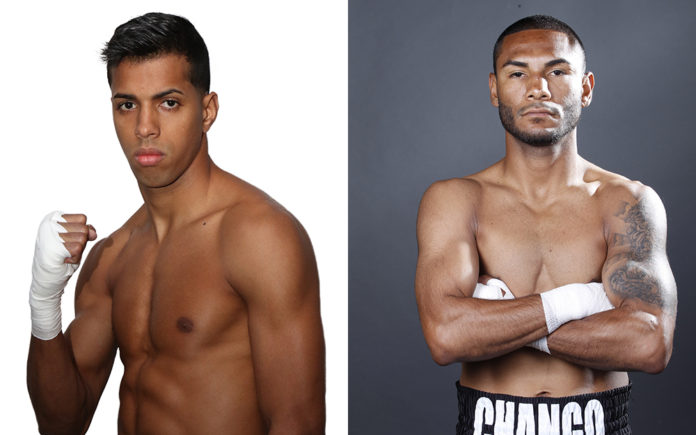 Two world title fights will head to the Coachella Valley on February as Golden Boy Promotions presents another exciting night of boxing on DAZN. In the main event, Alberto “Explosivo” Machado (21-0, 17 KOs) will defend his WBA Super Featherweight World Title against Andrew “El Chango” Cancio (19-4-2, 14 KOs) in a 12-round clash. In the co-main event, Rey Vargas (32-0, 22 KOs) will put his WBC Super Bantamweight World Championship on the line against Franklin Manzanilla (18-4, 17 KOs) in a 12-round battle. The event will take place on Saturday, Feb. 9, 2019 at Fantasy Springs Resort Casino in Indio, Calif. and will be streamed live on DAZN – which is just $9.99 per month after a one-month free trial.

“Golden Boy Promotions has promised to bring exciting fights every month on DAZN,” said Oscar De La Hoya, CEO and Chairman of Golden Boy Promotions. “We’re keeping our promise by bringing two world title fights featuring a world champion from Puerto Rico in Alberto Machado and one from Mexico in Rey Vargas. The best talent from these two countries, which have a rich history in the sport of boxing, will be on display for fans to watch at Fantasy Springs Resort Casino or from home on DAZN.”

Machado, a 28-year-old of San Juan, Puerto Rico, is a big man for his division and boasts explosive power in both hands. After unifying two regional titles with a dominant unanimous decision victory against Carlos “The Solution” Morales, Machado defeated Jezreel “El Invisible” Corrales by way of eighth-round knockout to capture WBA Super Featherweight Title in Oct. 2017. The hard-hitting southpaw has retained his title against the likes of Rafael “Sweet Pea” Mensah and Yuandale “Money Shot” Evans and will look to make a third defense against Cancio.

“I am very hungry to go to Los Angeles and start camp for Andrew Cancio,” said Alberto Machado. “Cancio is a great warrior with good experience and will come very hungry, but I will prepare myself responsibly as he is a great challenge for my career. A victory over him will take me further to what I want to achieve in this sport. This will be the third defense of my title, and now I am going in with more experience. I look forward to retaining my championship and returning to Puerto Rico as a world champion.”

Cancio is a 30-year-old contender who recently re-signed with Golden Boy Promotions after scoring a sensational technical knockout victory against then-undefeated prospect Aida Sharibayev. The native of Blythe, Calif. has victories against the likes of Rocky Juarez, Jerry “The Corpus Christi Kid” Belmontes and Rene “Gemelo” Alvarado, and he’s also been in tough fights against Joseph “JoJo” Diaz Jr. and Ronny Rios in a professional career that started over 12 years ago. Needless to say, Cancio has worked hard for his title shot.

“I’m very excited and grateful for this opportunity to fight for a world title,” said Andrew Cancio “Thanks very much to my manager Ray Chaparro and the Golden Boy Promotions Team, along with DAZN. I’ve watched many of Alberto Machado’s fights and know how great of a fighter he is. However, I’ve already started training and will be well prepared on February 9 to win the world title in front of my fans at Fantasy Springs who have always been so very supportive.

“We are excited to start 2019 with a great fight for Alberto Machado on DAZN,” said Miguel Cotto, President of Miguel Cotto Promotions. “We are committed together with Golden Boy Promotions to bringing the best fights with the best fighters in the world. We know what Machado he is capable of doing. He will enter the ring as a champion and leave the ring as a champion on February 9″

As mentioned above, Rey Vargas will defend his 122-pound title against Franklin Manzanilla in the 12-round co-main event. Vargas is a 28-year-old world champion who brings a considerable height and reach advantage to every fight, which he has used to defend his titles against the likes of Ronny Rios, Oscar “El Jaguar” Negrete and Azat “Crazy A” Hovhannisyan.

“Franklin Manzanilla is a complete fighter,” said Rey Vargas. “He’s tough and goes forward, but he also knows how to box. He’s a strong fighter, and he showed that by defeating Julio Ceja in four rounds to earn the right to fight for a world title. Manzanilla also hits hard. I’ve seen this, and his record indicates that as well. However, I also believe he has some deficiencies in his defense, and that’s what we’re going to try to take advantage of in this fight. Lastly, I invite all the people to watch this fight because it’s going to be a war, and God willing I will walk away with my hand raised high.”

Manzanilla is a 30-year-old native of Caracas, Venezuela who will fight in the United States for the first time. Manzanilla is coming off a victory against Julio Ceja for the WBC Silver Super Bantamweight Title, earning him a shot at Vargas in February.

“I’m training very hard to be well prepared,” said Franklin Manznilla. “However, we still haven’t even begun the hard stages of preparation that will have us in excellent condition to give everything in the ring. Rey Vargas is a great fighter who is always well prepared for his fights. He throws a lot of punches, which means we have to be double prepared for this bout. It’s going to be a great fight, and I invite everyone to watch it because they will witness a great upset and will get to know Franklin Manzanilla, a fighter who is preparing physically and mentally to become the new world champion.”

“Rey Vargas is the best super bantamweight in the world,” said Oswaldo Kuchle, President of Promociones del Pueblo. “He will put on a great show on Feb. 9 with his excellent boxing skills. Without a doubt, I think it will be a great and explosive fight that will delight fans in the arena.”

The undercard of this event will be filled with contenders and prospects from the exclusive Golden Boy Promotions stable.

Oscar Duarte (15-0-1, 10 KOs) of Parral, Mexico will participate in a 10-round fight in the lightweight division.

Azat “Crazy A” Hovhannisyan (15-3, 12 KOs) of Los Angeles, Calif. will compete in a 10-round super bantamweight fight.

Hometown hero Rommel Caballero (4-0, 3 KOs) of Coachella, Calif. will open the night of action in a six-round super featherweight battle.

Opponents for the undercard fighters will be announced shortly.

Machado vs. Cancio is a 12-round fight for the WBA Super Featherweight World Title presented by Golden Boy Promotions and Miguel Cotto Promotions. Vargas vs. Manzanilla is a 12-round battle for the WBC Super Bantamweight World Championship presented by Golden Boy Promotions in association with Promociones del Pueblo. The event is sponsored by Tecate, “THE OFFICIAL BEER OF BOXING,” and Hennessy “Never Stop. Never Settle.” The event will take place Saturday, Feb. 9, 2019 at Fantasy Springs Resort Casino in Indio, Calif. and will be streamed live on DAZN.