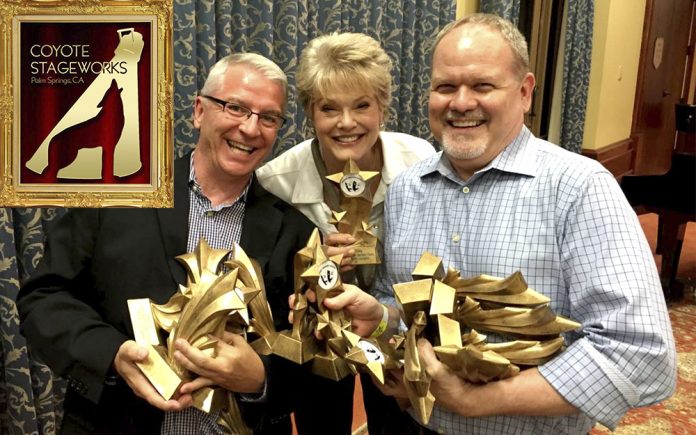 Pulitzer Prize winning playwright, Thornton Wilder, (Our Town,) wrote an essay called “Some Thoughts on Playwriting.” In his essay, he explains what makes theatre unique from other art forms.  Wilder lays out four fundamental differences:

And just as each script and each performance is different from all others, so is the theatre that produces it.  We often fail to realize that each producer of stage, has their own personality and perspective.  Some prefer classics, some new works, some lean towards comedy, some present more drama.  But each is vital to the lifeblood of American theatre.

Here in the Coachella Valley, we are extremely fortunate to have a variety of theatres, each with their unique production goals, but all equally valuable.  And that is why it is a tragedy to lose a piece of the Coachella Valley theatre community.  The past year has wrecked devastation on lives all across the country.  Most businesses were forced to close or make serious concessions in an effort to survive the pandemic.  The theater world was hit especially hard.  Individuals crowded into a closed environment for several hours at a time has been the antithesis of the necessary heath requirements.

Theatres depend on ticket sales in order to produce plays, that’s a given. And when they are unable to produce shows, they are unable to sell tickets.  On June 7, 2021, Coyote StageWorks,  announced that after 13 years of tireless work, Founding Artistic Director, Chuck Yates, and their board of directors, decided to close the theatre company.  The cancellation of the 2020/2021 season had been financially devasting for them and the Coachella Valley would lose a treasured theatre. Yates, said that it was his life-long love of theatre that had inspired him to create Coyote Stageworks. He wanted to have a company that focused on quality acting, regardless of the show’s budget.

Yates stated, “We set out to tell good stories and tell them well. And we did… Coyote StageWorks paid EVERYONE involved in our productions a salary, not a stipend, or gas fare… a salary. We paid Equity and SSDC Pension & Healthcare for those members. I trusted my actors and designers, and even my stage crew to collaborate in the total vision. Knowing that their ideas were almost always better than mine, and to let them run with those ideas. Artists feel invested when they feel trusted.  I also trusted myself on when to and when not to say the word “No.” But paying artists? That was extremely important to me from the beginning. And it showed.”

Over the years, Coyote StageWorks produced many acclaimed productions. Highlights include “Boeing, Boeing,” “The Andrews Brothers,” “Suds,” “Dirty Blonde,” “The Women” (the theatre company’s annual benefit gala), “Tru,” “Art,” “Buyer & Cellar, “Agnes of God,” ”Love, Loss, and What I Wore,” “The Lady with All the Answers,” “The Understudy,” “Greater Tuna,” and “A Doll’s House Part II,” among others.” Many of these productions received local and regional awards and all received critical acclaim, with three productions transferring to theatres outside of the desert area for longer runs. Not to mention an impressive 91 Desert Star Awards.

Yates, summed up the decision to close the theatre, this way.  “It is most definitely due to the pandemic and its effects on gathering people. The uncertainty of audiences feeling safe enough to go back inside a theater. Also, Actor’s Equity requirements to do so are daunting, even the price of lumber to build sets has skyrocketed. The times are different and needs change. It’s time for me to push a different rock up a different hill. The torch is officially passed.”

Yates indicated that, “Our rich legacy will live on through the Palm Springs Young Playwright’s Festival, which will continue and thrive. The Festival was designed to help discover and nurture the next generation of writers from local middle and high school students, and that is exactly what it will continue to do as an independent entity.”

Bravo to Coyote Stageworks and their years of dedication to the Coachella Valley Theatre community. A Standing Ovation for their final curtain call.