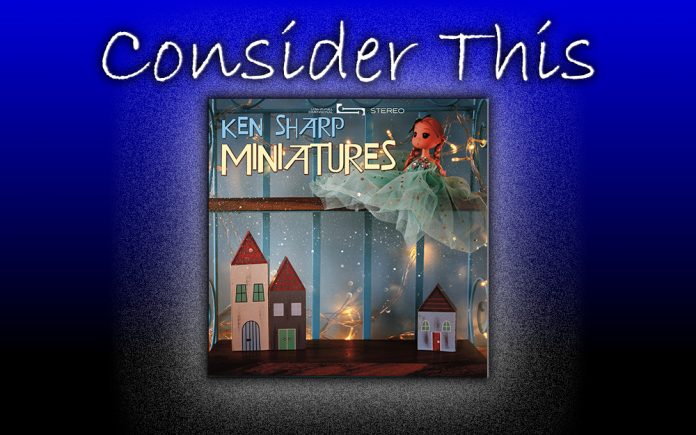 There aren’t too many musicians that would have the audacity to create an epic 32-song set, whereupon no song is longer than two minutes. But Ken Sharp manages to pull off the impossible with his endlessly inventive album, Miniatures.

Something of a polymath, Ken first gained attention as a Rock N’ Roll historian. A New York Times best-selling author, he has written, or co-written books about everyone from Bowie, John & Yoko, Elvis Presley, the Raspberries, Cheap Trick and Kiss, as well as definitive tomes on the Wrecking Crew and Power Pop. But his first and forever love is making music.

He came of age in the late ‘60s/early ‘70s in the City Of Brotherly Love. As a kid his ears were glued to his transistor radio, and he soaked up everything from the Beatles and the Beach Boys to Philly Soul, The Who and the Four Seasons. Soon enough he was completely besotted with Motown, especially Stevie Wonder. When a neighbor kid down the street started playing Kiss songs on an electric guitar, Ken figured it couldn’t be that difficult. Although his family really didn’t have the dough, his Grandpa managed to get him a red Electra (a knock-off version of a Gibson SG) and he was off.

Once he became a skilled guitar player, he added keys, bass, ukulele and electric sitar to his musical arsenal. He made his bones in nascent combos like High Tide and The Michael Paul Band. Once he finished school, Ken set aside his Rock N’ Roll dreams and did the next best thing, he became a music scribe. He quickly became a go-to guy for liner notes and documentaries. But the itch to play music never went away.

By 1994, he’d accrued enough original songs and secured sufficient financial support to head into the studio. The result was his solo debut, 1301 Highland Avenue, an album that was warmly embraced critics and fans alike. At the close of the 20th century, he signed with the respected indie label, Not Lame Records and released his sophomore effort, Happy Accidents.

In 2001 he relocated to Los Angeles, but six years sped by before his third album, Sonic Crayons arrived in 2006. Living in L.A., he became a go-to opening act for like-minded artists like ex-Babys vocalist, John Waite and perennial teen-heartthrob, David Cassidy. He crossed paths with musical Mad Hatter Fernando Perdomo while working on a documentary at Fernando’s Reseda Ranch Recording studio. Ken hit it off with the protean musician/producer and the pair ended up co-producing Ken’s fourth long-player, New Mourning.

Despite the fact that it had been nine years between albums, fans and critics remained delighted. His songs even managed to garner airplay on Little Steven’s Sirius station, Underground Garage, as well as Rodney Bingenheimer’s taste-making KROQ show. After a remarkably quick, two-year turnaround, Ken once again enlisted Fernando to co-produce and play a surfeit of instruments on his fifth album, Beauty In The Backseat. Cycling through a plethora of styles, the album satisfied his growing legion of passionate fans and received rave reviews.

When the pandemic hit, rather than rest on his laurels, or lounge on the couch in his Underoos binge-watching “H.R. Puffenstuff” reruns, he followed his muse, writing and recording a clutch of new tracks. Occasionally, a perfectly formed song would last a minute or two, tops. He dubbed those compositions “miniatures.” He sent a few to his pal, John Sellards, who said he wished Ken would make an entire album of only these breviloquent gems.

Encouraged, he figured out that he already had at least 20 songs that fit that precise criteria. Realizing that wasn’t quite enough for a standard album, he challenged himself and inspiradio struck. He managed to create 12 more tracks, and now the finished product, aptly entitled Miniatures has arrived.

The record crackles to life on the opening cut, “Me & My Big Fat Mouth.” Ken’s winsome tenor crests atop cascading guitars, bass, mellotron, synth, bell tree, propulsive maracas and percussion. Adroit and economical lyrics offer a wry mea culpa regarding a bit of verbal diarrhea; “If I could take it all back, I’d do it in a minute, really screwed up from the start to the finish/Yeah I left no doubt, me and my big fat mouth.”

The prospect of listening to 32 songs in one sitting seems daunting, but Ken hopscotches through plenty of musical styles. Indelible melodies partner with snappy arrangements, and each song feels like its own tiny universe. From the Folk-inflected “Day In, Night Out” to the mournful piano ballad, “Lorelei,” and the wintery grace of “Every Day Is Holly Day.” Then there’s “4AM,” a skronky, insomniac’s lament featuring backwards guitar, the twee and intricate “Dollhouse,” the woozily exotic “Best Friend,” the breathless pep talk of “Moving On” and the pastoral majesty of “Growing Up Fast.”

Of course, Ken occasionally wears his influences on his sleeve, which means “Drivin’” navigates the same Power Pop hairpin turns that the Raspberries explored nearly 50 years ago. “I Need A Friend” recalls the plaintive and lovelorn croon employed by Rock & Roll Hall Of Fame inductee (fuckin’ finally), and Renaissance man Todd Rundgren. Meanwhile, “Count On Me” is the kind of tender and perceptive encomium that dotted Carole King’s epochal “Tapestry” album.

The album’s first couple of singles, “Susannah Silently Shining” and “World Of Wonder” are a sharp study in contrasts. The former is a sly slice of Sunshine Pop blending treacly vocals, wistful woodwinds and some meandering mellotron. The lyrics are littered with forget-me-nots; “Susannah, please don’t forget about me, send a postcard from Carolina, in the air is where you should be, Susannah, silently shining.”

The latter wouldn’t feel out of place on one of those trippy Rankin/Bass Puppet-animation TV specials from the late ‘60s like “Rudolph The Red-Nosed Reindeer” or “Santa Claus Is Comin’ To Town.” Whimsical vocals lattice over twinkly harpsichord and burnished guitars. Wide-eyed lyrics celebrate the Yuletide; “It’s a world of wonder, the spirits so bright, all across the town, tinsel hanging down, It’s a world of wonder, such a world of wonder for me.”

In an album packed with stellar tracks, several stand out. “A Kind Of Blue And Smokey Too” briefly and brilliantly pays homage to both Jazz great Miles Davis and the legacy of Motown in one fell swoop. While the title suggests the melody and instrumentation should be steeped in Hard Bop or Hitsville, Instead, stacked guitars, vibes, keys and bell tree create a sleek Sophisto-Pop sound that recalls Paul Weller’s post-Jam aggregate, The Style Council. “Rise” is an urgent Rocker, lithe and lilting, the buoyant melody is anchored by a wall of guitars, flinty bass lines, mellotron, vibes, bell tree and a conga-fied beat. Ken’s sunny vocals wrap around a mission statement of sorts; “A man’s not a man if the woman he loves is in need of some protection and somehow rise above.”

The Bubblegum crunch of “Something’s Happening” is simply irresistible (but not in a louche, Robert Palmer way). Crisp acoustic riffs collide with taut tremolo chords, electric licks, rubbery bass, stately piano and jingle-jangle sleigh bells. Swoony vocals wrap around lyrics of love and devotion; “Sometimes I wake up early in the morning, I just stare and stare at your face, such a beautiful soul full of passion and filled of grace.”

Stripped down to acoustic and electric guitars plus piano, “Stack o’ Records” speaks to the power of music; “I got a stack of records I saved for a rainy day, pull out some sad songs, the kind that mama used to play/A man for all seasons, stuck on the dial, play me some Elvis; let the King sing in style and forget about my troubles for a while.” Despite Ken’s assertion that he’s spinning “nothin’ later than ’65, the melancholy arrangement evokes some Big Star déjà vu.

“Black Coffee, Cigarettes And Bach’s Minuet” executes a bit of a stylistic 180. Here Ken manages to transform mellotron, bell tree, acoustic, electric and ebow guitars into some breezy Tropicalia. Lyrics somehow conflate Gene Kelly and Ricky Ricardo and the action all takes place at the Babalu; “Gene Kelly had his fun, drinking Jamaican rum, nothing we couldn’t do, times at the Babalu.” Clocking in in just under 50 seconds, “Follow” blends stutter-step acoustic guitar, descending bass lines and some wobbly Moog notes. The lyrics manage to both pledge undying fealty and name-check a Bob Dylan classic; “If I could go back, it’s all in my head, visions of you and Johanna instead, let me follow, let me follow, let me follow you.” Conversely, if “Hunky Dory” era David Bowie ever collaborated with Keith Partridge, it might have sounded something like “Down The Drain.” The song boasts rippling guitars thready bass lines, a wash of piano, organ and bell tree, bookended by maracas, handclaps, paper percussion, tambourine, gong and drums.

He even includes an elegant elegy to Zach Nilsson on “You’ll Be Known.” Son of the legendary singer-songwriter, Harry, Zach followed in his dad’s footsteps and was a stalwart of the close-knit L.A. music community. He lost his valiant battle with cancer in March. Ken’s tender and ornate piano ballad is Rundgren-esque in all the right ways. Hopeful lyrics wish that something, anything will ease the pain of losing Zach.

Finally, on “If I Called You,” Ken’s honeyed harmonies are matched by sun-dappled guitars, sparkling bell tree, wiry bass and quiescent percussion. A romantic cold-call goes slightly awry by evoking some biblical imagery, while attempting to make a love-connection; “If I found the strength of Mary, Joseph and the Saints, would you find it strange that I’ve been thinking of you? If I called you up…” Ken is something of a one-man band for most of the record, but Kaitlin Wolfberg adds violin and viola to “I Am Here” and “You’ll Be Known.” Meanwhile, Fernando Perdomo pitches in here and there on bass, congas, drums, tambourine and gong.

Other interesting tracks include the smoochy daydream of “This Kiss,” the puckish “Jeanne, I Will Remember,” the searching “When You Fall” and the jittery “Clara Baby.” “My Lullaby” is suitably “Beatlesque and the piano-driven “Perfect Sun” mines the same ache as Big Star’s “Kanga Roo.” The album closes with the toy-pianoed farewell of the title track.

More than half a century after Beach Boy, Brian Wilson aspired to create a “teenage symphony to God,” Ken Sharp has created a pocket version. Miniatures offers a kaleidoscopic soundscape that is short, sharp and most definitely sweet.