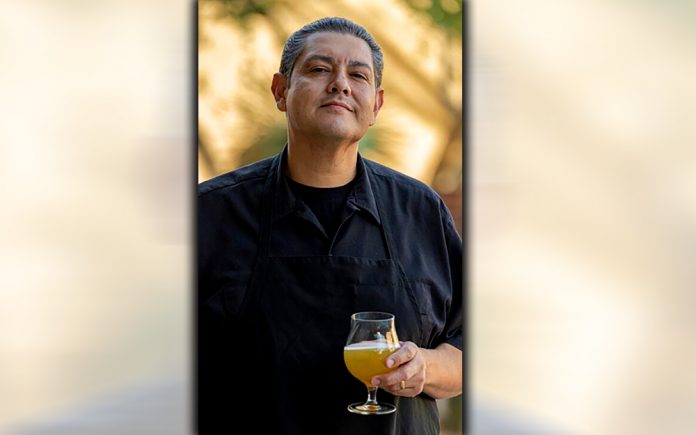 Perhaps you’re already thinking that the Vino Voice has been out in the desert sun a little too long now—and it’s barely summertime! For why would such a reputable wine column write on Cream Sherry when it’s over 100 degrees outside. Everyone knows a delicious cream sherry is a wonderful dessert wine in the winter—so why not talk about it when “baby it’s cold outside”?

Well—get over that assumption! Right now in modernism Palm Springs & its surrounds, wine lovers are snuggling up to world class cream sherry no matter what the temperature. So as you’d expect, we’re on this story stat! And get this: we’re not enjoying our cream sherry as an aperitif, nor, as an after-dinner dessert, but we’re pairing it with a wood fire pizza (Calabrian chili added) over at the Persimmon Bistro & Wine Bar at the Palm Springs Art Museum. Now how cool is that!

You loyal readers will perhaps remember our last Sherry article—four years back,

https://coachellavalleyweekly.com/my-sherry-amour. We got a pretty good response for a wine that seemed past its time, according to a bunch of wine folk. But—whether it was fueled by our article, or not, no other fortified wine in our desert and beyond have seen a renaissance with drinkers quite like sherry. Gone are the days where this style of fortified wine was synonymous with cocktail mixers, dusty bar shelves and grandparents’ sipping. In current times, sherry is seeing a revolution like never before and rightfully so. These complex wines, from the light and saline finos to the sweet olorosos, hold their own against a variety of other still and unfortified wines.

It’s a fortified wine, which means that grape brandy is added to the fermenting must or the fully fermented wine. The time in which the brandy is added determines how dry or sweet the final wine will be, generally clocking in between 15% and 20% alcohol. And contrary to popular belief, most sherry wines are in fact vinified dry.

Should you have the interest, click on to the “My Sherry Amour”, above, to catch up on fino sherry. But here we’re chiming in on Cream Sherry. The sweeter sherries are made from a grape with either a human or a horse name: Pedro Ximénez or Palomino. Oloroso is a great style of oxidated sherry that comes both dry and sweet, but a Cream Sherry is specifically a sweet oloroso, which picks up dark colors, rich flavors, notes of dried fruits, figs, raisins, caramel and more from its own style of oxidation.

So—just last week I met up with the lovely Maureen Perez, who is our valley’s representative of the famed Stone Brewery. She is the best when it comes to providing the freshest brews and IPAs to our market venues. And she happily supplies the Persimmon Bistro & Wine Bar, and is great friends with owner Art Vasquez—who obviously knows about beer and was present for our sherry tasting. 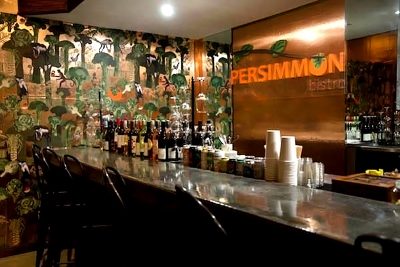 Art might be best known as the driving force behind the success of Babe’s Brewhouse from 2003 to 2018, guiding the restaurant to win many local awards for its food, and multiple international awards for its beer.

But it’s Vasquez’ love of both California’s central coast and wine country that is prominently displayed at the Persimmon Bistro. CV Weekly recently wrote: A tour of the cozy café displayed all the Mediterranean flair of California’s wine country in both Persimmon’s ambience and menu, successfully bringing the vibe of Santa Barbara County to Palm Springs. The newly added outdoor pizza oven provides a portal to zesty ingredients and the opportunity to expand the restaurant’s menu selections of artisan wood fire pies.

Another main staple of the menu are the customized charcuterie cheese boards, and a plethora of appetizing selections like house-made tapenade and hummus, flights of olives, fig jam, and mixed nuts and dried fruit. It was here at Persimmon that we tasted through my personal selected sherries that paired wonderfully with Persimmon’s artisan pizza.

The most well-known Cream Sherry is also the oldest. Harvey’s Bristol Cream ($14) was created in the 1880’s and has been the top selling sherry brand since the 1950s. Full of sweet raisins and dates, caramel apple and hints of hazelnuts, this wine is lighter than you would expect from the name, but still sweet and lush.

Everything that goes into making Gonzalez Byass Matusalem VORS Cream ($50), sets it up for greatness. Some of the solera blend used is fifty years old! All of the grapes that go into this wine are grown in Gonzalez Byass’ own vineyards. The final blend is approximately 75% Palomino and 25% Pedro Ximenez, maintaining a careful balance of sweetness and acidity and herbal savory notes; deep oak, leathery notes and dark chocolate. A certain heat as well, probably because of the many herbs and spices (cloves, soft pepper), roasted nuts & Espresso; some tangy lemon in the background. A gem!

Bodegas Dios Baco Cream Sherry ($25). This is complex and on the dry side, with caramel, dried fig and iodine flavors that intensify as it stays on the palate. Terrific finish, with a lingering aftertaste of molasses, nuts and a slightly burnt note.

Hidalgo La Gitana was founded in 1792 and has been family owned ever since. To make the Alameda Cream ($25), they use incredibly ripe Pedro Ximénez grapes that have been left to hang on the vines in the sun to concentrate its sugars before aging in old oak casks that slowly age and oxidize the wines to create its full body and intense personality. Even at the minimum sugar level required to be considered a Cream, its aromas fill the senses with dried fruit, raisins, crème brûlée, candied ginger and walnut hulls. See ya at Persimmon—Cheers & Sweet Dreams!