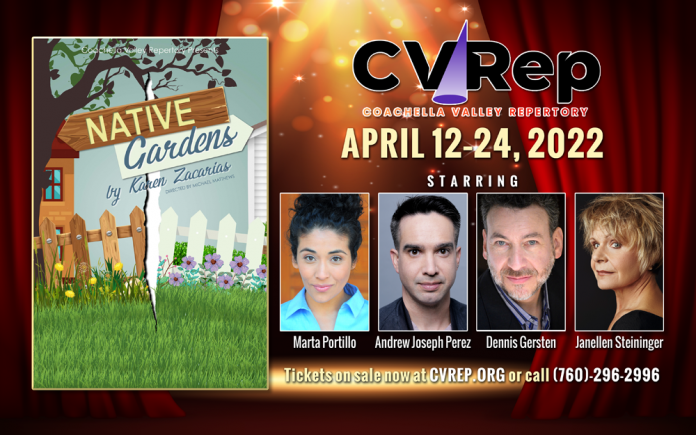 Tania yearns to build a fence and transform her yard into a native garden of the local region, based on her culture and aesthetic. Neighbor Frank has a more conventional notion of what a garden should look like. Civility and kindness fades, as the gloves come off and the digs start. Frank and Tania ultimately reveal their biases towards each other, when a twist of fate amplifies their conflicting vision for Native Gardens. All emptions are on display for the audience to share, as Tania and Frank struggle to reclaim their humanity, despite learned judgments. Native Gardens will be performed at CVRep, April 12-24, 2022. Tickets are on sale now at www.cvrep.org or by calling (760)-296-2996 ext. 115.

Andrew Joseph Perez stars as high-powered lawyer, Pablo. Perez is an LA-based actor, singer and stuntman. He can be heard narrating audiobooks on Audible and iTunes, and he’s voiced characters in Gundam Seed Destiny, Dragon Pilot, Luis Miguel, Unauthorized Living, Dynasty Warriors 9, and more. He has appeared in In The Heights (Musical Theatre West), The Elaborate Entrance of Chad Deity (Capital Stage & San Jose Stage), Fiddler on the Roof (Music Circus), The Secret Garden (Mainstreet Theatre) and more. Starring as Pablo’s wife Tania is Marta Portillo. Portillo is an LA-based actor. Her recent credits include: NCIS: Los Angeles, Optika Piñata an immersive theatre experience at the La Jolla Playhouse Pop Up Without Walls event, Señor Plummers Final Fiesta with Rogue Artists Ensemble and Island of the Blue Dolphins with the Laguna Beach Playhouse. Next door neighbors, Frank and Virginia, are played by actors Dennis Gersten and Janellen Steininger. Gersten performed at CVRep in The Chosen and How I Learned to Drive. Some of his theatre credits include: The Hairy Ape and Tempest Redux (Odyssey Theatre), The Cask of Amontillado (The Huntington), Son of a Bitch (Hollywood Fringe), Macbeth Revisited (New American Theatre) and more. Steininger is delighted to make her CVRep debut after patiently waiting two years. Her most well-known appearances include: Maria Vasilyevna Voynitskaya in Uncle Vanya. She has also appeared in the original cast of its precursor, The Wood Demon and A Flaw in The Ointment (The Mark Taper Forum).  Steininger’s television credits include: Sleeper Cell, Roseanne, Strong Medicine and other independent films.

About the Playwright Karen Zacarías

Karen Zacarías is a Latina playwright who has born in Mexico in 1969. She is known for her play Mariela in the Desert. It was the winner of the National Latino Playwriting Award and a finalist for other prizes. She is one of the inaugural Resident Playwrights at Arena Stage in Washington, DC, and is a core founder of the LatinX Theatre Commons. She is the founder of Young Playwrights’ Theater, an award winning theater company that teaches playwriting in local public schools in Washington, DC. Learn more at www.karenzacarias.com