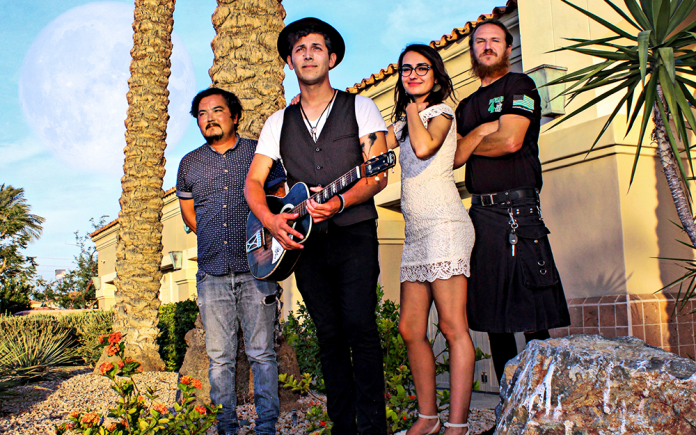 Founded and conceived by singer/songwriter/guitarist and frontman, Brent Simpson, Daytime Moon has a unique and ever evolving sound that is continuously honed and shapeshifting throughout time. I first encountered Daytime Moon in 2016 at our once beloved and now unfortunately defunct, Schmidy’s Tavern. I was there to check out another band and ended up encountering this band whose frontman I was already somewhat familiar with from one of his other projects so I stuck around for their set. It’s been a long time since then but I clearly liked them enough to reach out for an interview which I referenced while writing this piece in order to refresh my own memory on what I had to say about Daytime Moon back in the day.

Daytime Moon has been around in one form or another for well over a decade. To understand Daytime Moon as an ever-transitioning, musical entity, you must understand the band’s founding father and frontman, Brent Simpson. The reason I refer to Simpson in such a way is due to the fact that he will readily admit that even though he plays many musical roles in many functioning musical projects…Daytime Moon is essentially his baby. 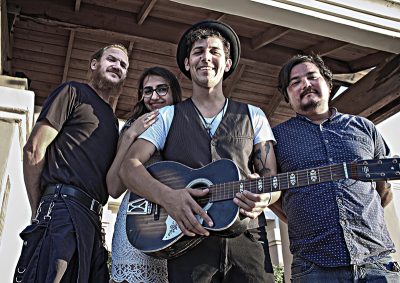 Simpson: “When it comes to Daytime Moon, I’m pretty much the main songwriter. Whatever instrument I’m playing kind of depends upon the song. For instance, in some of our older demos I play drums, piano, guitar, bass and sing my own backup harmonies. But, when you see us live, I typically play guitar and harmonica and do the frontman stuff.”

Another aspect of Daytime Moon that is pertinent to who and what they are is the fact that every member is a multifaceted talent on their own who happened to be connected to a whole lot of other musical endeavors that vary greatly from one another in numerous ways as far as styles and genres. Details that can only bring together a plethora of skills and points of view that make everything that much more intriguing.  I have been known to lovingly describe the desert music scene as, “somewhat incestuous” in the sense that we tend to be very tightknit and so many local musicians and vocalists are in multiple projects that it all starts overlapping after a while. Daytime Moon and the surrounding bands they are connected to are a perfect example.

In addition to founder & frontman, Torrance Brent Simpson II, AKA, “Brent Shreds” Daytime Moon consists of Daniel Hovis on bass and backup vocals, Kevin Patterson on drums and Lara Bennett on guitar and backup vocals. In order to effectively play a proper round of a game I just made up called, “Six Degrees of Daytime Moon,” I had to ask Simpson in addition to this band, how many musical projects he is a part of and then go from there.

Simpson: “I play guitar and bass in a band called, “Shaman Rock,” with Daniel and Eric Gailor. I play in Spankshaft where I started out on lead guitar and have switched back between guitar and bass over time although that band isn’t really doing anything at the moment. Then there are the California Celts (Scottish/Irish traditional and fusion) where I play bass and sing backup, which is the same with Warsaw Poland Brothers (ska/punk fusion).  During the time of Oktoberfest, the California Celts become the Kalifornia Krauts for polka music which is fun. In addition to those I play bass in a band called The Mod Professor (surf rock). Most of these bands are basically reformations of the California Celts. Same musicians playing different music, depending on the gig. I also play guitar and banjo in the Larry B band.”

CVW: “You have proven yourself proficient in so many instruments and genres over the years and I know that your brother is similarly talented which naturally causes me to assume that you come from a musical family seeing as that is how these things usually work. Is that a safe assumption?”

Simpson: “Yes, for sure! I don’t know how many generations of musicians there are but there’s a lot. According to the research, we have an ancestor that came from Spain with Columbus who played in a band on the Santa Maria or one of those boats. I think he played the loot. My mother’s maiden name is, “Yanes” and when she traced back our history the name seems to be connected to guitar makers.”

Simpson continues: “All of my siblings play instruments. My sister plays the flute and the piccolo and she has 8 kids in Idaho who all play instruments and sing and it’s so cool! My little brother moved to Vegas and he plays the uke and guitar and actually has a rap project. My dad plays guitar, my mom’s mom played the organ and I think her dad was a drummer. It goes way back, you know? As early as I can remember, my dad was putting a guitar in my hands”

CVW: “So being a musician was basically something that was always fostered and encouraged and a basically normal part of your life?”

Simpson: “Definitely. We played our 1st show when I was in 5th grade at The Palms in Wonder Valley. It was me, my older brother Brandon and my best friend, Mark who played drums and his brother Sammy played guitar. My brother was in 7th grade and his voice was changing and I played a bass bigger than I was”

CVW: “So basically what you are saying is, this is the only life you know?”

Simpson: (Laughing) “Yeah, and I’m so glad I’m not not just known as being in the little kid band anymore.”

CVW: “You truly do have a rich history as a musician coming from Joshua Tree considering your still young age. We could go on for hours about it all for sure but now I am going to ask you to say something about your Daytime Moon bandmates.”

Simpson: “Let’s start with Daniel Hovis. I’ve known that guy since like, 7th grade. We went to school together and were in the, “emo kid’ group. In highschool he wore a tie all the time and everyone thought he was Billy Joe Armstrong or something. He had his own band and is actually a really great songwriter on his own. I’ve actually been encouraging him to release some of his own stuff because it’s really good. He’s also a really good singer as well. It’s a long story but I ended up stealing him from my drummer’s side-project. We actually go so far back that my brother Brandon wrote a song about him, believe it or not. It’s called, “Daniel Havis Got a Gun.”

Simpson: “Next would be Kevin Patterson who made our t-shirts. He has a successful t-shirt printing company called, Product Printing. He was playing with the Celts anr Warsaw. I had booked them up in Joshua Tree before and wasn’t sure if he was too busy or too cool to play with us but he ended up filling in for us on a few different shows. We wanted to lock him in so he basically agreed to play drums for us if I would play bass for Cali Celts like a trade.  He learned the songs quickly. He has been doing this for a long time and he truly is a world class drummer.”

Simpson: “That would lead us to when we got booked at Joshua Tree Saloon and the person who booked us was none other than our very own, the very beautiful Lara Bennett who is now in the band. We hit it off as friends and then one day when we were hanging out she just picked up my guitar and started playing it. I was like, “Hey! You play guitar? You should join the band and that would free me up to do other things. She was a little hesitant at first but here we are. She also has a really cool podcast that everyone should check out called, “Peddle Motel Podcast.” She interviews some great guests.”

CVW “In addition to your most recent release, “You are the Dusk, I am the Dawn,” you have released some videos and have been performing shows around the desert as well as out of town. Do you have anything else you are up to?”

Simpson: “Actually, I released a guitar meditation album that was released only on our Bandcamp so a lot of people don’t really know about it yet. We have some videos on Youtube. It’s all guitar, using different acoustics that I have with different microphones. They’re all instrumental and meant to be a good, ambient situation whether you’re driving or doing yoga or meditating or whatever mood you might want to set. People listen to music for all kinds of reasons and I saw this as a good excuse to try something a little different.  It’s currently only on our Bandcamp but I think we are looking to release it on some different platforms soon so I’m looking forward to seeing how that goes.”

Check out all that is Daytime Moon and beyond www.Daytimemoonmusic.com

Lots of shows on reverbnation and bandsintown app