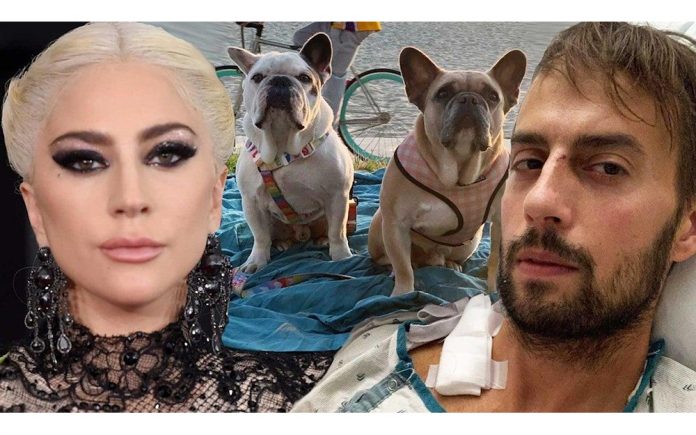 It was a brazen robbery by gun wielding men of two French bulldogs in an upscale Los Angeles neighborhood. The news traveled around the world when it was revealed the valuable canines belonged to Lady Gaga.  The thieves shot Ryan Fisher, Lady Gaga’s brave dog walker, who valiantly tried to fight them off.  When neighbors rushed to Fisher’s aid, they found a third French Bulldog named Asia cradled and protected in his arms as he lay critically wounded.

Koji and Gustav, the two stolen dogs were soon returned, the thieves no doubt lured by the large $500,000 reward Lady Gaga offered for their safe return.  Initially, the police did not know the woman who returned the dogs was connected to the crime.  She explained she found them wandering loose in an alley.  This week, that woman and 4 others were arrested and face a variety of charges including conspiracy to commit robbery and assault by means of force likely to produce great bodily injury.  Detectives do not believe the suspects targeted these dogs because they knew the identity of their famous owner, but rather the great value of this particular breed was their motivation.  (Dogs are still considered “property” and the charges for “less valuable” canines would be the less serious charge of “theft”). 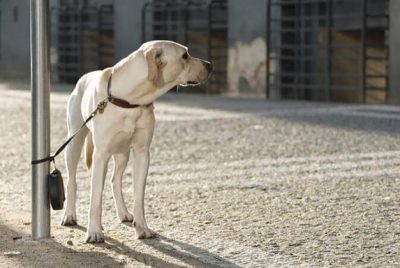 Dog lovers everywhere were stunned by the bizarre story, and relieved at the happy ending.  However, the incident illustrates how dog napping is on the rise during the pandemic.  While Americans spend more time at home, there is an increased demand for puppies and dogs.  That increased demand resulted in price increases for certain types of dogs, with French Bulldog puppies selling for as much as $10,000.  While higher priced dogs such as French Bull Dogs, Poodles, and Yorkshire Terriers are at higher risk, dogs of any breed and size are stolen.  A drug addict could steal any breed and sell it for $100 in quick cash.

Thieves, aware of the increased value of dogs, see them as a way to make a quick profit. In just a matter of seconds, you too could become the victim of a criminal “dog flipper” who sees your beloved pup as an easy way to make money.  Statistics put the number of dogs stolen each year at around 2 million.  Other motives for dog stealing include breeding for profit, and tragically for dog fighting rings.  Whatever the reason, the result is heart breaking for the dogs and the humans who love them. 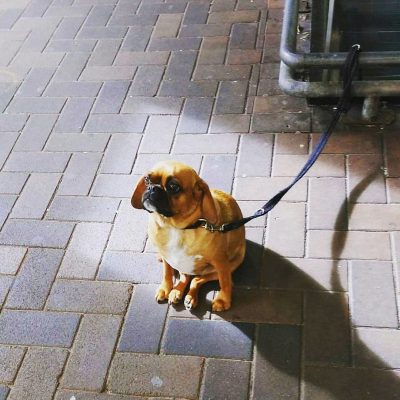 A recent local incident highlights the danger of theft to pets left in vehicles.  A Palm Desert resident made a quick trip into Albertson’s Market on Washington Street, leaving her Cattle dog inside the cab of her truck.  She was distraught when she returned to find the truck door wide open, chunks of fur everywhere, and her beloved pup missing.  Apparently this larger breed dog managed to fight off his kidnapper, and was found later that night in the parking lot across the street by a good Samaritan.  A microchip brought a quick reunion.  Leaving animals inside cars, even with the air conditioning on, is against the law.  It takes a thief only a minute to break a car window and steal your dog.  If you can’t bring your dog inside on your errands, leave him at home.

What can you do to prevent your precious dog from being stolen?  In advance, make sure they are microchipped, wear collars with ID tags, and consider the new “pet trackers” that reveal their location.  Take current photos.  Make sure your yard is secured by putting locks on the gate.  Thieves can see through fences and easily climb over them, so monitor them when they are outside.  Never tie a dog up outside a store while you dash in for a quick item.  Never leave them unattended in vehicles.  Keep them close to you when in public, including letting them go off leash to visit strangers.  Be cautions of strangers.  Be alert when out walking your dog, and vary your route. 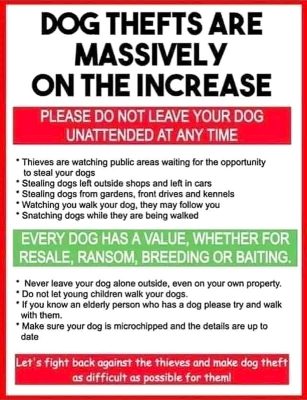 What can you do if your dog is stolen?  Immediately notify your microchip company.  Immediately notify law enforcement and file a police report.  Pets are valuable property and their theft is a misdemeanor or felony.  Advertising a REWARD will get your flyers and notifications more attention.  Post lots of flyers in the area where your dog was taken, and it may get the attention of the thieves.  While your reward may not be the size of Lady Gaga’s reward it may motivate the thieves who respond to your “no questions asked” guarantee.  Post your dog all over social media, including www.Nextdoor.com which will send your pup’s photo and plight to thousands of neighbors.  Another free website is www.PawBoost.com which goes out to some shelters and animal lovers.  Check with local animal shelters in case your dog escaped from the thieves or they abandoned him.  Facebook has many lost and found animal pages, including Lost and Found Pets in the Coachella Valley.  Check Craig’s List where thieves might attempt to sell stolen pets.

A bit of caution will keep Fido safe and home with you!