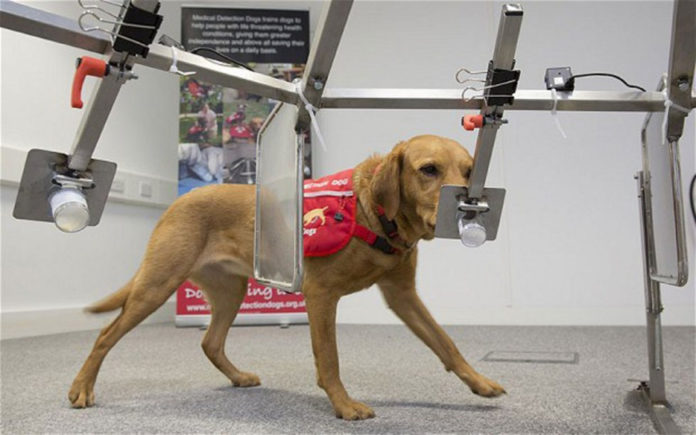 Dogs have an incredible ability to detect odors way beyond our human capacity.  They possess more than 25 times the number of scent receptors than humans, boosting their smelling ability by 100,000 times.  Dogs are used to detect drugs and explosives in airports, they help our military in combat locate land mines, and they work valiantly in search and recovery efforts to find missing people guided by their incredible sense of smell.  Now research shows they can play a significant role in sniffing out one of the most insidious human diseases – – – cancer.  Dogs are able to smell the different metabolic waste products that are released by cancerous cells.

Anecdotes abound about canines that sense when their owner has this serious illness.  Many of these stories have a similarity in that a dog became acutely interested in a certain targeted area of their human’s body.  Before the medical professionals diagnosed my sister-in-law with breast cancer, her dog Danny began laying close by her side and breast area, a shift in behavior that was not understood at the time.  During Deanna’s long illness, this sweet Spaniel became a constant comfort, arching his body around her as she lay in her hospital bed.

Dina Zaphiris, a Los Angeles dog trainer and medical scent detection expert, trains dogs to smell cancer.  She explains their unique connection to helping people, “Dogs and humans co-evolved, very few species have done that, and our survival depended on each other.  Dogs can smell things in parts per trillion.  For example, they can smell one drop of blood diluted in 20 Olympic swimming pools.”

Research underway at the University of Pennsylvania’s School of Veterinary Medicine is leading to a breakthrough using dogs to detect ovarian cancer.  This cancer is the fifth leading cause of cancer deaths in women, and currently no effective screening exists for its detection.  The dogs are exposed to tissue and blood samples from healthy individuals and those with ovarian cancer, receiving a reward when they alert on the cancer sample.  One of the dogs in the study, a Labrador, detected the ovarian cancer sample 100 percent of the time.

In another study, dogs were able to detect with 99 percent accuracy whether a breath sample is from a patient with lung or breast cancer.  They can detect skin cancer melanoma by simply sniffing the skin lesions.  The day is coming when dogs’ scent abilities become an accepted cancer screening method in the medical community.  Imagine that one day doctors will be able to take breath samples during routine physical exams, and send them to a lab for testing by dogs for cancer screening.

Scientists may soon ask, which is the better cancer detector – – – a laboratory or a Labrador?  Some medical specialists believe dogs will be integrated directly into patient care, while others recommend confining their skills to laboratories.

Not to be outdone, some cats may have the ability to detect cancer.  Best Friends Animal Society reports their fluffy white cat Leo, adopted by Barbara Bowman, might have saved her life.  The new cat always enjoyed sitting on Barbara’s lap, but suddenly he began pawing at the same area on one of her breasts.  This prompted her to schedule a mammogram which confirmed stage three breast cancer.  Barbara gratefully explains, “I never would have noticed the lump if it weren’t for Leo!”

Animal lovers already know that a wonderful dog in your home keeps you happier and heathier, reducing ailments ranging from depression to high blood pressure.  Now we are learning of yet another way these marvelous creatures save human lives with their instinct, intelligence and sensory abilities.