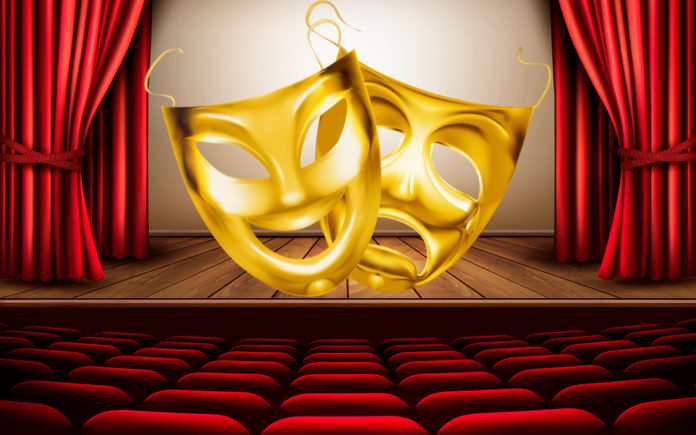 Welcome to the 2019/20 Season of theatre in the Coachella Valley. Time to fill the desert nights with song, drama, laughter and plenty of brilliant performances.  Take a look at the Opening shows and then visit the theatre websites for information on the shows that will follow in this exciting new season.

The complexities of marriage and friendship are examined with wit and intelligence in Dinner with Friends, Donald Margulies’ Pulitzer Prize-winning 1998 play about two married couples who have been friends for many years.

College of the Desert

At the McCallum THEATRE for the Performing Arts
760-340-ARTS or visit mccallumtheatre.com.

Just in time for Halloween, the College of the Desert Performing Arts presents THE ADDAMS FAMILY, a family-friendly comical feast that embraces the wackiness in every family. It features an original story, every father’s nightmare, Wednesday Addams, the ultimate princess of darkness, has grown up and fallen in love.

On the Twenty-First Century

DETC’s Ninth Season begins with its signature Season Opening musical revue, which is a benefit for the company’s Theatre Internship Program and Scholarship Fund. On the Twenty-First Century features songs from Broadway musicals that debuted in the past 20 years. Featuring some of the area’s most popular musical theater performers.

Join Robbie Wayne and friends for this one-of-a-kind musical tribute dedicated to the amazing career and often surprising life of the late George Michael. From his humble beginnings in North London of the early 60’s to becoming one of the best selling musical artists of all time.

The Improvables of the Desert

A hilarious evening of laughter, fun and improv comedy.

A benefit for the LGBT Center of the Desert.

In this delightful, laugh-a-minute comedy, four unique Southern women all needing to escape their day-to-day routines are drawn together by an impromptu happy hour. They decide it’s high time to reclaim their enthusiasm for life. Over the course of six months, fueled by laughter, hilarious misadventures and the occasional liquid refreshment, these women successfully bond and find the confidence to jump-start their own new lives.

SQUEEZE MY CANS  by Cathy Schenkelberg

Cathy Schenkelberg’s explosive one-woman show is more than just an audition to be Tom Cruise’s girlfriend. It is a trip down a volcanic rabbit hole. The Church of Scientology had the actress Cathy Schenkelberg for 14 years of her young, adult life. Schenkelberg shares a glimpse behind the velvet curtain of this strangely hilarious and unbelievably horrifying story of loss, isolation, manipulation and the relentless power of survival through persistance and humor.

Green Room’s tenth season continues with a lineup of Pulitzer Prize-winning Broadway dramas featuring many of the desert’s finest adult actors and directors. The regular season begins in October with recent Pulitzer Prize winner Sweat, by Lynn Nottage, followed in November by Paula Vogel’s How I Learned to Drive and then August Wilson’s Fences during February for Black History Month.

Peter Pan tells the classic J.M. Barrie tale of a young boy who refuses to grow up. Peter Pan is a story that is filled with magic, delight, and just a fairy dusting of heartbreak.

“Sexy Widows” centers on two widows and two widowers who bond through a musical journey of recovery. Comedy, drama and song bring hope while providing lots of laughs.

Get your jetpacks and exploding pens ready as the Baker’s Dozen salutes the world of espionage and covert shenanigans. Be sure there will be plenty of riffs off of James Bond, Jason Bourne and Austin Powers, to name just a few famous spies.

A deviously delicious Broadway and Hollywood sci-fi smash musical, Little Shop Of Horrors has devoured the hearts of theatre goers for over 30 years. The meek floral assistant Seymour Krelborn stumbles across a new breed of plant he names “Audrey II” – after his coworker crush. This foul-mouthed, R&B-singing carnivore promises unending fame and fortune to the down and out Krelborn as long as he keeps feeding it, BLOOD.

See You at the Theatre!