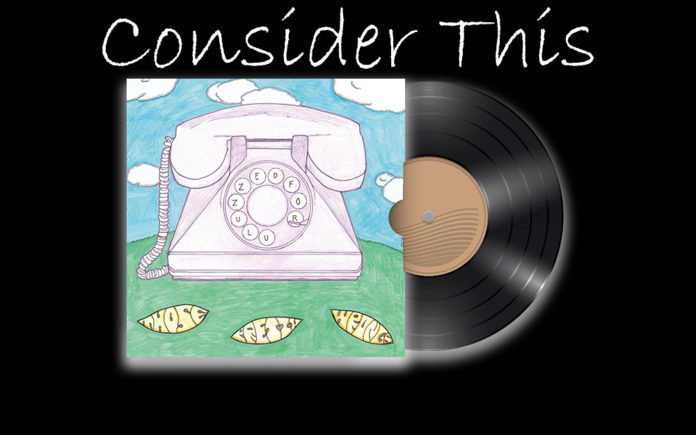 Those Pretty Wrongs take their intriguing name from a Shakespeare sonnet. The duo are comprised of singer-songwriter, former Freewheelers front-man, producer, and all-around wunderkind Luther Russell and Jody Stephens, who gained fame as the drummer for Big Star, and later in the alt.country super group, Golden Smog. The latter, featured members of the Jayhawks, Soul Asylum and the Replacements, adopting Wilbury-esque pseudonyms. Jody has also spent decades behind the scenes as an integral part of Ardent Recording Studio in Memphis.

For a certain segment of the population, Big Star is just as important as the Beatles, Bowie, or the Stones. Sadly, the Memphis four-piece, which also included Alex Chilton and Chris Bell on vocals and guitars, along with bassist Andy Hummel, was never properly appreciated in their own time. Between 1972 and 1978, they released three nearly perfect albums, #1 Record, Radio City and Third/Sister Lovers respectively, before calling it quits. Chris, who was the member most affected by their commercial failure, was working on his first solo when he was killed in a car crash. (It was posthumously released in 1992).

A funny thing began happening in the ‘80s. At that point, Big Star was a group worshipped primarily by record store clerks and music critics. Although their albums were hard to come by, their music became a rite of passage for a discerning few. Shrouded in mythos, scraps of information about the band were passed around, along with taped copies of their records. Almost incomprehensibly, here was a brilliant American band, equal parts sunny and somber, erudite and accessible, that the music industry managed to throw away.

Almost through osmosis, a Big Star renaissance was in the works. It began in 1986, when the Bangles covered “September Gurls” on their multi-platinum album, A Different Light. A year later the Replacements proudly declared their musical man-crush with their exuberant “Alex Chilton” song. Meanwhile,    R.E.M. recorded their sixth long-player, Green, using the same mellotron Big Star employed on their third album.

In 1992, Alex and Jody agreed to a one-off concert as Big Star, augmented by Jon Auer and Ken Stringfellow from the Seattle Power Pop/Punk combo, The Posies. (Andy Hummel declined to participate). By the end of the 20th century, they received their biggest exposure when Cheap Trick recorded a version of their “In The Street” song as the theme for “That ‘70s Show.”

Although Alex and Jody, along with Jon and Ken toured sporadically as Big Star and even recorded the 2005 album, Big Space, Jody maintained a 9 to 5 gig at Ardent, the hometown studio where they got their start, rising in the ranks to CEO. Unfortunately, on the eve of a showcase at SXSW in 2010, Alex suffered a fatal heart attack. A few months later Andy lost his battle with cancer. Jody is now the sole surviving member. All these facts are presented in more poignant and elegant terms in the 2012 documentary, “Big Star: Nothing Can Hurt Me.”

Luther came from a wildly successful musical family and grew up on the California Coast between Carmel and Big Sur. He jump-started his own musical career by relocating to L.A. in his late teens. Since the late ‘80s, he has successfully toggled between playing in bands like the Bootheels (which included Jakob Dylan), the Freewheelers and Federale, as well as nurturing a rich solo career and working as an in-demand producer.

Jody and Luther met in the early ‘90s, but didn’t begin playing together until a few years ago. The pair first collaborated when Jody was asked to perform a few Big Star songs at select screenings of the Big Star documentary. He asked Luther to join him on guitar. Subsequently, they began writing their own songs. Not long after, they retreated to Ardent Studios to record. They even managed to incorporate the late Chris Bell’s guitars on several tracks.

Signed to Burger Records, Those Pretty Wrongs released a 7” single in 2015 and followed up a year later with their self-titled debut. They treated it as a one-off, with Jody returning to his duties at Ardent. Luther found time to co-produce Weezer’s 2016 album, work with Robyn Hitchcock, concentrate on curating Selective Memories, a career overview, along with writing and recording his sixth solo effort, Medium Cool, which arrived this year to rapturous reviews.

Somehow, the pair managed to find time to sketch out a few songs and ended up with a complete 10 track album, mysteriously entitled Zed For Zulu. The record opens with the summery shimmer of “Tonight, Tonight, Tonight.” Plangent acoustic riffs lattice over a fluttery string section that is by turns blithe and bittersweet. Jody’s wistful tenor is clouded with regret and shaded by Luther’s symbiotic harmonies. As the first verse reaches out to a damaged soul; “You’ve been beaten down, down again, and you’ve been lost without a friend…” the final verse offers a bit of emotional rescue; “Close your eyes for a moment, you know you’re not alone, remember I miss you, so call me on the phone.”

Several songs here offer something on an aural banquet. The Folk-flavored “Time To Fly” is initially powered by iridescent acoustic guitars and Jody’s warm vocals. Luther chimes in and by the bridge the arrangement is fleshed out by a clip-clop gait, mournful electric guitar and ticklish toy piano. Lyrics, which are spartan and spiritual (without becoming preachy or didactic), simply urge us to “Put our faith in how we feel.”

The snap, crackle and pop! Of “You And Me” is achieved when honeyed acoustic licks ebb and flow over the first verse. Rather quickly, a propulsive rhythm kicks in and electric guitars trace over acoustic notes. A simple declaration of love, the lyrics are sweet, but never syrupy; “When nighttime falls as soft as a feather, when daylight breaks we’ll put it back together/When hope is lost and nothing is gained, you wonder why but can’t explain, I’ll be there with you.” The bridge is irresistibly Beatlesque, adding the not-so-oblique “Revolver” reference; “mad about you and your bird can sing.”

The gauzy grace of “Day In The Park” matches spiraling acoustic arpeggios with lush harmonies; accelerating slightly, a dropped beat and feathery electric guitar wash over, the hi-hats tinkling with anticipation. Something of a cosmic exhale, lyrics wax rhapsodic as a “sun spills into hues of yellows, reds and blues.” There’s a pastoral quality here that recalls the classic Simon & Garfunkel track, “Punky’s Dilemma” and “SMiLE” era Beach Boys.

The action slows for “Life Below Zero,” a hopeful meditation on grief presented in ¾ time. Strummy acoustic guitar intertwines with high lonesome electric riffs as subtle keys wash over the melody. The song is suffused in sorrow, but the lyrics reveal a glimmer of hope; “Heartbreak or happy, I never got to choose, all set for lonely with nothing left to lose…then there was you, then there was you.”

The sounds of the ‘60s are alive and well on a couple of tracks, “Ain’t Nobody But Me” and “The Carousel.” The former is anchored by jingle-jangle Byrdsy 12-string guitar, angular bass, flowery keys and a rock-steady beat. Concealed inside this sunny melody are lyrics whose compassion and empathy shine through; “When I was just the age of teens, I had no voice and I had no means/Doors were closed with broken keys, I’d call you up, ain’t nobody but me.”

The latter is hushed and brilliantly Baroque. It opens with fleet acoustic filigrees, as electric guitars ring and phase over obsidian keys and a tick-tock beat. Lyrics manage the neat trick of looking back with regret, yet looking forward with pragmatism; “As I glance behind, I see footprints in the path that I have made everyday/Fickle hopes and false steps, some will last and some will fade away.” For the Rolling Stones, it was just a shout away. For Those Pretty Wrongs, once you step on life’s endless carousel, it’s all just a dream away.

The album closes with the aforementioned “It’s About Love.” Quicksilver acoustic riffs cascade over an effervescent melody. Salted in the mix are wily bass lines, serpentine guitar, spectral keys and a pounding rhythm. The lyrics provide a conscious counterpoint to these fractious times, discreetly taking aim at the cowardly despot-in-chief, a carnival huckster who has managed to dumb-down the national conversation.

Much as the Youngbloods wanted us to “Get Together” more than half a century ago, Those Pretty Wrongs remind us “It’s not about walls to separate, or ways we can humiliate, it’s not about views that isolate or hopes and fears that suffocate/It’s not about blame or pointing fingers, not about shame or pettiness, it’s how we can find an easiness to forgive and get togetherness and make a pledge of love and happiness.” AMEN.

Recorded in Los Angeles and engineered at Ardent in Memphis, Jody and Luther played pretty much everything on the record. Notable exceptions are backing vocals from Danny De La Matyr, a clarinet solo from Jim Spake and a string section (wo)manned by Leah Peroutka, Aubrey Kessel and Leah Gibson. The string arrangement is courtesy Chris Stamey, infamous solo artist, ex-db and lifelong Big Star acolyte. The enigmatic Zed For Zulu was the result of an overly complicated transatlantic phone call.

While their debut felt mostly happy-go-lucky, Zed For Zulu is steeped in autumnal ache. Of course, Big Star goodness is baked right into the musical DNA, and Luther adds his perspicacious sense of songcraft. But mostly, he cedes the spotlight to Jody. The result is something of a musical panacea, guiding us through these dark days.