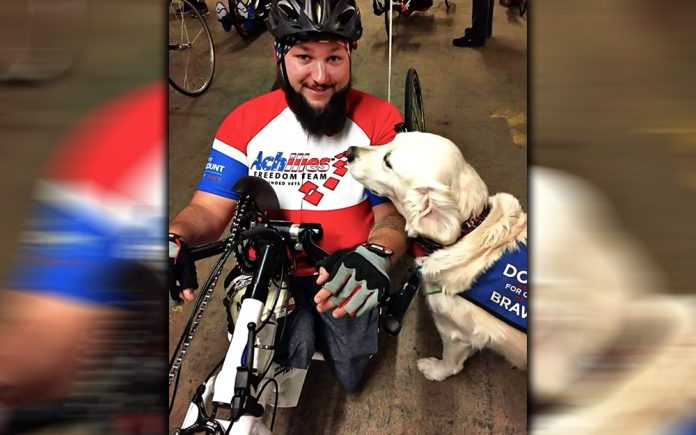 On the day before his 19th birthday in 2013, Clark Cavalier lost both his legs while serving in Afghanistan during the Gulf War. He spent the next 4 ½ years recovering at Walter Reed National  Military Medical Center.  His injuries were so extensive that he could not be fitted with prosthetic “artificial” legs.

His life was just starting, and now what would the future hold?  He could not perform the simplest of tasks. Venturing out into the public was an ordeal filled with obstacles, both physical and psychological barriers.

Andy Gladstein, Rancho Mirage resident, heard Clark’s story and believed his organization, Dogs For Our Brave (DFOB), could help. In 2018, Andy met Clark at Walter Reed accompanied by Josie, one of DFOB’s trained service dogs.  The lovely white colored Golden Retriever quickly bonded with Clark, and a match was made!

Josie became an extension of the disabled Marine, not only providing assistance with physical tasks, but helping to heal the despair and depression.  Josie provides hope, mobility, and freedom to live and operate within new physical parameters.  She retrieves items for Clark who is wheelchair bound.  She travels with him, and during trips outside the home Josie is always by his side anticipating and responding to his needs.  He is no longer alone.

Josie is there during the nights when Clark’s internal demons creep in.  She’s his other half who snuggles close to him, waking him when the nightmares become too real.  The dogs are trained to help with psychological issues as well, as many combat Veterans suffer from PTSD, Post Traumatic Stress Disorder.

Clark describes his best friend, “Josie can tell when I’m getting aggravated.  She will just nudge me until I pet her and I calm down.  She’s really good about calming me down. Josie is trained to pick stuff up for me and carry things for me.  I call her my Christmas miracle.  She’s been amazing.  Josie has changed my life!”

Dogs provide miracles in the lives of many of us humans, comforting us when we are sick, sad, or lonely. They understand up to 1,000 words, and they can also detect the intent behind our words.  Their love and loyalty is unconditional.  Working breeds like Josie especially love performing assigned tasks for their people. Josie spent over 6 months in training with expert dog trainers, learning basic obedience in addition to specialty skills such as opening the refrigerator to get a bottle of water.

Andy Gladstein founded DFOB in 2013 after befriending a Navy Seal who trained the Seal teams.  The man was deployed to combat 28 times, and had many stories about the challenges faced by returning Veterans. One day during lunch, Andy told his new friend and his wife he wanted to get a unique and memorable gift for his wife Marilyn on their anniversary.  They suggested he purchase a dog from one of the organizations that provides service dogs for disabled Vets and present it in his wife’s name.  Andy recalls, “Wow, that was a unique gift idea, and I did it!” 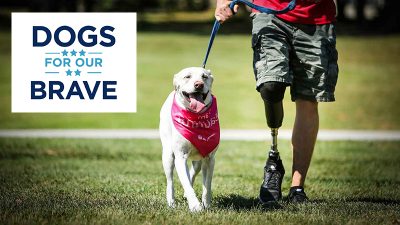 Andy did a lot of research and discovered it cost about $25,000 for up to 18 months of training and related costs to provide a fully trained service dog for a disabled Veteran.  He also discovered that once a dog was placed, the Veteran was on his own from there.  He knew that many Veterans struggle to provide for themselves and their families, and might be unable to provide costly veterinary care if their dog became sick or injured.  The idea of an organization that would provide follow up and cover costs for the life of the dog was hatched.

Andy Gladstein explains how his organization provides assistance, not only for a Veteran to obtain a service dog, but for all the costs of keeping that dog.  “No disabled Vet should have to choose between feeding his family and keeping his dog.  We take that burden away from them.  DFOB pays for all food, vet care, pharmaceuticals, supplies, and training needs that might arise.”  There is a continuum of free support for the life of the dog.  Their goal is to use rescue dogs whenever possible, thus saving two lives with every placement.

Check out their website www.DogsForOurBrave.com and consider making a tax deductible donation to this worthy charity.  Like DOGS FOR OUR BRAVE, INC. on Facebook for updates, amazing videos, and information about their Veterans and Dogs.

As we salute our heroes on Veterans Day, November 11th, we also salute an organization dedicated to making the world a better place for the bravest amongst us.  Freedom is what our Vets fought for, and Dogs For Our Brave and their miracle creating canines give it back to them.