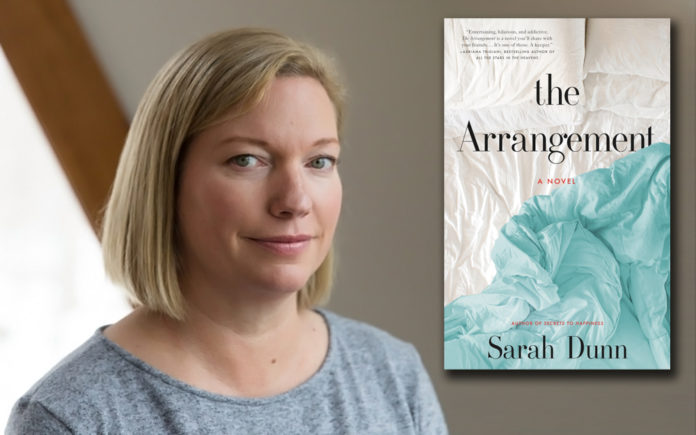 —–
The Arrangement
by Sarah Dunn
Fiction
—–

Are human beings monogamous creatures by nature or is monogamy a choice?  In Sarah Dunn’s The Arrangement (Little, Brown and Company, 368 pages) one couple tries to rekindle their relationship with extra-marital affairs.

Lucy and Owen, a middle-aged couple, live a quiet life in an unpretentious town in the Hudson Valley.   They left their dog-eat-dog jobs and high-priced Manhattan apartment in order to raise their autistic child, Wyatt, in the small community of Beekman.

Lucy is an active stay at home mom.

When some old friends visit from the city, and have a little too much to drink, the couple confesses to Lucy and Owen they have an open marriage.  They swear it has improved their relationship by brining back the romance they once had.

After a particularly difficult day with Wyatt, Lucy starts to consider her life and what she has become.  Her son often spits in her face and yells that he hates her when things get challenging for him.  Lucy is patient and calm as she deals with his disability and works hard to give him a normal life.

One night, Lucy and Owen discuss the idea of an open marriage and playfully draft rules.  Soon, they decide to give it a try for six months.  Just the thought of having sex with someone other than their spouse stimulates them both with a new level of excitement neither has felt in years.

Owen is the first to hook up with a local woman named Izzy.  In a short period of time, he finds that she has him doing chores and nags him worse than Lucy.

For Lucy, it takes a little more time to discover the right sex-partner.  But when she does, it goes splendidly and she finds herself falling in love with Ben, a divorced father of two.  She’s amazed at her sudden happiness and renewed joie de vivre.

Part of the “arrangement” is that Lucy and Owen cannot share their experience with one another.  It must be kept secret.  So halfway into the sexual adventure, Owen believes that Lucy is not having an affair—at least not yet.

Owen’s sex partner turns out to be somewhat needy and super crazy.  This causes a problem for the married couple at home.  Lucy confronts Izzy so she’ll back off, which only makes Owen’s sex-partner more insane.

Owen wants to stop the experiment early, but Lucy does not.   Now, Owen realizes Lucy is having sex and is shocked when she declines to stop the arrangement.  The couple is forced to confront the situation and find a new normal in their marriage.

Author Dunn does a wonderful job with dialogue.  She is witty, smart and her characters speak like real people.  She certainly has a handle on the complicated nature of marriage and the challenges women face as childcare providers.

Dunn begins every chapter with a quote from celebrity drag queen Constance Waverly which all pertain to the strain of marriage and life with one sex partner.  In some ways this makes the book feel like it’s an argument and an example for successful open marriages.   However, for Lucy and Owen, this is not the case.

Beyond the quality writing, I found myself turning the pages to see what disaster – or miracle – would befall this sympathetic couple.   Could this really work?

There are several other couples in this book whose marriages are coming apart or are unhappily staying together.  I kept waiting for these new folks and their complicated lives to intersect with Lucy and Owen, perhaps shedding light on their own situation.  But it never happens.

Thematically, under the complications and emotionality of this story, there is a message about gender roles.

The local kindergarten teacher is transitioning, and one day, without notice, comes to school as a woman.  He tells his little students to address him as Mrs. Lowell, not Mr. Lowell.  Mrs. Lowell’s spouse decides to stay married to her, which baffles some of those in the community.

Part of the angst that Dunn captures regarding marriage and monogamy is the loss of self, sexual joy and personal freedom.

The couples are so caught up keeping their households running and families successfully functioning, that they have disregarded their personal desires and are just playing a part in their marriages – husband, father, provider, etc.

This book exposes just how unjust it is that gender roles are not equal.  Women are still the ones giving up careers to raise children and doing the lion’s share of work, while husbands must be nagged to do simple chores around the house.   When a man has an affair, he is not labeled a “home wrecker” or “slut.”

Relationships require work and attention, and it is much easier to love someone and see them as sexy when they are respected helpmates and not adversaries.

The Arrangement is more about redistribution of power and the antiquated institution of marriage than extra-marital affairs.