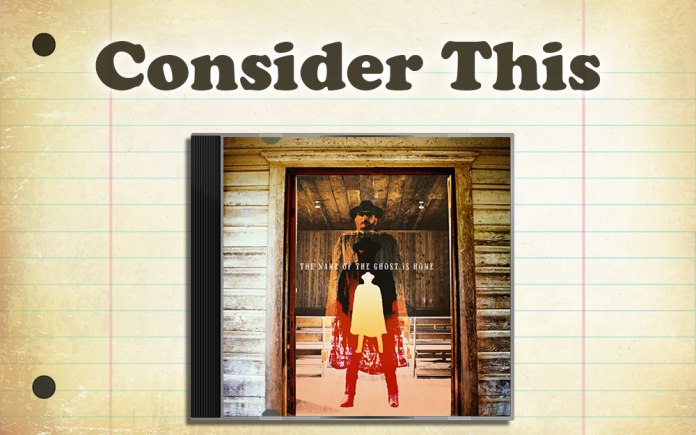 “If I could crawl out of my skin, and shed the

one I slither in you know I would, the world gets

flatter every day, what good would it matter if I

That’s Drunken Prayer, performing a mental health check on the new record, The Name Of The Ghost Is Home. If it were possible for Tom Waits, The Band and Syd Barrett to sire a musical love child, it might sound a lot like Drunken Prayer.

Drunken Prayer is the nom de Rock of musician Morgan Geer. Born in San Francisco, he spent a nomadic childhood traveling the country with his Folk-singer mom. More recently, he’s split his time between North Carolina and Oregon. He made his bones playing lead guitar for alt-country Goths, Freakwater, as well as ‘Fro’d-out Soul-Rocker Bettie Smith. He’s also shared the stage and performed with The Handsome Family. Crisscrossing America and traversing the globe, he’s played over a thousand shows in 18 countries, even hitting notable festivals like Newport Folk Festival and Pickathon. His music has landed everywhere from NPR, KCRW and Little Steven’s Underground Garage on Sirius XM. The Name Of The Ghost…. is his sixth Drunken Prayer long-player.

The record opens on a twangy note with “Sweetheart Of The Picket Line.” A loping charmer, powered by thrumming bass lines, ascendent acoustic chords that wrap around fleet electric riffs, as Morgan’s woodsmoke rasp echoes the Arkansas grit of the late Levon Helm. Arcane lyrics unspool a Shakespearean saga of love across the protest lines; “Behind the line of power, who’s the hero and who’s the coward, let them have them streets they’re determined to die on, my one true love was sent by fate, testing the mettle of a police state, if you only had the weapons and the will, if you only had the weapons and the will.” And you thought Romeo and Juliet got a raw deal…

Musically, Drunken Prayer hopscotches through a plethora of styles and consistently sticks the landing. Take the back-porch ramble of “Mynah Birds.” Sun-dappled acoustic notes partner siren-esque pedal steel, fluttery electric guitar, darting bass lines and a clacking backbeat. Lyrics find Morgan equating his own dazed confusion with the prattling fowl; “Nests in a gale, a lullaby in a minor scale, whistling past the graveyard and singing in the rain, fake it till you make it is the Mynah Bird’s refrain.” A skronky electric guitar threads through the break before fading into the ether.

Meanwhile, “Sunderland” is a tender lament that seems to speak directly to a generation that went to war and returned home with wounds that won’t heal. Shivery pedal steel lattices atop keening guitars, shuddery bass, whirring synths and a barely there beat. The opening couplet says it all; “Where the flags forever fly at half-mast, never may they wave, heroes around here are falling off fast, they never die of old age.” Warm “oooh-oooh’s,” courtesy Christa de Mayo, shadow the break, which is awash in rippling electric six-string guitar, painterly pedal steel and whispery synths.

Then there’s the grizzled Psychedelia of “She’s A Heart.” Static-y guitar riffs are supplanted by a soporific wall of sound that’s fueled by a rattle-trap rhythm, sepulchral guitars, spidery bass lines and mercurial pedal steel. The industrial dust settles, and the first verse pares down to just Morgan’s plaintive vocals and strummy acoustic guitar as he spins a yarn concerning the “The Ace of Regrets” and “The Queen of the Blues.” On the break, the tension ratchets up, locking into a squally maelstrom of searing pedal steel and prickly guitars. The song’s melancholic aura is oddly reminiscent of Pink Floyd’s slippery Syd Barrett elegy, “Wish You Were Here.”

The album’s best tracks are, to quote Donny and Marie, a little bit Country and a little bit Rock & Roll. Morgan’s sly sense of humor is on full display on “Country Ball Of Flame.” A sideways homage to the glitter and grit of Nashville. Twangy guitars brush up against, lurching bass lines, cascading pedal steel notes and a tick-tock beat. Not-so-subtle references to Loretta Lynn and the late, great Johnny Paycheck adds to the Grand Ol’ Opry verisimilitude, as lyrics make the case for his induction into a less august institution; “I belong in the Country Music Ball Of Flame, flyin’ high in my little ol’ sky with all them Hanks…I never had a number one record, but I polished up a couple number twos.” Gutbucket guitar licks act as a wordless Greek chorus, underscoring every sharply turned phrase.

Morgan and Christa de Mayo offer a 21st century take on the George & Tammy paradigm on “I Wouldn’t Change A Thing.” The meandering melody is anchored by bramble-thick guitars, brisk bass lines. feathery piano arpeggios and a loose-limbed beat. Framed as a disgruntled conversation, grievances are aired; “Let’s talk about D.U.I.s, some pigs weren’t meant to fly, the emergency room is no place to lose your keys/Oh Morgan, don’t you be so mad, them stitches is a hell of a badge, I don’t believe you wouldn’t change a thing,” but the status quo remains unchanged.

The majestic “Landlines And Rabbit Ears (Nachos For One)” is an exercise in cranky nostalgia, mythologizing everything that came before. Stately piano notes are bookended by stinging guitars, wheezy synths, wily bass and a sleepy, shuffle-rhythm. Lyrics simultaneously pine for the past; “Landlines and rabbit ears and nachos for one,” humble-brag; “I’ve wrecked hundreds of cars, fell from tall buildings, drug by six white horses and broke 56 bones, suffered and shamed by the blowing winds of change, I will not throw you a high-five,” and pay obeisance to the collective obsolescence. Still, STILL, it’s better than newfangled conveniences, plus, the new generation is useless. Blustery guitars mirror the indignation of the final garrulous salvo; “No, the kids, they cannot rock, the kids can’t roll, no the kids they cannot rock to save their goddamn souls, the beer and blood is mixed in with mud, the kids can’t rock and roll.”

Finally, “Oasis In The Yard” is equal parts surrealistic and shambolic. Fuzz-crusted electric guitars, spartan acoustic notes, flinty bass lines, burnished piano, rococo harpsichord and greasy clavinet are tethered to an akimbo beat. Solipsistic lyrics flicker between ambition and ennui, noting “I want for nothing and it’s already here.” A scorchy guitar solo sidles across the break, accented by some rollicking Honky-Tonk piano. Before the final chorus rolls around, Morgan offers up some trenchant jabberwocky; “The royal me, I don’t want no deathbed epiphany, bring me the horizon from behind the Taco Bell, I wanna know if this is heaven or hell.” (The subtle, but sincere homage to Britpop bad boys, Oasis is duly noted).

Other interesting tracks include the aforementioned “Crazy Alone,” which battles feelings of loneliness and isolation. “God Of The Sea” is a woozy waltz wherein a waterlogged deity proclaims “Winters will spring and summers will fall, children will run off to school, I will remain while the world goes on changing, I get to make up the rules.” Then there’s “The Judas Table,” a Dylanesque hoot featuring swoony fiddles, liquid acoustic arpeggios and an insistent kick-drum beat. Morgan’s tongue is firmly in cheek when he notes “It’s a hotter lake of fire than the one I envisioned, let’s raise a little hell before they throw us all in prison, come on into my kitchen, I won’t tell where you’ve been, it takes more than money to pay the rent.”

The album closes with the aural chiaroscuro of the title track. Dusty, Morricone-fied guitars ride roughshod atop tremulous bass, graceful piano notes and a tumbling beat. Lyrics unfurl as more of a mantra, revealing little. It’s a hypnotic end to a great record.

There’s a ramshackle charm to this record that expands with repeated spins. The Name Of The Ghost Is Home is Drunken Prayer’s most assured effort to date.