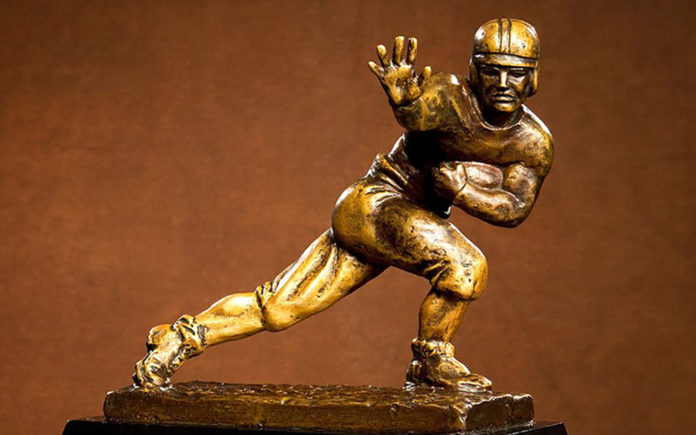 The college football season starts in September, but it’s never too early to preview the Heisman Trophy race. Here’s a look at some names to watch for the 2018 Heisman, given annually to the most outstanding player in college football. It’s early enough in the betting season to grab some clear value on some of these sure to be outstanding players.

Love finished second in last season’s Heisman voting after rushing for 2,118 yards and 19 touchdowns. He averaged 8 yards per carry – fourth-best in the FBS – and rushed for 100 yards in 13 of 14 games. He was coming off an ankle injury in the one game he didn’t.

Taylor was a key cog in the Badgers’ offense, rushing for an FBS freshman-record 1,977 yards and scoring 13 touchdowns. He had three games with more than 200 rushing yards and 10 with more than 100 yards.

We’ve seen dual threats such as Lamar Jackson, Cam Newton and Johnny Manziel run away with the Heisman in the past. Tate could be that guy this season. The junior had nearly as many rushing yards (1,411) as he did passing (1,591), including a 327-yard, four-touchdown outburst against Colorado. He’ll need to improve as a passer (14 touchdowns, nine interceptions), but his highlight-reel plays could keep him in contention.

Fromm took over as the Bulldogs’ starting quarterback in Week 1 after an injury to Jacob Eason, and 2,615 yards and 24 touchdowns later, he’s the top returning offensive player on a Georgia team that eyes a return to the national title game.

After transferring from Texas A&M and sitting behind Heisman winner Baker Mayfield, Murray steps in on an Oklahoma team that was just a few plays away from making the national title game. Murray is more athletic than Mayfield. He reportedly was clocked at a 4.38 in the 40-yard dash and was the ninth overall pick in June’s MLB draft by the Oakland A’s.

Dobbins replaced an injured Mike Weber in Week 1 and immediately made his presence felt with 181 rushing yards and two touchdowns. He finished with 1,403 yards – the most ever by an Ohio State freshman – and seven scores while averaging 7.2 yards per carry (seventh-best in the FBS).

Bryant (pictured) was solid last season as Deshaun Watson’s replacement, throwing for 2,802 yards and rushing for 665 for the 12-2 Tigers. But there usually is one freshman every year who bursts onto the scene, and Lawrence — a highly touted recruit — could push for the starting job right away. Whoever lands the job finds himself in an ideal situation with a team that likely will be in the mix for a playoff spot.

Patterson was granted immediate eligibility after transferring from Ole Miss, so he’ll get a chance to work with Jim Harbaugh right away. Patterson threw for 300 or more yards in five of seven games for the Rebels before tearing his PCL in late October.

The Winner You Ask?

I don’t typically like to bet the favorite when it comes to future odds, but I just feel that Tagovailoa has an excellent shot at bringing home the hardware. I believe Tagovailoa is the most gifted quarterback that head coach Nick Saban has had in what will be his 12th season with the program.

What he did in the 2nd half (166 yards, 3 TDs) against Georgia in the National Championship Game was unbelievable. Not only will he put up great numbers, but he’s playing on a legit national title contender.

If you don’t mind making a wager 4+ months in advance, futures can sometimes offer huge value. Like Alabama to win it all but don’t like laying the favorite price of -150? Take a shot at Tua. If Alabama is there, that surely means Tua has been putting up numbers that will surely put his name in the middle of the race. Or look further down the board a little. Some books have Penn State penciled in as a playoff team. If that’s true, that makes Trace McSorley at +1500 an extremely interesting (and profitable) Heisman Hopeful! G’Luck!