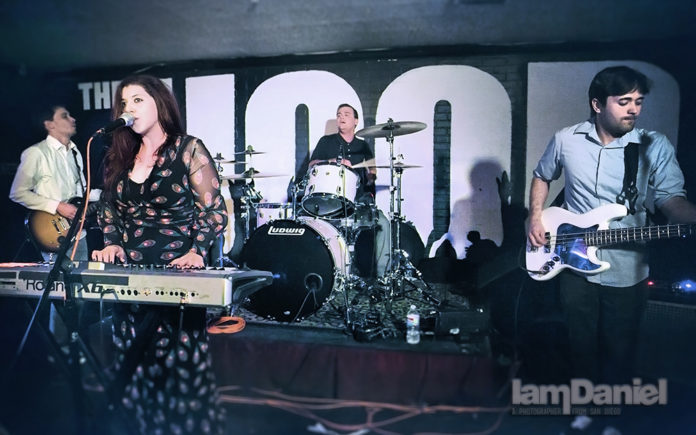 Caxton’s new album, The Devil I Know, will be released on vinyl and digital platforms everywhere Saturday, March 30, 2019. To celebrate the release, Christina Reyes, vocals and keyboards, Adam Surdin, guitar, Brett McLaughlin, bass, and Brian Pelletier, drums, will be performing live at the Date Shed in Indio, California on Saturday March 30, 2019. Opening the show are special guests Long Duk Dong, The Dirty X’s and Blasting Echo.

You can purchase tickets online at eventbrite.com and at the Date Shed Box Office on:

Coachella Valley Weekly spoke with Reyes and Surdin as they prepare for their much anticipated “reunion” show.

CVW: How is Caxton doing since your time away from “the scene”?

Reyes: “We definitely have been off the radar for a bit! We’ve really missed playing. Relocations and family expansions kept us from being able to get together for many shows but we used the time away from the scene to produce a piece of work that we are extremely proud of and excited to share. Speaking of family expansions, Brett and his wife Kristen are expecting their first child this May; we’re super excited for them!”

CVW: What’s it been like for you and your boyfriend, Jake Fimbres (The Dirty X’s), since you moved to the Northwest? Dare I ask if you have missed the desert?

Reyes: “We just finished our first year in Portland and I think we’ve got the hang of things now, it was definitely an adjustment! The desert runs through Jake’s veins, he’s happy anywhere but he is meant for the dirt. Personally, I prefer the rain and cold to the heat so I’m digging it here for the time being. We both do really miss the desert and everyone in it though so we’re glad to know we’ll be back in California soon!”

CVW: What’s the music community like in Portland and have you performed anywhere out there?

Reyes: “With school being so time-consuming and the guys having young kids, we haven’t had a chance to bring Caxton to Portland, OR; but Jake and I have seen a bunch of our favorite artists play here over the last year and can say that this city has one of the greatest collection of venues for music! I’d love to hit some of these places on our next tour.”

CVW: I know you are pursuing a career in Speech Pathology. Where are you in the process and when the hell are you coming back??!!

Reyes: “Soon, I swear! Jake and I are always conscious of when we’re moving back. I’m doing really well in my program and am doubling up on classes next term to graduate even faster; I’m back in class two days after our record release show! Right now, it’s looking like Spring/Summer 2020. We can’t wait to be close to everyone again.

CVW: Was it laborious for you and the band being separated from each other in the midst of completing The Devil I Know? What has been the biggest challenge and blessing?

Reyes: “The distance between all of us definitely contributed to the duration of the process and was by far the biggest challenge in finishing The Devil I Know. Our studio is currently located in Oakland, CA so retakes and little edits aren’t the simple drive downtown like they were for Plotting A Murder. We took road trips together and flew separately to get the job done. It was a lot of hard work but that was probably the biggest blessing as well. Not having the ability to make a record quickly also kept us from releasing an unfinished product. So while it was laborious, it was a labor of love. They say good things come to those who wait so we’ll see!”

CVW: Locally, Brett has been the most visible with his “other” awesome rock and roll band Reborn by the Sunshine. What have Adam and Brian been up to?

Reyes: “Brian has been spending time with his girls and has been teaching them to play drums. He sends us videos in our group text all the time; it’s pretty cute to see how much they love it. When Adam wasn’t mixing the record, he was brushing up on his production skills. He records different artists playing live in studio for a popular podcast and rumor has it he’s even playing a little bass and drums around town.”

CVW: Caxton is one of the best bands to come out of the Coachella Valley in the last ten years. What is your vision for the next ten years?

Reyes: “It’s still hard for us to digest that it has actually been that long. We feel like we’ve come so far from where we started… it has really been a journey. Sometimes we see old photos of us on tour and we look like babies! Reflecting on all the amazing experiences and opportunities we’ve had makes us more grateful than anything. Our vision for the next ten years is to stay close, keep writing/recording, play whenever possible, and work on getting our tunes used commercially in television and film.”

CVW: The Devil I Know will be released 3/30/19. You’re also releasing it on vinyl. What are you anticipating most?

Reyes: “There are certainly some nerves that come with releasing our first full-length album in 8 years. Are people going to like it? Are they going to care? But after all that wears off, it’s just pure excitement. Like everyone, we were crushed when the 2017 CV Music Awards was halted due to the power issues. It was the first time in a long time that we were going to be playing as a full band and we were debuting a song we had just written. Sadly, we weren’t able to make it back for the redo of the event so when we play What We’re Made Of (Old News) at the Date Shed, there will be a sense of fulfillment there for sure.”

CVW: How much of The Devil I Know was written before you left the Coachella Valley?

Surdin: “Well, we have “Maybe Next Time” and “Uproar” on this album. Both songs were written long before Christina left but were never recorded; just songs we played live, so it was fun to give those a new voice. There is also a track called “Same Air” that we had been sitting on for years but it never worked until now. The remaining tracks were all written before she moved as well, it was the recording process that was more disjointed. We had all the instruments recorded before Christina moved but she had to fly down to record the vocals. We only had 48 hours to get every single vocal lead, harmony, and double, recorded for the entire album. It made for a whirlwind couple of days but she killed it!”

CVW: How different is The Devil I Know from your 2011 Plotting A Murder release in your approach, sound and writing/recording process? 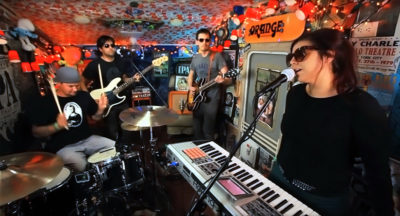 Surdin: “In addition to Plotting A Murder in 2011, we also released a 4-track EP in 2014. So, in the time where we were off the grid, we put out a compilation that had a mix of them both. For The Devil I Know, we wanted to experiment more and use analog gear as much as possible. Where our previous recordings were mixed primarily in the computer, this time we used an analog/digital hybrid setup by tracking and summing mixes on a 24-track Midas console, used Universal Audio 4110 mic preamps, experimented with different ribbon and tube mics and a slew of analog compressors and EQs. We didn’t want to come back after a few years and sound like a completely different band but at the same time, we knew our style would naturally evolve. Of course we had to break out the analog tape delay used on Plotting A Murder, but we looked for new creative ways to utilize it from layering vocals to making the snare sound like it’s breaking down. Our approach is always to write songs that are inclusive and inviting without sacrificing intellect. The recording process was different as we mentioned, but the feelings behind this release are different too. In 2011, we had our Plotting A Murder record release at Date Shed and played with The Ataris. Even though it wasn’t our first album, it was our first real album and we were stoked to be coming into our own. That show almost felt like a coming out party, whereas this release feels more like a homecoming. It’s going to be a special feeling to see the same faces from back then still in the crowd supporting us now.”

CVW: Your record release show is 3/30/19 at the Date Shed. You have Blasting Echo, The Dirty X’s and Long Duk Dong on the bill. What are you looking forward to most?

Reyes: “First of all, we couldn’t ask for a better lineup! Each of these bands brings a fierce energy to their performances and we’re extremely lucky to have them with us for this show. For us, playing this show is like getting to reveal a secret. We’ve been holding on to these songs for so long now that we’re about to burst! The secrets are finally coming out and we can’t wait to hear what you think of them.”

CVW: Your single, The Devil I Know, sounds like the next step in the evolution of Caxton. It’s dark and has that familiar Caxton stroke and strum while having an air of maturity both lyrically and musically. How would you describe the album as a whole?

Surdin: “This album definitely has the essence of who we have always been with shades of new influence. Lyrically, it’s a collection of stories and happenings since we last spoke. Some are darker than others. We wanted to push ourselves to take risks we hadn’t before and it feels like we accomplished that. We hope to elicit a range of emotions from whoever is listening to the story, as there were a variety involved in telling it.”

CVW: Why was it important for you to release the album on vinyl as well? 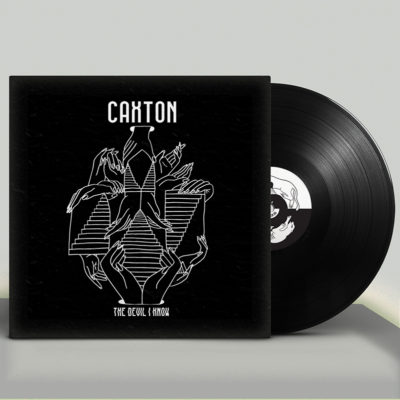 Surdin: “As this record was coming into existence, one thing was certain: we were putting it on vinyl. We grew up with our parents records and eventually created our own collections. Music just sounds better on vinyl…it feels better. It was a challenge we hadn’t tackled yet and we felt strongly that this was the time.”

CVW: Anything else you’d like to add for our readers?

Surdin: “In addition to the vinyl, every album purchase also includes a free digital download code! In fact, we encourage giving a listen-through with good headphones. We spent a great deal of time on the details for this record. There are moments of intentional panning and other effects that help develop the vibe. That being said… however you listen, thank you for listening! We’ll see you at the Date Shed!”

Read the Coachella Valley Weekly album review of The Devil I Know here: