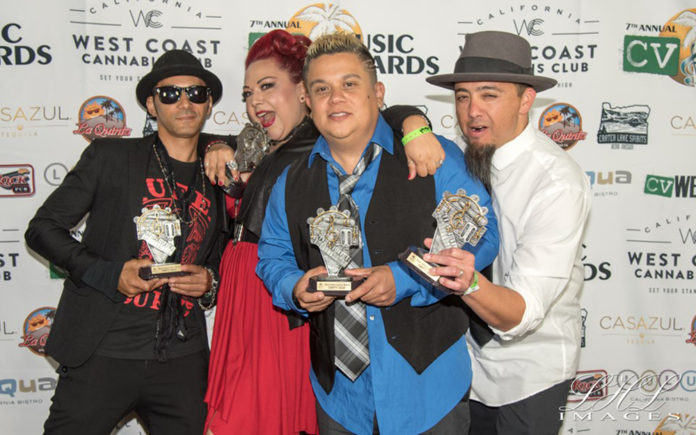 In my estimation, the darlings of the 2018-2019 year in music in the Coachella Valley have been the revamped and independent rock outfit Empty Seat. RED (vocals), Anthony Ferrer (guitars), ES Spade (bass) and Rickey Villalobos (drums) have restored their faith in the music and found a new home in the hottest music community on the planet.

Coachella Valley Weekly spoke with RED and Ferrer to discuss their return, rebirth and recognition.

CVW: How are you feeling after your CVMA wins for ‘Best Alternative Band’ and ‘Best Front Woman’ and what do they mean to you?

Red: “I’m feeling great! It’s taken about a week to come down from the high. I really did not see these awards coming at all! There is so much great talent out here. I was ready to clap for someone else. When they called my name for ‘Best Front Woman’, I really didn’t know what to say, I was in shock. I got emotional for sure. I have been singing and performing since I was 15, mostly by myself over tracks but when I turned 21 we started my first band, ES. We have worked so hard over the years and we have never won any awards like these. It was a proud moment for us to be acknowledged by the people; such a great feeling, a token of recognition that we will cherish always. I’m still shocked and excited!”

CVMA: There’s no stupid question, right? Could your first CVMA experience have gone any better?

Red: “No way! We haven’t experienced past awards shows but most people have agreed that this one was EPIC! Suzanne Somers surprisingly showed up and Paul Rodgers not only accepted the Icon Award but performed with our friends! I was in heaven! I would have to say this night was one of the best nights of my life. Tracy, Phil and the CV Weekly crew did a phenomenal job!”

CVW: Because of your long absence, you could have also received the ‘Comeback Award’. You’ve shared with us in the past about how you almost gave up on Empty Seat. How happy are you now that you didn’t?

Red: “I believe everything happens for a reason and things fall into place the way they are supposed to. In the past, ES has had some moments of greatness and it seemed like once we got to that point where we could have almost ‘made it’, someone would fall out of the band. We lost two bass players and tried to start over again. Finally, in 2008, our drummer quit and we were just tired of starting over again and again. We just left it at that and went on with our lives. Anthony and I participated in a side project with our producer Larry and current bass player. We released an album and that was short-lived as well because our bass player decided to leave again. We took a long break and it wasn’t until 2017 when Anthony had a big birthday party and we had an itch to perform so we called up the guys after eight years to see if they would do us a big favor and perform with us for the party and do one last ES set. The spark set in again and Rickey, our drummer, wanted to keep playing so we gave it another chance. Our bass player fell out, yet again, but it led us to having our first bassist back and so here we are giving it another round. We are putting a lot of effort in right now. Two of us live in La Quinta, one in Los Angeles and one in Hesperia so we must make special arrangements to rehearse and spend lots of money on gas. We are all willing and excited to see what happens next.”

CVW: What’s next for Empty Seat after a successful first year in the desert?

Ferrer: “You tell me? The doors are wide open. As for now, we’re definitely writing new music. It’s like we’re starting all over again, so we have to re-collect our merch, take new band photos and write new songs to come out with new material. ES has two previous albums with the last recorded in 2006 so it’s a huge deal to record this new music and we are looking for the right person who can help us make this one the greatest we have ever recorded.”

CVW: How is the new music coming and when will you start recording?

Ferrer: “The new music is coming along great. We have tons of material to work on and lots of ideas. Now it’s time to get it all ready to hit the studio soon.”

CVW: You’ve connected quickly with many long-time CV musicians in a short time. What artists do you admire from our area?

Ferrer: “I admire all of the artists out here. We love every style of music. I have noticed since being in this music scene about a year now that something magical is happening here. I have been around a while and just caught the tail end of the magic in L.A. and Hollywood back in the early 2000’s. The great clubs started closing down and music rotation on the radio lacked new talent and something weird was happening to the music. This year, moving out here and being a part of this desert music scene, I have seen so many bands and artists improve so quickly it’s like the creative fire is lit again. If we all keep creating and working hard this could be the next Laurel Canyon like back in the 70’s. People will be talking about us for years to come. This awards show sparked something up for sure. We all just need that little push. No haters, just all of us coming together to have a good time and appreciate each other’s talents. Let’s raise each other up. I’m very proud of everyone.”

CVW: The CVMAs were extraordinary this year. What was your favorite moment?

Ferrer: “Paul Rodgers of course! Oh, and winning ‘Best Alternative Band’ and ‘Best Female Front Woman’. All of it was great and we can’t wait for next year’s show!”

CVW: Not many bands get the opportunity to rise from the ashes such as ES.

Ferrer: “Our move to the desert was truly a calling. We stayed silent until the Big Rock Pub gig then we got locked into the CV Weekly Showcase. We thought this was a calling to put our hearts back on the stage and give it everything we got. I think that’s why we succeeded at the awards.”

CVW: I think a main reason why ES is a good fit in this community is your drive and determination to present the best product possible while maintaining the integrity of your art.

Ferrer: “ES is a true garage band to club to main stage story. I still believe music is a powerful expression of art and not a competition. It’s about sharing your art and seeing how far you can take it. We are searching for nothing new. We want to bring people to experience something they have not seen before and leave them feeling good about it.”

CVW: What are the next stepping stones for ES?

Ferrer: “ES is passion for rock music the hard way. There are no schooled, silver spoon fed musicians in this band. We are fortunate to have RED as our vocalist. She carries this band and has much more to say. I feel deep down inside the next ES album is gonna be our most memorable.”

You can find Empty Seat below: