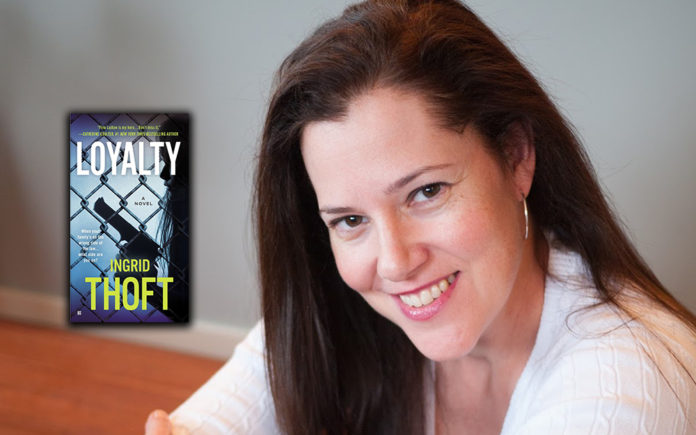 Family bonds can be the best part of our lives, or we can spend our whole life trying to overcome them.  Either way, family has a powerful influence on who we are, and what we become.  Loyalty by Ingrid Thoft (Putnam, 407 pages) finds one sibling challenged to find her independence and stand up for what is right.

The story follows Josephine, “Fina”, who is the youngest child and only girl of an attractive, well-known, and well-to-do family of formidable attorneys.  She has three older brothers and a commanding father who comprise an effective front of legal prowess.

Fina works for the family firm as a private investigator.  When her sister-in-law goes missing under suspicious circumstances, Fina is sent out by the family to find out what happened.  She is competent, capable and willing to do whatever it takes to get the facts even if it means committing a felony – especially since her legal representation is free.  Fina often looks the other way when it comes to the family’s work ethic and business practices.

Of course, the police are looking at the missing woman’s husband, Rand, who is Fina’s eldest and most arrogant sibling.  Rand’s father and brothers quickly come together to protect him.  But Fina is not at all convinced her brother is innocent of a crime.  She is willing to keep an open mind and find her sister-in-law even if it proves Rand is a killer.  And Fina is not afraid to say it to Rand’s face.

As Fina digs into the case, she confronts a myriad of characters that are not fond of her – including the police chief.  Fina is a badass chick who carries a gun and can kick some serious butt.  She is fearless, and also takes a considerable amount of beatings, as she gets closer to discovering the truth.

When all the players finally surface and the missing woman is found dead, the killer may not be her brother, but he is certainly not totally innocent of the crime.

I found Fina to be a believable and bold character.  She is flawed and the reader sees why.   She is not maternal and is not the marring type.  Fina does her best to be a loyal family member and yet tries to keep her distance from the dysfunctional elements, which is never easy.  I liked that she is sympathetic without being weak or victimized.

After Fina reveals the truth and the particulars of her investigation, she confronts her father, the powerful patriarch, with the evidence.  Her brother’s daughter has been abused and victimized by Rand.   And that’s where Fina draws the line with family loyalty.

Author Thoft sets the story in Boston and there is an authentic feeling for the place.   Its gritty and wealthier divides and collegiate locations play a role in the story.

I also enjoyed being an insider for the legal strategy to defend Rand.  It was fascinating to better understand what evidence was necessary or unimportant when it came to defending the accused.

“Loyalty” is Thoft’s first novel and the character of Fina has since been launched into a series.  The fourth installment was released last January.  I hope that Fina can continue to show off her physical strength and emotional intelligence in these subsequent books.  I would like to catch up with the entire family – good and bad.

In the story, Fina’s many boyfriends and the mentors in her life seem to know her and her family better than she herself.  There is a thematic element that resonated in the narrative that Fina often reminds herself: “The mysteries we solve are far fewer than those we don’t.”

Unfortunately, sometimes those unsolved mysteries are right under our own roof.