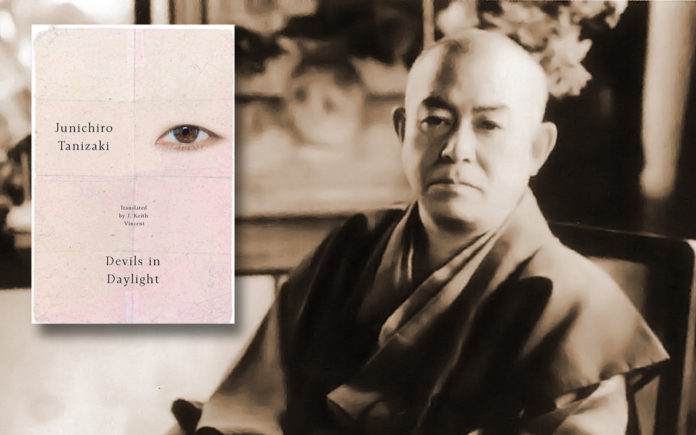 There are great works of literature all around the world. The challenge is to not only find these wonderful stories, but to get them translated.

Over the last several months, some of my favorite reads have been translated works (See CVW Book Review column Quick Sand, The Teeth of the Comb, A Man Called Ove.)

It’s my bad, irresponsible even, when I forget to credit the translator. I am certain it is a major challenge to do that job well. Not only is it necessary to have a total understanding of two languages, but also requires great writing skill, comprehension of word nuance, subtext, and multiculturalism.

Devils in Daylight by Junichiro Tanizaki (A New Directions Book, 95 pages), translated by J. Keith Vincent, is a new telling of the late literary genius’ novella.

Academic and scribe Vincent, digs in with a fresh translation of Tanizaki’s psychological thriller inspired by Edgar Allen Poe and Lady Murasaki.

The story is a first person tale about a writer, Takahashi, whose wealthy, mentally unstable, friend, Sonomura, calls late at night asking his pal to please come witness a murder with him!

Takahashi believes his friend is suffering from some kind of psychotic break, but agrees to go, hoping to put a stop to the madness once they are together.

But, just the opposite happens.

Sonomura tells him how he saw a beautiful women and a young man secreting a note plotting the murder of an older man. After they drop the note, Sonomura picked it up and discovered it was written in code, which he was able to decipher.

Takahashi, still believing he might be able to help his friend regain his faculties, agrees to search out the clues that lead to the murder site.

The two find the location, and much to their shock, witness the murder and the disposal of the body.

However, there is no evidence of a crime and they are stuck living with the horror of what they have seen.

The two speculate about the woman and her young male friend; are they lovers, master and servant, boss and employee? They assume it is not the first time the two have killed and wonder about recent wealthy industrialists who have gone missing.

Sonomura is so taken by the beauty and sophistication of the murderess; he tells his friend that he plans to find the women and become her lover.

Takahashi refuses to be a part of his plan and warns his friend about the potential danger. Sonomura promises he will never share that Takahashi’s was a witness.

After some time, Takahashi receives a letter from his friend that states he has fallen prey to the mysterious woman and the young man.

Somomura once again asks Takahashi to come witness his murder. Sonomura begs Takahashi not to call the police or inform anyone because it is his last wish to be killed by the beautiful, mysterious woman he loves.

Out of respect for his friend, and curiosity, Takahashi goes to witness his friend take his last breath at the hands of the woman.

Takahashi, thinking it’s all behind him, receives a letter from the woman and the young man inviting him to come collect an inheritance Sonomura has left for him.

This is a suspenseful psychological thriller. The two friends argue and debate their circumstances. Sonomura is bored with life. He is alone with no family. He wants to feel alive and challenged. Takahashi cannot deny his arguments, but things are not always as they seem.

Translator Vince is a professor of Japanese and comparative literature at Boston University and has been acknowledged for his translation of Japanese literature.

In the “Afterword,” Vince shares how he came to title the translation of Tanizaki’s work, Devils in Daylight, and the connection the author had to the work of Poe who was very popular in Japan. Vince points to the similar literary style and the use of the code from Poe’s “The Gold Bug.”

With that information, I reread the Poe story, and, yes the homage is present and delightful!

Tanizaki was born in 1886 and died in 1965. He was a popular Japanese novelist, writing about eroticism, obsession and destructive behavior.

Vince also writes about Tanizaki’s film career and how fiction was frowned upon by Buddhists because it’s not real. All very fascinating. I get the impression Vince could have said much, much more on the subject.

Regardless of the scholarship and literary connections, Devil in Daylight is a captivating and thrilling novella. Kudos to Vince for translating a great story and capturing the spirit of Tanizaki’s original work.