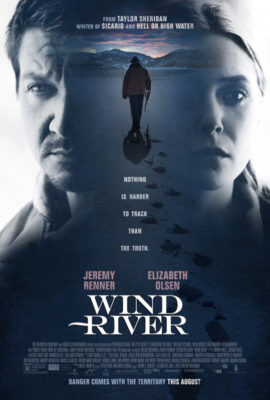 Cory, Renner’s character, is a tracker whose job is to dispatch wolves and mountain lions that kill livestock on the reservation. One day, while doing his job, he finds the body of an 18-year-old native girl dead and frozen on an isolated snowfield.

The FBI sends Jane (Olsen), a rookie agent from Las Vegas, to the scene. She quickly realizes she’s way out of her depth in this community steeped in government mistrust. 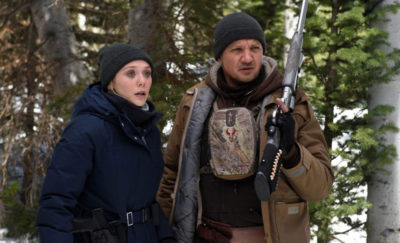 Filmmaker Sheridan lived on an Indian reservation while researching the screenplay, but he doesn’t emphasize the poverty, government mistrust and despair of reservation life. However, he makes his point via an early shot of an upside-down American flag at the entrance to Wind River.

Near the beginning, a title card announces the story is inspired by true events, at the end, just before final fade out, Sheridan tells us that missing person cases aren’t even tracked in native communities. Is the point of the movie that native lives matter? I don’t know. But the beautifully crafted and bloody story sure held my attention. Now playing Palm Desert’s Tristone10 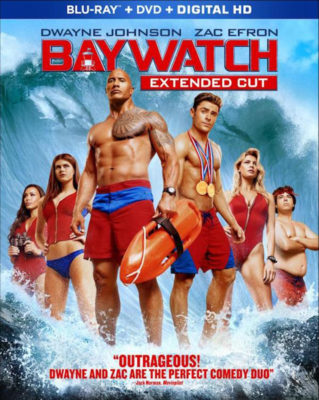 Seth Gordon’s action comedy is set in Florida’s fictional Emerald Bay beach community. When a dangerous crime wave hits the beach, legendary lifeguard Lt. Mitch Buchanon (Dwayne Johnson) leads his elite squad badass lifeguards on a mission to prove you don’t have to wear a badge to save the bay. Joined by a trio of hot-shot recruits including former Olympian Matt Brody (a ripped Zac Efron) they ditch the surf and go deep undercover to take down a cold-blooded drug queen (Priyanka Chopra) in order to “save” their beach.

The movie is pretty much what you expect if you’re familiar with the TV version. There’s some nice action sequences and random bits of snappy, self-aware dialog mainly from Johnson at Efron’s expense. Penis jokes and images don’t add a lot to the movie experience, but it’s still fun to see “The Hoff” and Pamela Anderson make cameo appearances. 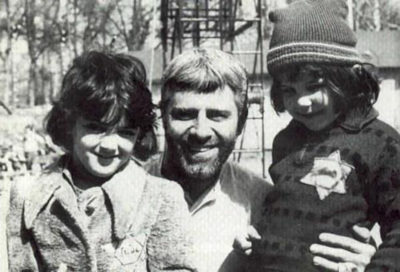 With the death of Jerry Lewis this last weekend, there’s been talk that his controversial and much maligned, but mostly unseen – and unreleased – film THE DAY THE CLOWN CRIED will find a posthumous and receptive audience that will claim the disturbing holocaust fable a dark masterpiece .

The other Lewis story making the rounds is that his longstanding association with raising money for a muscular dystrophy cure (almost a billion dollars) is a result of his guilt when someone pointed out that his spastic comedy persona was offensive to those suffering from the debilitating disease. It would be interesting to know the truth behind his remarkable philanthropic achievement.