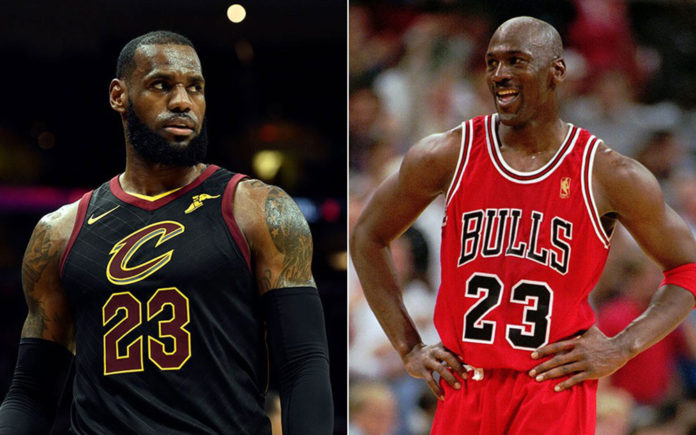 What LeBron James has been doing for the past six weeks or so is breathtaking. It’s not just the near triple-double nightly numbers; it’s the complete command and mastery of the game that puts him in a rare niche of superior all-around players. He has even spiced things up with a couple of game-winners, one of which — the casual transition buzzer-beating banked wrong-foot runner that KO’d Toronto in Game 3 — already has earned a spot on the short list of truly iconic NBA moments, and not just Cleveland Cavalier moments.

All this has led to a renewed discussion as to just where LeBron fits in the all-time pantheon. The more time passes and the more LeBron keeps adding to his résumé in Year 15, it’s pretty clear that the Greatest Of All Time (GOAT) crown belongs to one of two people: LeBron or, of course, Michael Jordan.

In this discussion, it is necessary to establish the ground rules. This argument is highly aesthetic. The old-fashioned centers were a different breed, with different job descriptions. What we are talking about when the topic turns to GOAT is about identifying the greatest practitioner of the art, the most complete player, the one who has more ways to beat you, the one who imposes his will on not just his teammates and the opposition but the game itself.

Who is the greatest non-center ever?

Some say it has to be Michael. He has the rings. Yes, he does. He has six. LeBron has three. It’s also undeniably true that LeBron moved from Cleveland to Miami to team up with a pair of established stars to enhance his chances to win, something someone in Michael’s day couldn’t have done even if he wished to do so.

If the argument is to be decided strictly on the basis of ring total, Michael will more than likely remain in front. Then toss in the fact that in one aspect he was the anti-Russell. In none of his six championship seasons did he even need to play a seventh game in the Finals.

One interesting argument is, which one has done more with less? Here they are remarkably similar.

You may be surprised to learn that Jordan played with just five Hall of Famers in his 15 years, and one of them was a 43-year-old wrapping up his career in a 43-game auxiliary role, Robert Parish. The other four were Scottie Pippen, Dennis Rodman, George Gervin, and Artis Gilmore. Now, Toni Kukoc might get in the Hall as an International Committee selection someday.

LeBron has played with two Hall of Famers, one of whom was a 37-year-old in his penultimate season. Give up? It was Shaquille O’Neal. The other, of course, was Dwyane Wade, who is a mortal lock Hall of Famer-to-be. He has also played with three conceivable future Hall of Famers in Chris Bosh, Kevin Love, and Kyrie Irving.

It’s interesting to contrast these careers with some previous all-time greats. Russell played with 11 Hall of Fame players, some of whom would most likely not be in the Hall had they not played alongside Russell. His great rival Wilt played with 10, not including Pat Riley, a coaching enshrinee.

Kareem Abdul-Jabbar likewise played with 10. Larry Bird played with eight. His great rival Magic Johnson played with five. (Bet you thought that number would be higher.) Finally, Oscar Robertson, the consensus GOAT before Michael came along, played with four, not counting the regrettable seven games in which coach Bob Cousy activated himself in 1969-70.

Let’s get back to LeBron. What he did in lugging the 2007 Cavs to the Finals was astounding. His mates included Drew Gooden, Sasha Pavlovic, Zydrunas Ilgauskas, Larry Hughes, Anderson Varejao, Donyell Marshall, Daniel “Boobie” Gibson, Damon Jones, and Eric Snow. That’s some heavy-duty lugging. And now he could be going to his eighth straight Finals? You must give the man his due.

We all know the game has changed and that it is always difficult to compare eras in any sport. But I have no doubt Michael would thrive in this game (no hand-checking? wow!) and LeBron would excel in the game of 30 years ago (Karl Malone’s body and Michael’s agility? wow!).

Anyway, LeBron is here and he has never been better. The Celtics’ kids have done very well so far. Whether they know it or not, they’re about to enter grad school.