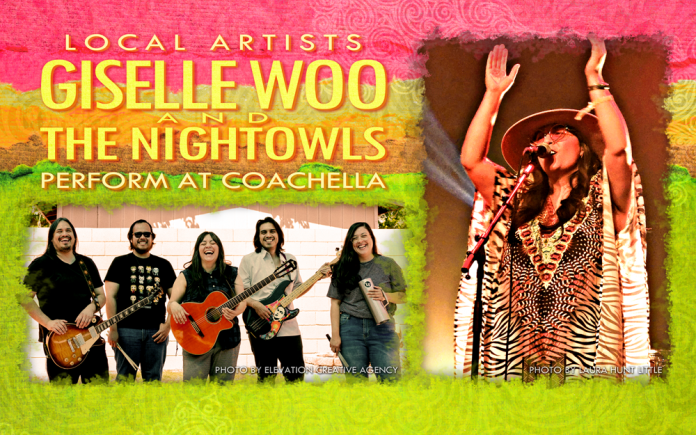 It has been a whirlwind of a year for desert-bred band Giselle Woo & the Night Owls. In addition to releasing their newest album, Everything, they are performing their biggest concert to date at the Coachella Valley Music & Arts Festival.

An overwhelming sense of excitement and accomplishment is felt by Giselle Woo (vocals, rhythm guitar), Christian Colin (lead guitar), Marco Murrieta (bass), Jose Ceja (drums), and Janine Rivera (vocals, percussion) as they embark on what feels like the peak of their musical journey so far.

The band has been practicing three to four times a week for the past few months in anticipation of their Coachella sets, seeing which songs get the most reactions from the crowd. Giselle Woo & the Night Owls have known they were going to play Coachella since August of 2019, and the two-year COVID postponement has made it a time to perfect their set list. 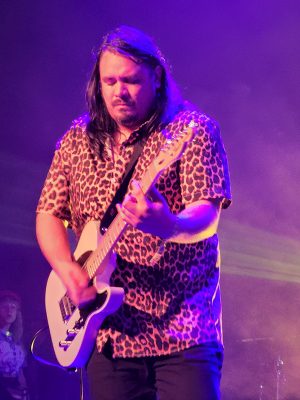 “Coming into the Festival now, we feel more prepared as opposed to when the opportunity first arrived. We are still in a state of disbelief that we even get to play at Coachella, and I think the emotions will really kick in once we’re on stage and start playing. It still feels like a dream,” said Marco.

“It’s historic. We’ve never experienced a pandemic like this in our lifetime and just to be able to say that we made it through is a big deal. It feels like a rebirth and we feel so excited to be part of this moment,” added Giselle.

Giselle Woo & the Night Owls have a collection of songs spanning 10 years, with their Coachella set list comprised of songs from their last EP to their newest album, Everything. Everything was recorded in Cathedral City at the Sound Hub by Frank Michel as the sound engineer. 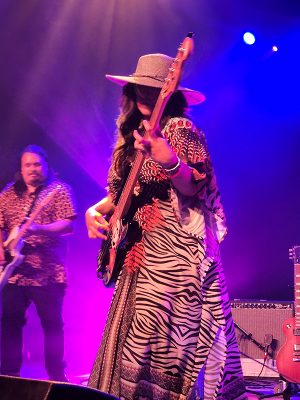 It is assured that audiences will be immersed in new sounds and rhythms they have never heard before—from rock to folk and Cumbia. As the front woman of the band, Giselle has written most of the band’s repertoire of sound years prior.

“The new record is definitely a culmination of all of our personalities. We’ve been asked before to describe our sound and none of us have a cohesive answer. It really is just our experiences coming through and what we play,” shared Jose. 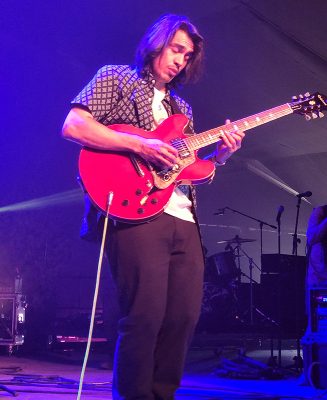 “Someone came up to us and said, ‘Why do you guys sound like all of my favorite bands in one?’ The reason why I think we named our record Everything is because we have a little bit of everything in there. We have a reggae track with Mikey Reyes, Cumbia, love ballads, some blues, psycho-billy, and surf rock. The goal was to showcase our talent and diversity,” said Giselle.

Another aspect of their sound originates from Latin music and with their inclusion in this year’s Coachella Fest lineup, Giselle Woo & the Night Owls hope to introduce audiences to the Chicano influence of their band that reflects the Coachella Valley cultural duality of English and Spanish language. 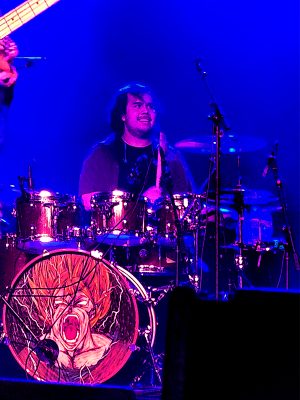 “I think the music will call to people who speak either English or Spanish and identify as Chicano. We are so proud to represent that side of our culture,” shared Janine.

“One of my biggest moments of pride is when I’m on stage and wearing Mexican dresses and singing in Spanish. I feel so honored to be able to share my culture. I grew up listening to Selena and other iconic Latino artists. It’s a huge sense of pride to tap into the culture. We all carry our roots that we stem from deep in our hearts,” stated Giselle. 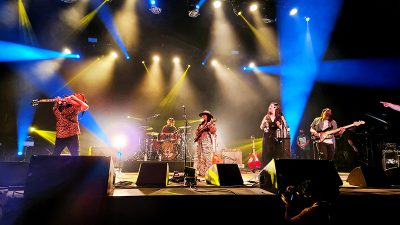 Although the band has performed throughout the Coachella Valley, the idea of performing outside of their desert home is an ever-present goal on their vision board that they hope to fulfill in the future. The opportunity to perform at Coachella Fest may act as a springboard to do other music festivals outside of the state or country.

“We want to go outside the 760 in terms of music festivals. I personally liked performing at the Date Shed and I would have to say my favorite performance that we’ve done so far was at the Tamale Festival this last December in Indio,” said Giselle.

“We have grown substantially as a band since the first time we all played together. At first, we were just trying to build trust with one another as strangers in a room. Over the years just jamming and rehearsing together, it helped us grow and realize that we are here for each other. At the end of the day, we just want to continue to get better and grow together,” said Marco.

Future aspirations for Giselle Woo & the Night Owls include being an opening act for a band on tour to get their foot in the door for bigger opportunities. This includes touring outside of the states in Japan or Mexico.

“Everything has been happening organically, and I think if we continue to manifest and work hard, we’ll always have that dream in mind. Coachella was a dream, and now it’s finally coming true,” said Giselle.

Giselle Woo & the Night Owls will be performing on Friday at the second weekend of Coachella Fest, and at the Oasis Music Festival on May 14, presented by Agua Caliente Casinos, at the historic Plaza Theatre in Downtown Palm Springs.