Deservedly, Joshua Tree native Grady James is our CVMA ‘Best Male Vocalist’ of 2019. The vocalist and guitarist, along with bassist Adam Nounnan and drummer Tim Johnson were also awarded the CVMA for ‘Best Country’ after releasing their first ever single, “Coming Home” earlier this year. The song is a Blues-Country-Rock, foot-stomping classic that drew inspiration from his time away from loved ones and pays homage to his father. The fetching tune only needs the stretch of time to establish itself as enduring.

Coachella Valley Weekly interviewed the uplifted James who is garnering mounds of success as a performer as well as songwriter and producer.

CVW: How are you and the band celebrating your triumphant 2019 CVMA wins for ‘Best Country’ & ‘Best Male Vocalist’?

James: “That was such an incredible night! Phil Lacombe and Tracy Dietlin and the CV Weekly team really do such an incredible job putting this together for all the talented artists in the valley. It was exciting from beginning to the end. ‘Best Male Vocalist’ was the first award of the night so I feel like I hadn’t settled in. I truly have never been more nervous to go on a stage than when I went up to give an acceptance speech, which was a completely new experience for me. Later in the evening I was backstage with the band sound checking for our performance when they announced, ‘Best Country Band… Grady James!’ Experiencing that with the band was so much fun. It amplified the excitement for me because all three of us were together on this. Adam and Tim really deserved that one! I have worked as a solo artist for most of my life and having the guys with me as a band has really elevated everything and brought this whole project to another level. I am still on a high from that night! This desert has so much talent, it was such an honor just being nominated but to win was extremely humbling.”

CVW: You performed your big hit “Going Home” at the CVMAs. It’s been such a popular and well-received song. It’s one of those songs with a potential long shelf-life.

James: “This was my first official release and to have people support it like they have really means a lot. Brad Mercer saw me play it at a small gig at THE RIVER at Rancho Mirage about two months before I released it. He was the first to spot it, and he was the first to play it on the radio. His support led to “Going Home” being successful so I am grateful for that.”

CVW: How satisfying is it for you to see your fans sing along?

James: “I think anyone who plays music for a living has had to deal with life on the road or being away from home and your family for a long time. That was the inspiration for writing it as I was driving back home from Nashville, Tennessee. Seeing people sing along to a song you have written is probably the coolest thing for an artist to experience.”

CVW: You grew up in Joshua Tree, CA and came out a country music artist. How did that happen? 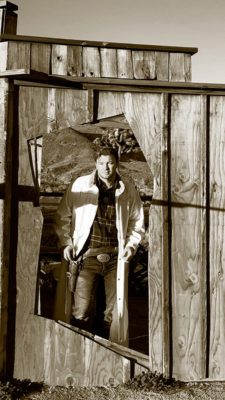 James: “Ha! That’s a hilarious question! Joshua Tree has become oddly popular over the last few years. It is something different to every person who goes there, so its hard to know what its reputation is now. I believe the average L.A. ‘hipster’ who goes out there to ‘find themselves’ has probably had a very different experience of what Joshua Tree is than me. I grew up in a pretty secluded area. We had six horses, several pigs, a coop full of chickens, some goats and all kinds of other animals on five acres. It’s a cowboy town or at least that’s how it was for me. My dad was a true cowboy from Dalton, Georgia and my mom is kind of a Flower child California girl. I was never gonna grow up to be in a metal band. It was country music all the way!”

CVW: Your father, Jim Arnold, was also a working musician. How much did he influence and inspire you and what was your relationship like?

James: “I lost my father almost three years ago now. It is truly the greatest loss I have experienced in my life. My dad was my best friend and we had a great relationship. He influenced me in every way a man can be influenced, and I am forever grateful to have had that. He worked as a musician most of his life. He played the drums and bass. On my 10th birthday he bought me my first guitar and together we took guitar lessons. He taught me ten old Country songs on the guitar so I could play my first ‘concert’ for family. After he realized that I could sing and play enough to put on a little show he never played the guitar again. That was one of the many things he did to go above and beyond to help me. He still inspires me as the last verse of “Going Home” is about how he went home to be with the Lord, and I hope to see him again.”

CVW: You’ve been a part-time Nashville resident the past few years. What have you gained both as a musician and as a human by living there? 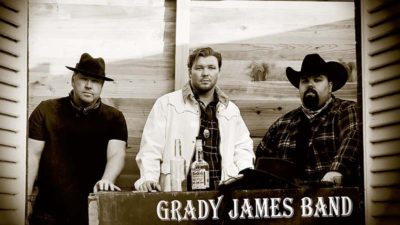 James: “Nashville is a great city. I have had a place out there for almost seven years now. I would say just hanging out there in the scene has made me a better writer for sure. Songwriting is king in Nashville and they set the bar high. There is also a ridiculous amount of competition which pushes you to be better. Aside from playing downtown, I have been mainly a behind-the-scenes guy out there. I’ve been lucky to work with a lot of talented artists in as a producer and a songwriter. It has led me to a lot of great things.”

CVW: You worked with Gyth Rigdon, NBC’s The Voice 2019 runner-up. He made it to the finale and performed a song you co-wrote together. That song went to #1 on iTunes. What was that like for you?

James: “He is a great singer who I write a lot for and produced both of his records. Getting to the finale meant he was asked to perform an original song. He ended up singing a song he and I wrote, “Proof I’ve Always Loved You,” in his native Louisiana. The Voice released it that night and it went to #1 on the Apple Music iTunes Top 100 Country chart as the most streamed song and charted on six different billboard charts. Definitely the biggest single I have had to date.”

CVW: You were diagnosed with Type I diabetes at a young age. It doesn’t appear to be limiting your drive to make music and live your life to the fullest. What would you like people with similar challenges to take away from your struggle?

James: “It has caused a few dramatic moments in my life. I have passed out due to low blood sugar while at the desk producing and after gigs. It took some getting used to, but I have been able to find a good balance in maintaining my blood sugar and still living a musician’s lifestyle with the hectic travel and hours. I travel a lot and talk to people and no matter how good some seem to have it, there is always challenging parts to life, and diabetes is mine.”

CVW: “Going Home” really set the bar high right out of the gate for you. When will we see new music?

James: “Yes, right now I have new music recorded getting ready to be released. I had the next single all picked out when Adam and Tim flew out to Nashville to play CMA Fest 2019 with me and we ended up writing a new song together. It turned out so cool and it really shows off the musicianship in the band. Not only have I never made or produced a record like this before, but I haven’t really heard anything like this song by anyone. We are going to put this one out next as a band, and I am so excited about it! It is co-written and played by Adam and Tim, the song is called “Born Again Country.” That goes to show how things have changed since they have teamed up with me. Adam is a childhood friend who for many years I played music with off and on and I was just playing solo acoustic shows locally when Tim came up after a gig to talk to me about putting the band project together. This is the most fun and fulfilling thing I think I’ve ever done!”

CVW: You’re performing at the Idyllwild Strong Festival. Why is it important for you to participate in events like this? 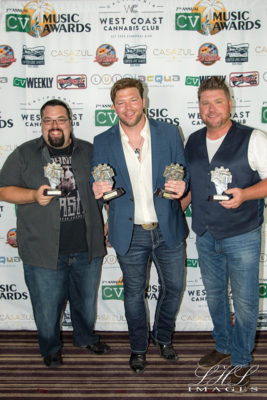 James: “Idyllwild Strong is not only a great music festival with over 100 artists performing over three days but a benefit to help the community of Idyllwild recover from the devastation they have had to deal with. When we were given the opportunity to be a part of this event, the band jumped at the chance to donate our time and music without hesitation. This will be my first time performing there and we are truly honored to be a part of it.”

CVW: You have a reserved aura about you and are adamant that you couldn’t do this alone. Anyone else you’d like to mention?

James: “I would really like to thank all the people who have helped me along the way. Phil and Tracy at CV Weekly have been so supportive. Brad of Brad Mercer’s Bands ‘N Fans and Brad’s Pad and Lisa Lynn Morgan at Big Rock Pub too. They have been so good to us and we have had great times playing their shows and venues. I am also thankful to Steve Johns and everyone at Palm Canyon Roadhouse. Gregory D Lariviere, the owner, gave me my first gig when I got out of Musicians Institute College – College of Contemporary Music and continues to give me gigs. Thank you to Michelle and Casey at JC’s Cafe, John Labrano at The Red Barn and so many others who have supported me. I am grateful to work with people I also call my friends. And last but not least, the fans. Ya’ll are what makes this happen, thank you! Hope to see ya on down the road.”

CVW: What are some of your upcoming events? 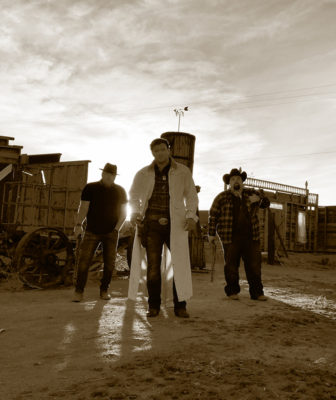 James: “If you follow music in the desert you probably already know about Vinny Berry. He is a rocker and you maybe wouldn’t think of us playing a show together, but it’ll be happening Thursday, August 8th at Palm Canyon Roadhouse. We have talked about doing this for a while and I’m glad it’s finally happening. I will also be at Brad’s Pad with Brad and the gang Tuesday, August 13th at LIT at Fantasy Springs Resort Casino. Then there’s the Idyllwild Strong Benefit Festival August 17th at 5 p.m. on the Merkaba Stage. Hope to see y’all there!”