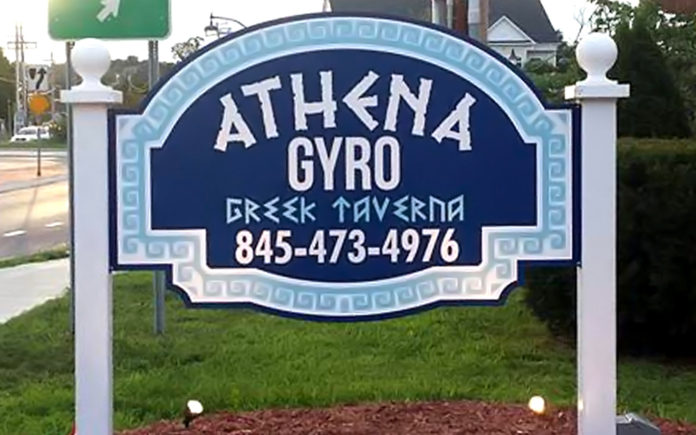 Craving a Gyro? Don’t know what a Gyro is? Well, you can get both of these questions resolved with a visit to one of the best Greek eateries in the Coachella Valley, at Athena Gyro in Palm Desert.

It’s a debate of sorts on how to actually pronounce the delectable sandwich. Is the “G” leading the word, or is it silent? The answer is no, and yes…kind of. You are not doing a dance, so get the gy-rate out of Gyro. The easiest way to pronounce it is to sound it out a bit, YEE-roh. There you go! But in honesty, whether you can say it correctly or not, it won’t change the fact that the Gyro is a fabulously hearty and delicious sandwich. And with a name of the dish headlining the name of your restaurant, it better be good, and at Athena Gyro, it absolutely is.

Athena Gyro opened in the Bristol Farms Shopping Center Palm Desert in July 2016, and sits in the funky roundish building at one of the entrances of the center. It had been a long time dream of owner Alper (“Al”), to open his own restaurant, and after putting his savings into action, he finally did. As a lover of history, Al decided to name his restaurant after Athena, the goddess of wisdom. The charming restaurant reflects Al’s Greek and Turkish heritage, with many of his recipes passed down from his family, but with his own twist on them making the dishes uniquely his. 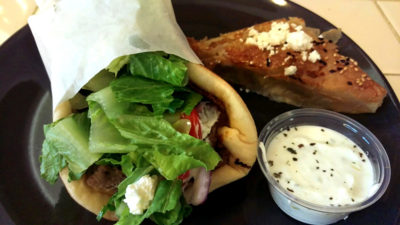 The Gyro is undoubtedly the star of the menu, and is offered in two different ways. Guests can either order it as a sandwich or served open faced with rice and the pita on the side. Al’s Gyros are traditional, made with layers of seasoned lamb and beef placed on a Gyro Spit, and cooked rotisserie style with a heated lamp. Al’s Gyro meat does differ, as he likes to place onion and tomato at the top of the cone, which adds another level of flavor to the meat. The meat is then shaved off, and placed in the pita bread with red onion, tomato, romaine lettuce and tzatziki sauce. Al offers either lamb or chicken Gyros.

On my visit to Athena Gyro, I, of course had to try the Gyro. I ordered mine as a sandwich on the appetizer side which comes with Spanakopita (phyllo dough filled with a feta cheese and spinach mixture). My Gyro sandwich was put together well, with the right ratio of meat to veggies, to pita.

The pita was light and pillowy, lovingly hugging the filling. The meat was savory, with the addition of the tomato and onion dripping complementing it nicely. It was a very satisfying Gyro, one that I would happily order again. 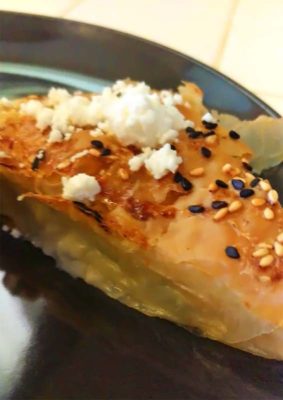 Athena Gyro has more than just the sandwich. Al also has other mainstay Greek dishes on his menu which include, Mousaka (eggplant, potatoes, ground w/meat sauce topped with tzatziki sauce and baked), Kebabs (chicken or lamb) and even Falafels, plus many other items. Al’s favorite dishes at his restaurant include his soups, the Avgolemono (lemon, chicken and rice) and Fakes Soup (red lentil soup, made Al’s special way). He also points out that he makes a pretty mean Lemonade (lemons, Valencia oranges, Mexican limes, mint and a secret ingredient), which ce daily to keep up with demands. Of course his Baklava has become a crowd pleaser as well. Athena Gyro is opene d daily from 11am to 9pm, and their prices are very moderate. They offer a Lunch Special of a Gyro with a side of soup or salad and a beverage for only $8.99, as well as a Happy Hour from 3pm to 9pm with discounts on wine/beer and appetizers. On weekends make sure to ask about their featured specials which can range from Lamb Chops to Shrimp dishes.

Whether you’re in the mood for a meaty Gyro, or Kebab, Athena Gyro will delight you with their savory Greek dishes again and again.