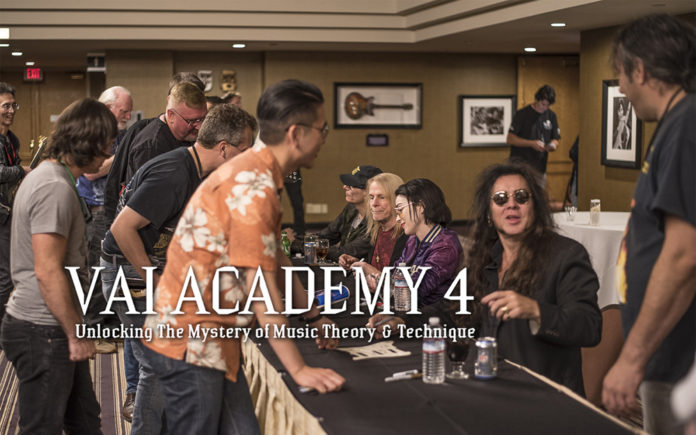 A couple weekends ago, The Hard Rock Hotel Palm Springs hosted guitar genius Steve Vai and his Vai Academy Guitar Camp. Featured this year were Vai, Yngwie J. Malmsteen, Steve Morse and St. Vincent. In its fourth year, the academy allows students of all ages and levels to pay for packages that include 4 days and nights discovering the intricacy of the guitar while jamming the day away. Also included are workshops, nightly jam sessions and multiple jam rooms fully loaded with gear. This year’s theme was ‘Unlocking the Mystery of Music Theory & Technique.’ Campers also had an opportunity to jam with Steve Vai on stage. Where else can you do that? 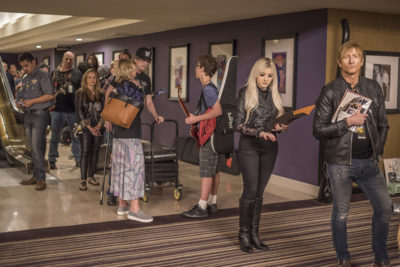 Since the Hard Rock Hotel opened in 2013, many local residents who are also rock and roll fans expected the more traditional Hard Rock to set up shop. This event establishes the dedication the Palm Springs site has to match the entertainment of any of its sister hotels and casinos around the world. Hard Rock Hotel Palm Springs is the desert’s international landing-place!

Steve Vai is a virtuoso guitarist, visionary composer, and consummate producer who sculpts musical sound with infinite creativity and technical mastery. At 18 he began his professional musical career transcribing for, and then playing with, the legendary Frank Zappa. More than three decades, Vai has proven himself, in his own right, one of music’s true originals. He boasts career sales of over 15 million records, 13 Grammy nominations, and three Grammy wins and has toured the world as a solo artist, as a member of G3, and with Frank Zappa and bands such as Alcatrazz, The David Lee Roth Band, and Whitesnake. As an accomplished audio producer, Vai has written, produced, and engineered all of his solo albums, released via Favored Nations, his own independent record label that has released over 70 albums by legendary musicians such as Tommy Emmanuel, Steve Lukather, Eric Johnson, Billy Sheehan, Larry Carlton and much more. His career accomplishments have earned him honorary doctorates from Berklee College of Music and Musicians Institute.

“Not enough can be said about Steve Morse. I knew of him long before he knew of me. In regards to technique, he was a bar-raiser of the highest order as early as the mid to-late seventies. His contribution to the fusion of country style guitar playing and progressive rock is historical and powerful. He has a completely melodic and inspired ear, and he’s just one of the nicest guys I’ve ever met. It was an honor for him to have joined us!”

Steve Morse is a guitarist renowned for his intricate compositions and innovative techniques. Having started playing guitar around the age of 11, he later on attended University of Miami’s School of Music, where he studied classical guitar and jazz. A ‘guitarist’s guitarist,’ he was voted ‘Best Overall Guitarist’ in the Guitar Player Readers Poll for five consecutive years and being inducted into their Gallery of Greats. His work has received seven Grammy award nominations, and he has appeared on over 200 albums.

Morse has established himself in a wide range of musical genres, beginning with bands such as the Dixie Dregs, the Steve Morse Band and Kansas. In 1994, Morse joined Rock & Roll Hall of Famers Deep Purple, and is the band’s longest-serving guitarist.

“I’ve known Yngwie since he came to America and I think that people are intimidated by his confidence. He’s so confident in what he does. I think to know Yngwie is to really, really like him. I know how intense he is. Yngwie doesn’t compromise. There are no excuses. He plays the way he feels is appropriate for him. He’s got a lot of energy and a lot of passion. When you’re going to work with someone like Yngwie you’ve gotta know this and you’ve gotta let them just cut loose and do his thing, you know?”

Yngwie Johann Malmsteen is a world-renowned guitarist from Stockholm, Sweden. As a young boy, Yngwie originally had no interest in music, but that all changed on September 18th, 1970 when he saw a TV special on the late Jimi Hendrix. Seven-year-old Yngwie watched in awe as Hendrix blasted the audience with torrents of feedback and sacrificed his guitar in flames. Yngwie’s career has spanned over 40 years with over twenty albums to his name. Drawing influence from classical composers such as Bach, Paganini, and Vivaldi, Yngwie is responsible for birthing the neoclassical genre to the world of rock.

“I first heard St. Vincent in my dreams perhaps before she was born. What I mean by that is, I instinctively felt that someday a person was going to come along and make the creation of music—utilizing the sonic diversity of the guitar and keyboards, quirky and pounding rhythmic grooves, unexpected and unique melodic harmonic atmospheres, fearless vocal and lyrical expressions—into deeply dimensional audio art. When it showed up being delivered in a frame that emanated such a magnetic alien type beauty, it felt like the manifestation of the dream in a perfection that I personally couldn’t have dreamt of. She is completely and utterly something else. I’m floored by her.”

Musician and songwriter Annie Clark-aka St. Vincent-is one of the most distinctive artistic voices and arrestingly original guitarists of her generation. Her recent album, the self-titled St. Vincent, won her ‘Album of the Year’ designations from the NME, the Guardian, and Entertainment Weekly and the Grammy for Best Alternative Album. An incredible live performer, Clark has been heralded as ‘the first truly 21st century guitar hero’ by Guitar World magazine, and is constantly pushing the boundaries of today’s musical landscape.

“In the end, Vai Academy is all about sharing. We’re all in this together as musicians. I love that we all experience living life to its fullest by enjoying every moment alongside one another.”

The enthusiastic fellowship of the students was observable as they carried with them their respective guitars out of their cases all around the hotel. We hope Vai and company decide to return to the Hard Rock Hotel Palm Springs for year 5.0 and beyond!