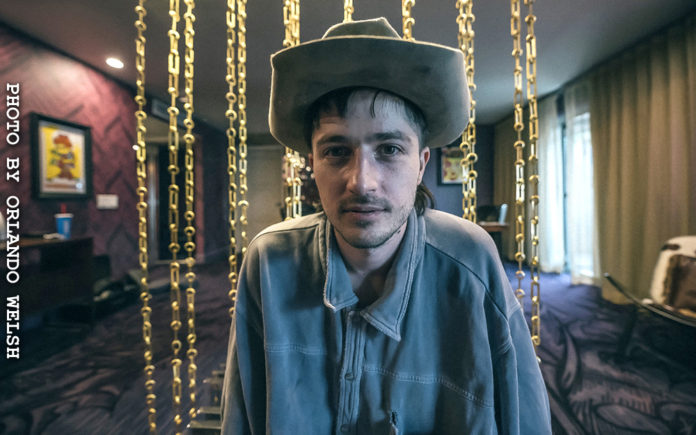 Black Lips are an indie band from Georgia. They got their start in 1999 and have been going strong since. They gained attention in 2006 with write ups in Spin Magazine and Rolling Stone. 2007 carried on their exposure with a performance on Late Night With Conan O’Brien and in a New York Times’ write up on their dozen shows in 3 Days at SXSW in Austin.

Cole Alexander and Jared Swilley recently stayed at The Hard Rock Palm Springs and spent some time writing a song for their upcoming country album. The Hard Rock struck a chord with Cole. He made another trip out to Palm Springs with his girlfriend and Black Lips saxophonist, Zumi Rosow. Cole and Zumi have a side project they’re working on called Crush, and Hard Rock seemed to be a perfect place to ignite a creative spark with the duo.

Cole invited us to his suite and discussed a ton of stuff from Black Lips to Crush.

CVW: When did you know music was it for you?

Cole Alexander: “Pretty early on, I was fantasizing about it. I didn’t really know how to play. I couldn’t execute it. It was a total fantasy from like 3rd grade until starting high school. The first band I had – it was actually with Jared from Black Lips- I only sang because I didn’t know how to play anything. Jared played bass. I wanted to play guitar, but it wasn’t a super easy natural thing to me. Once I got it, it was all good.”

CVW: Who were your influences?

Alexander: “My first influence was probably Nirvana. They were the popular thing when I was a kid. Then I started getting into the Ramones and Link Wray. He’s one of my favorite guitarists. Then I got into oldies. Like the roots of punk rock. The Beatles were another one. They were an easy band to find. I had to find what I could when I was younger. Like on the radio and MTV. I liked Sonic Youth a lot.”

CVW: Going off of The Beatles, you and Sean Lennon have become friends and worked together. How did that happen?

Alexander: “Black Lips recorded Arabia Mountain with Mark Ronson. He grew up with Sean Lennon. So Mark invited Sean to the studio and we kind of made friends through that. He started recording a friend’s band, Fat White Family, and I got invited out for that. When I saw his studio in upstate New York, I thought it was pretty cool. We worked out him recording Black Lips as well.”

CVW: Did you and Zumi meet because of Black Lips?

Alexander:  “I met her through her band the K-Holes which was with an ex member of Black Lips. It’s kind of confusing because Jack (Hines) was in our band, then he left to start K-Holes. Then he came back and Zumi joined with him when he returned. We kind of absorbed their band.”

CVW: Can you tell us a bit about your side project with Zumi?

Alexander:  “It’s called Crush. We’ve been mainly playing around LA. We’ll get more serious when we get more time. Black Lips are working on a country album right now. When we have time, Crush will probably start by releasing some 7”s. We’ll work in a full album down the road.”

CVW: You and Jared were here a few months back. What brought you guys to The Hard Rock?

Adam Levy: “Yeah. I’m a fan of Black Lips and met Cole at a show at Pappy’s. I’m the Marketing Manager here at Hard Rock and I invited them to come check it out and maybe write something here. I’ve reached out to a few of my favorite bands. Senses Fail will be staying here. Under Oath will be staying here to write some stuff.”

Alexander: “It worked out good. Jared came here and we worked on music, now he’s coming back and we’re going to be working on music we wrote here. It’s been beneficial for our record. Sometimes you have to get away from your home base. There are no distractions. I think maybe Adam even recorded some of it.”

Alexander: “This album has progressed because of the Hard Rock. We’ve pieced a bunch of it together thanks to these guys being cool enough to have us.”