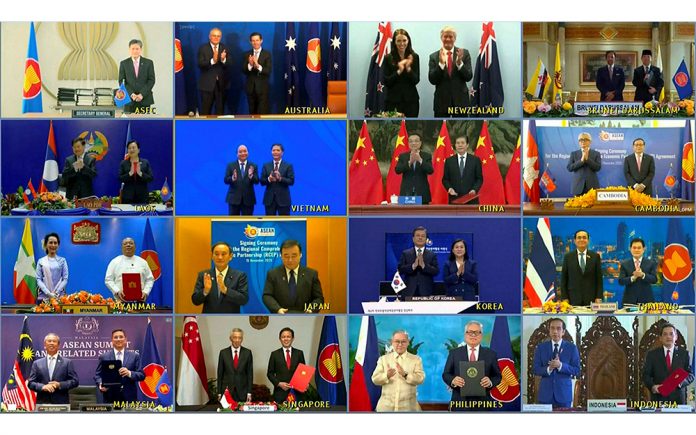 While the United States battled COVID-19 and each other as part of the 2020 Presidential elections, one-third of the world’s population came together and signed the Regional Comprehensive Economic Partnership (RCEP).  This trade agreement represents 2.1 billion of the world’s population and 30% of the world’s Gross Domestic Product (GDP).  RCEP is larger than the US-Mexico-Canada Agreement or the European Union.  It is estimated that this trade agreement will add $500 billion annually to world trade within ten years.

RCEP countries are Australia, China, Japan, New Zealand and South Korea along with Myanmar, Singapore, Vietnam, Cambodia, Indonesia, Laos, the Philippines, Thailand, Brunei and Malaysia.  These 15 countries came together to create the largest trade deal ever.  RCEP becomes effective in two years once each nation has approved the pact.

This is the first trade agreement of any kind between China, Japan and South Korea.

The agreement comes after eight years of negotiations started way back in 2012.  The pact means that 90% of the trade between these countries will be tariff-free within ten years.  The government of India had been part of negotiations but opted out of this trade pact under heavy concern at home that a flood of cheap goods from China could ruin large segments of their national economy.

The Prime Minister of Japan, Yoshihide Suga, said that he would firmly convey his government’s support for “broadening a free and fair economic zone, including a possibility of India’s future return to the deal and hope to gain support from the other countries”.

During the virtual signing, Malaysia’s Trade Minister, Mohamed Azmin-Ali said, “After eight years of negotiating with blood, sweat and tears, we have finally come to the moment where we will seal the RCEP Agreement.  (We have chosen) to open our markets instead of resorting to protectionist measures during this difficult time.”

To most of us, RCEP seems inadequate as it does not value intellectual property rights standards to the degree that we do while avoiding all environmental protections and labor rights.  Unless China improves its human rights records and discontinues its industrial espionage and theft of intellectual property, a sweeping agreement of this kind with the United States seems unlikely during a Biden administration.

RCEP is in stark contrast to the Trans-Pacific Partnership drafted under the Obama administration and scrapped by the Trump Administration.  U.S. concerns about that agreement parroted those of India.

While Americans are not part of this Pacific Rim trade agreement, the non-US subsidiaries of multinational companies based in the United States will be able to participate in the benefits of RCEP.

What does this trade agreement mean to the United States and why should we care?

While large multinational companies will find ways to work around challenged relations between China and the United States, the agreement signals a weakening in U.S. influence throughout the Pacific Rim.  As the United States has withdrawn from the international trade scene over the last four years and upset trade relations with many of our closest allies, we have created a leadership void that China has gladly filled.  RCEP signifies that China is a world economic power less reliant on the United States.  While the impact of the largest trade deal in history will not be known for decades, experts see this as a clear diminution of U.S. influence globally.  Over the long run, this will make it harder for the U.S. to influence global political and economic affairs.

By being a leader political and economic influence around the world, the United States developed the strongest economy in the world.  By ceding this influence to China to whatever degree RCEP signifies this diminution, we make it more difficult for future generations of Americans to achieve the economic successes of prior generations.