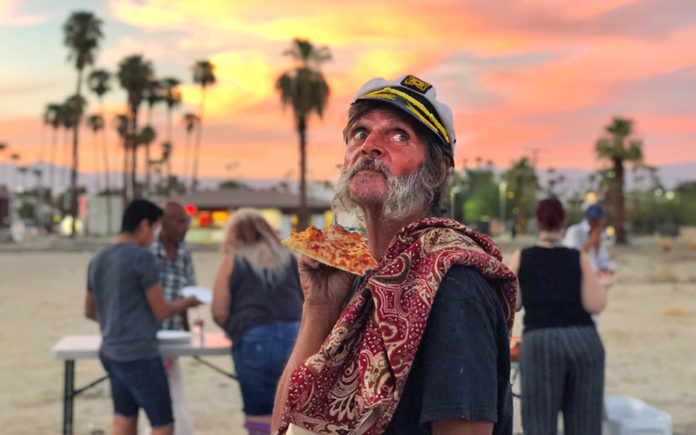 I had the opportunity to sit down with Tysen Knight in the wake of the world premiere of his latest documentary “Homeless Street Artist”. Tysen is equally known for both his street-style, boldly colorful art, and beautifully produced films that bring us to the streets to meet the most interesting cast of characters.

This is Tysen’s second film and the second consecutive year that he has been invited to participate in the American Documentary Film Festival here in Palm Springs.  His first film, The Art of Hustle: Street Artist Documentary was received with acclaim, winning the Oregon Documentary Film Festival for Best Picture and garnering him an invitation to Grenoble, France.  This film can be seen on Tysen Knight’s YouTube Channel: https://www.youtube.com/user/TysenKnightFilms

When asked about the difference between the two films, Knight candidly explains that this film was extremely personal for him based on a small stint of homelessness he himself experienced. “I just think everybody should have a place to live and stay, food and clothing.  I just can’t imagine people closing their eyes EVERY night, outside in the elements. That’s insane to me, in a country that’s supposed to be the richest country in the world and we have people sleeping on the streets, it just boggles my mind.” 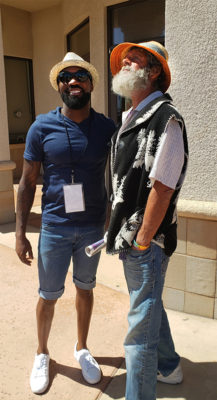 The conversation turned to Skratch, the homeless artist that is the focal point of the film. Skratch made an appearance in Tysen’s first film, The Art of Hustle, Street Artist Documentary and audiences worldwide responded to Skratch. To know Skratch is to love him and this transmuted itself to the audience beautifully.  Tysen knew instinctively that Skratch was the perfect subject for his next film. “Everyone was intrigued by Skratch, everyone asked me what had happened to him. I thought about that and decided if I could use this film as a platform to bring awareness to homelessness, why not feature Skratch is his own documentary. People need to know that the people they overlook every day are just as talented as everybody else.”

What happens next, and what perhaps neither Tysen or Skratch even realize, is one of the most beautiful friendships the audience may ever see develop and unfold before their very eyes. You immediately sense just how much Knight cares for Skratch.  Skratch steals the show while Knight takes a backseat, offering calm support and encouragement. Sitting in the theatre with both Knight and Skratch in attendance watching the movie together, Skratch still cannot believe this is happening and the audience has no idea he is there in the back row, watching himself on the big screen. They laugh with him and they cry with him as they get to know the eternally sunny, optimistic, tipsy, hilariously funny Skratch.

We watch as Knight presents Skratch with a bucket full of brand new art supplies. Skratch cannot contain himself and immediately grabs a bright yellow pastel, takes a bite chews it up and spits bright yellow on the brand new canvas. It’s weird and funny and takes Tysen by surprise, but the finished product shown later is nothing short of remarkable. There are flowers and paint brushes and bright colors pieced painstakingly and chaotically together on a tiny canvas. The sense is that this what the inside of Skratch’s mind looks like. Colorful, beautiful, delightful and without boundaries.  His childlike wonder and joy in the wake of his situation is miraculous.

On a different day, Tysen comes to visit and finds a confused and injured Skratch. His ankle is swollen three times its size. Skratch claims he was jumped and kicked in his sleep.  A sorrowful Skratch is too much for Tysen to bear and he finally convinces Skratch to let him take him to the hospital.  After being turned away from a hospital in Palm Desert, Tysen brings him to Desert Regional Medical Center where they take him in and patch him up. The next day, Tysen wakes a sleeping Skratch, only to discover that someone stole his crutches during the night. During the Q and A, an audience member asks Skratch how his foot is and Skratch gravely states that his foot is broken in several places and isn’t healing correctly because he is unable to stay off of it. “Being homeless is hard,” he says simply.

Two other artists, Catherine Lunsford and Will Harrell are also featured in the film. Both bring a sense of humor to their situation, laced with a cynicism we begin to understand once we start to relate to them as human beings who struggle to survive every day. Tysen treats every artist in his film with deep respect, paying them for their art. A touching moment ensues when Tysen comes to visit and Catherine presents him with a beautiful sketch of Tysen’s trademark logo, a self-portrait Knight drew of himself when he was eight years old. Tysen is visibly touched by the gesture and buys the sketch from Catherine. It hangs on his wall at home along with works from both Skratch and Will.

The film ends, the lights go up and there is a pause while the audience collect themselves. They soon realize that Skratch himself, along with an emotional Tysen are walking down the aisle. They applaud loudly, cheering Skratch on as he makes his way with Tysen to the stage. Tysen is overwhelmed by the response and unable to speak for several minutes, handing the microphone to a delighted Skratch.  Skratch takes to the audience immediately, admitting “I didn’t really believe this was happening. I mean, I knew Tysen was there but I guess I didn’t realize he was actually filming me. Seeing myself up on that screen, I hate to say it, but I think I sound intelligent!” He laughs in delight at his own intelligence and the audience laugh in delight with him.  He speaks with great admiration about Knight. “He was perfect. He just let me be me and when I would get a little lost, he would just make it so simple. He would ask things so calmly and simply.” He points to Knight and says emotionally, “I love this guy.”

Tysen says a few words and answers a few questions and then invites the founders of Street Life Project, a local nonprofit that serve the homeless in our valley, to the stage. Christian and Blaire Jelmberg answer questions from the audience on how they can get involved and discuss their soon to be realized dream of establishing tiny home campuses here in the Coachella Valley. Tiny self-sustaining homes to be used as transitional housing. Learn more about Street Life project and how you can help at:   www.StreetLifeProject.com.

When asked what was next on his agenda, Tysen says he will continue to make documentaries, his plans with Street Life Project being the top priority. “I want to piggyback off the success of this film and bring Street Life Project into the forefront of the conversation. Their tiny home project is pretty amazing and I believe it can make a  huge difference. I want to give them a platform to reach people that may want to get involved.”

Whatever Tysen Knight decides to do next is anyone’s guess. Tysen seems to run at the speed of light, creating art and films and always making sure that he is helping his community along the way. It’s what sets him apart from all the other artists in the valley. This need to serve, help, and most of all, inspire others.