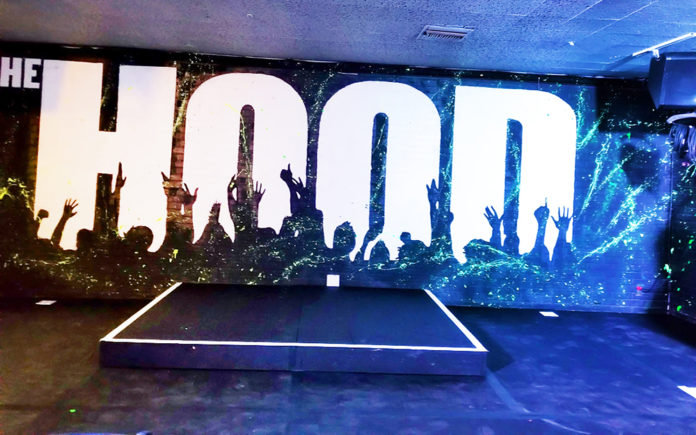 Christmas came early this year for The Hood Bar & Pizza in Palm Desert, California. The tenacity of a few good men and the willingness of owner Brad Guth have infused new life into what has been a prime spot for live music since it opened in 2011. With a new stage, sound and lighting, electrical work and paint job, The Hood has raised the bar for live entertainment venues everywhere. 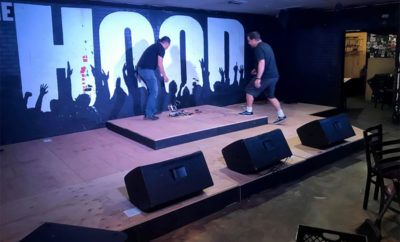 “We have added more tables, chairs, a new stage, and just purchased a new sound system in order to make our weekly events more enjoyable for locals and out of town guests alike. Time was donated by our local music community to build the stage and install the new sound system. We are also repainting to make it more of a friendly environment. I don’t want to be specific with costs, but suffice to say we have invested thousands to make it “the spot” for local musicians and nightly entertainment. Our number one priority is to provide the best possible service, offer quality products and entertainment, and create an atmosphere appealing to all walks of life; after all, it is the ‘neighbor-HOOD!’” 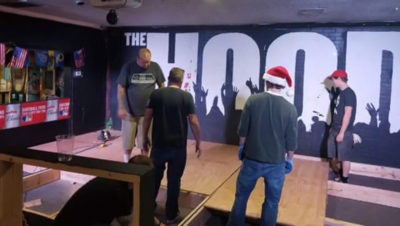 “I volunteered to build the stage and redo the electrical. Thank the Lord Baby Jesus that Jeff called Josh and said he’d be there. Jamie, Josh and I built the pre-fabbed stage at my house to make it an easier install at The Hood. The day of install we had a shit-ton of volunteers to help replace the stage. It was amazing to see people really care about this. It was even more amazing to see them put their money where their mouth is. My main reason for participating is because The Hood is a landmark in our valley. Seeing local bands struggle with the stage and the sound was infuriating. Our local artists deserve the best because this is their home. We approached Brad and he agreed. He foot the bill for new sound equipment and a new stage as well as paint, electrical and other needed upgrades. The best part was hanging with friends on a weekend.”

“I’ve always been a huge supporter and advocate of the local music scene in any way I can. I’ve been preaching since day one that the strange configuration of the stage and placement of the audio needed to be remedied. From phasing issues in the audio to tripping hazards on stage, I have tripped and smashed my head into some cymbal stands during a live performance before. A lot of us felt the same and started talking about changing things. We approached Brad about the stage and audio and got the conversation rolling. It’s amazing that the local music community cares so much and is willing to help make the scene better; where else does that happen? We’re lucky to have a music community that cares enough to volunteer their time to make his business a better place and I want to thank Brad for listening.” 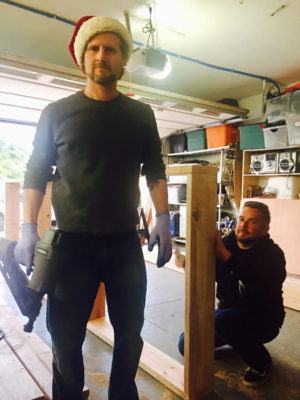 “I volunteered to help Marcus build and install the stage. This came out of several conversations between Marcus, Jamie, Arthur, Nigel and I. The old stage made very little sense. It wasn’t balanced. It made the bands look, feel and sound awkward. From the get-go, when it was changed to a corner stage, almost every musician I talked to did not like it set up that way. And it was worse for people watching the bands. And then the sound was off because the speakers were set at different distances. We all approached Brad about it and eventually he decided to replace all of it. We volunteered because we want the one place we have to play in be done the right way. We want the scene to have a good stage with good sound and lights. It’s pretty simple. The great thing was how many other people came by during the day to help. Armando Flores was there in the morning. Troy Whitford stopped by, as did Martin Berrera. Probably the best thing that happened was that Jeff Bowman called me up Sunday morning and said, “I saw your post on-line and I want to help.” Jeff volunteering his day to help us was invaluable. He is the owner of his own electrical company, so he was able to do all of that stuff for us just out of the goodness of his heart. Doing this reminds me of the Autism benefit. People and friends that you respect getting together to make something happen that is for the good of a lot of people, not just yourself.” 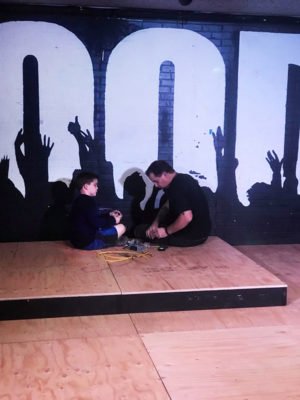 “I really think The Hood took two steps backward, visually and sonically, when they re-configured the stage a couple years ago. So, I was excited to see the Facebook post from Johnny, Jamie and Josh that they had built a new stage and were planning to install it. As a musician that will hopefully play on that stage many times in the future, and as someone with many years of construction experience, I really wanted to help the guys in any way I could. I called Josh and happily volunteered my time. Along with a handful of awesome Desert Music comrades, we got the old stage disassembled and removed, and Johnny and the boys got the new one in place.

I am an electrical contractor, so I offered up my services, and with a little help from my 7 year-old son, Kellen, we rewired the stage power and installed all new receptacles. It should be real convenient for everyone who plays there from now on. Overall, it was a remarkable day for Desert Music, and I’m proud to have been a part of it.  I can’t wait to play The Hood again!”

Coachella Valley Weekly looks forward to seeing everyone at the “new and improved” Hood. In the timeless words of Mr. Arthur Seay, “Support the scene because you are the scene!”