Early in his career, Iggy earned the affectionate sobriquet the “Godfather Of Punk.” It was a musical genre he practically invented. James Newell Osterberg, Jr. was born in Muskegon, Michigan, the only child of two loving parents.

Growing up, he became enamored with Blues, early Rock N’ Roll and Rhythm & Blues. He played the drums in High School bands like the Iguanas and the Prime Movers. (It was during his tenure with the Iguanas that he first became known as Iggy). His infatuation with the Blues was so all-consuming that he dropped out of the University Of Michigan and moved to Chicago.

Galvanized by those seminal sounds, as well as emerging bands like the Sonics, the Doors and MC5, he returned to his home state, formally adopted the stage name Iggy Pop and formed the Psychedelic Stooges. (Soon shortened to just the Stooges). The original line-up included brothers Ron and Scott Ashton on guitar and drums and Dave Alexander on bass.

Iggy was inspired by the over the top showmanship of James Brown and Mick Jagger. He also caught an early Doors show where Jim Morrison performed while clearly tripping on acid. All these elements coalesced and he became the most outre’ frontman in Rock history. He was the first to stage dive, roll in broken glass, puke and intentionally whip out his, um, second microphone

His antics enhanced, but never detracted from the Stooges’ shows. They were quickly gaining a reputation as one of the most incendiary live acts on the scene. Signed to Elektra Records in 1968, their self-titled debut, arrived in 1969.   Produced by ex-Velvet Underground visionary, John Cale, their music sounded like nothing else in the pop landscape. Brutal and primordial, it served as a template for every Punk record released in the next 40 years.

Their sophomore effort, Fun House was recorded in Los Angeles and released in 1970.  Unfortunately, it was ignored by critics and consumers alike. The band faltered and soon Iggy was in the grip of heroin addiction. Dropped by their label, the Stooges kind of imploded.  Luckily, Iggy met super fan, David Bowie, whose star was on the ascendancy.

Bowie helped secure a deal with Columbia Records and whisked Iggy off to England, intent on producing his first solo album. But a search for backing musicians proved unsatisfactory, so the Stooges (minus Dave Alexander) reunited. Newcomer James Williamson took over guitar duties and Ron Ashton switched to bass.  The result was “Raw Power,” their most assured record to date.

Despite its brilliance, Raw Power didn’t reverse the band’s fortunes. The Stooges broke up and Iggy descended more deeply into drugs, eventually checking himself into a mental institution. Although David Bowie was certainly mired in his own addictions, again he rode to Iggy’s rescue, inviting him to join his “Station To Station” tour.

More lastingly, they both relocated to Berlin. In the quieter environment, they were free from scrutiny and able to loosen the grip of addiction.  It was there Bowie created his own Teutonic tryptich, Low, Heroes and Lodger.  He also produced Iggy’s first two solo efforts, The Idiot and Lust For Life. Both albums were released in 1977, cementing Iggy’s position as the premier Proto-Punk provocateur.

Throughout the ‘80s and ‘90s Iggy continued to record and tour with mixed results on albums like Kill City, New Values, Soldier,  Party, Zombie Birdhouse, Blah, Blah, Blah, Instinct, Brick By Brick, American Caesar, Naughty Little Doggie and Avenue B.  During this era, he collaborated with  James Williamson, Ivan Kral from Patti Smith Group, members of the Sex Pistols, Blondie, Guns n’ Roses, Kate Pierson from the B-52’s and superstar producer Don Was.

In 2003 Iggy reunited (and it felt so good), with Ron and Scott Ashton on his 14th solo album Skull Ring. It was such a pleasant experience that they resurrected the Stooges.  At Ron’s suggestion, they recruited Minutemen bassist Mike Watt (Dave Alexander passed away in 1975).  The line-up was augmented with saxophone player Steve Mackay and they played Coachella that same year.

The Stooges recorded their fourth studio album, The Weirdness, in 2007.  Sadly, in early 2009, Ron Ashton died from a heart attack, once again, James Williamson stepped in to handle guitar duties.  In 2010, the Stooges were finally inducted into the Rock And Roll Hall Of Fame. (They had been eligible since 1994, and found an unlikely champion in Madonna, who actively advocated for their inclusion). A final Stooges album, Ready To Die, released in 2013 received universal acclaim. Scott Ashton died in 2014, but their legacy lives on in Gimme Danger, a Stooges documentary directed by Jim Jarmusch. It recently debuted at the Cannes Film Festival.

In between Stooges records and tours, Iggy made more solo records, Beat ‘Em Up, Preliminaires and Apres’. The latter two sung entirely in French. He also carved out a niche as a character actor, appearing in myriad movies and television shows.

Although he has been a solo artist nearly 40 years, Iggy Pop has always thrived in a collaborative setting. In 201, he met Queens Of The Stone Age front-man, Josh Homme at the Kerrang! Awards in Germany. Two years later he reached out to Homme to produce his 17th solo album. 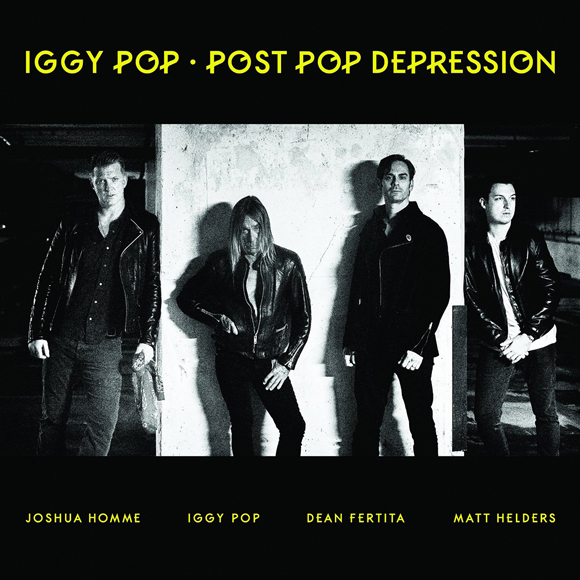 The album opens with the spare and haunting “Break Into Your Heart.” The workman-like rhythm is accented by a kick-drum beat, sweet n’ sour guitar licks and a tinkling piano. Iggy’s mien pivots between lovelorn suitor and stubborn stalker.

Iggy has always come across as the self-appointed Junkyard Dog of Rock n’ Roll. Even now, as he speeds toward 70, he remains defiantly shirtless and sinewy, equal parts icon and outlier. But the fact remains, that he has written some undeniably catchy songs.

Advertisers have used tracks like “Lust For Life” and even the ferocious “Search And Destroy” to shill for cruise lines and luxury automobiles. So it’s unsurprising to find a surfeit of hook-filled tracks here.

The layers of twinkly vibraphone and steel drums that open “American Valhalla” hew more closely to the Oriental mysticism of “The Siamese Cat Song” from the Disney classic “Lady And The Tramp,” than to any  Stoner Rock  or   Proto-Punk paradigm. But that’s part of its charm.

Buttressed by boomerang bass lines, morse-code guitar  riff-age and a snap-back beat, the lyrics seem to search for a  bit of heaven on earth, a place for Iggy and Jesus and  maybe some  Vikings to mix and mingle. Or perhaps he just saw a chance to rhyme Valhalla with “holla,” and went from there.

“Gardenia,” the first single, shimmers and shakes with arch blasts of shang-a-lang guitar and propulsive rhythms. Iggy’s shaded vocals are at their most   Bowie-esque as he pursues a woman whose attributes include an “hourglass ass, powerful back and slant devil eyes.”

The best tracks here are “Sunday” and “German Days.” The former is tethered to a galloping gait.  Stripped-down guitar riffs sting and strafe through the see-saw melody. Under Iggy’s lyrics extoling the pleasures of a lazy Sunday afternoon, Sharlotte Gibson provides breathless backing vocals and Josh Homme adopts his best Brothers Gibb falsetto. When the song powers down, a lush string section takes over, playing a majestically waltzy outro in ¾ time.

The latter opens with staccato guitar licks and suddenly time signatures shift, as a pummeling back-beat and punky piano runs tilt and shudder. Josh and Dean’s dueling guitar virtuosity collide and compliment as they navigating a series of thrilling aural switchbacks. Iggy’s vocals are appropriately Visigothic as he enigmatically insists “Germany must germinate, germinate in a German way.”

Other interesting tracks include the shambolic Spaghetti Western “Vulture.” Here, the lyrics offer an acrid swipe at the scavengers who populate the record industry; “Hoping to profit, he’s nobody’s friend, if he gets near your bones he’ll clear/He’ll jump your bandwagon ‘til it’s your corpse he’s dragging.” Iggy ends the song with a wordless yowl that’s part daven, part war cry.

“Chocolate Drops” is a stately Soul pastiche powered by prickly guitar, lap steel, vibraphone and graceful piano notes.  The lyrics include vivid scatological imagery that sort of drafts off the old adage “when life hands you lemons, make lemonade.”

Finally, the aforementioned “In The Lobby” weds prickly power chords to push-pull rhythms and a dissonant melody. The lyrics find Iggy cryptically unpacking his legend and squinting toward his sunset years.

The album closes with its penultimate track, “Paraguay.” The sing-song acapella intro gives way to strummy acoustic guitars and Flamenco-flavored piano notes.   Naturally, it changes course again, locking into a bludgeoning rhythm as a squalling, fractious guitar solo circles the melody like a screeching seagull.

Iggy drifts from contemplating retirement in the tropics, quickly launching into a vitriolic spoken rant, (“I just thought, well, fuck it man”), that is thoroughly disconcerting.  He comes off less the feral, menacing Punk, and more like a grouchy Get-Off-My-Lawn-Grandpa. It’s something of a restless farewell.

With both Lou Reed and David Bowie gone, Iggy Pop remains the lone sentinel. He has hinted that this might be his last album, noting, “In The Lobby,” that “it’s all about done.” Although, if anyone can pioneer AARP Punk, it’s Iggy.

Post Pop Depression debuted at #17 on the Billboard Top 200, making it his highest charting album in America. It’s also made a huge splash around the world.  More importantly, It is his most satisfying album in decades. If Iggy is ready to to ride off into the sunset now, he can.  The artistic and commercial success of this album only enhances his legacy.