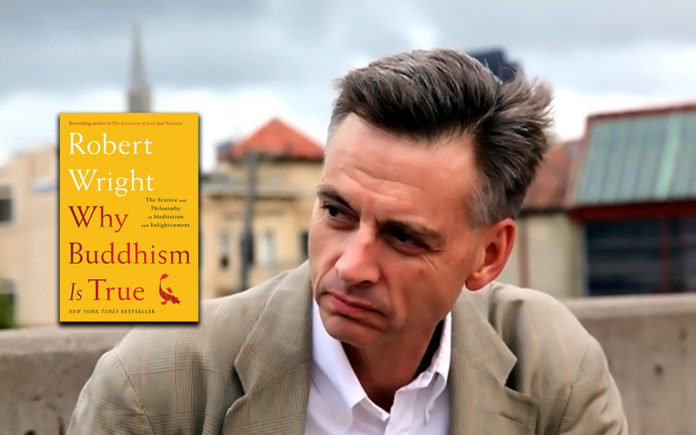 —–
Why Buddhism is True
by Robert Wright – Nonfiction
—–

What is true and what is real?  These seem like easy questions to answer.  But, we live in a world where “fake news” and “alt facts” obstruct and spin reality.  We are living in crazy and stressful times.  Why Buddhism is True: The Science and Philosophy of Meditation and Enlightenment by Robert Wright (Simon & Schuster, 321 pages) shares a way to reexamine our reality.

What Wright reveals in his book is a way to rethink our lives and reconsider how we function in this world as human beings with the help of some basic Buddhist philosophies.

Wright was raised a Southern Baptist, but he does not consider himself a Christian, nor does he claim to be a practicing Buddhist.

As an “evolutionary psychologist,” Wright begins with how natural selection has shaped our brains “to mislead and enslave us.”  That is to say, nature is only concerned about insuring our genetic material is delivered to the next generation.  Wright says our brains have built in thoughts and feelings that delude us so we are motivated to survive and pass on our genes.

As higher thinking, conscious mammals, these delusions can come in the form of anxiety, despair, hatred and greed, which cause us to be more competitive or hostile to others, and can bring about a sense of being dissatisfied.  These feelings can then direct us to feel hopeless, or can corrode our character, and this leads to suffering.

But Wright points out that these feelings of despair and angst are just illusions if we consider them carefully.

This is where Buddhism as truth comes in.  Buddhism teaches that pleasure is fleeting while suffering is a pervasive human condition.  Wright says the word for suffering can also be translated as “unsatisfactoriness.”

Our lack of satisfaction often drives us to bad behavior and unhappiness.

Wright argues that Buddhism can liberate our minds from the illusions that keep us from living fully, and help us recognize what is really true and important in our daily lives, and this is best done through “mindful meditation.”

Wright says that Western and Eastern Buddhism practice is very different.  Eastern Buddhists tend to be secular and don’t meditate; only the monks do.  Mindfullness, he says, is a western practice.

Ultimately, Wright argues that with meditation we get a handle on what is “true” and what is illusion, and begin to see the world and ourselves differently.   We can look at our weaknesses and deal with them directly in the process of meditation.

With regular mindfulness, we can observe and experience our feelings more clearly and honestly, and cease being enslaved to negative feelings.  As we better understand where and how these feelings affect us on a daily basis, humans can become more compassionate, thoughtful, and empathetic.

Shifting our perspective dispels the illusions.

I like Wright’s worldview and his enthusiasm for a more mindful future.  He suggests that we humans have moved towards tribalism — religious, social and political — creating more chaos, resentment and bloodshed.  He believes with minimal enlightenment, and acknowledgement of our human condition, it could be what moves humans to a more peaceful world.

Religion is definitely a part of Wright’s narrative, and I appreciated seeing religion in an evolutionary way.   He quotes Henry James and discusses the desire human beings have to find the truth.

But, before we can change the world, Wright insists we must start with taking a closer look at our own feelings and perceptions.

Wright feels confident that with regular meditation people can start to live a more contented life and better see the amazing beauty of the world that surrounds us.

Author Wright teaches courses in science and religion at several universities.  His previous books “The Moral Animal: Evolutionary Psychology and Everyday Life” and “The Evolution of God” reveal Wright’s own thoughtful evolution and maturity.  The author’s intellectual and philosophical growth is part of the joy in reading “Why Buddhism is True.”

Wright writes with wit, charm and self-deprecation, which makes his narrative easy to follow, understand and accept.  He is a regular guy thoughtfully considering our human condition.  Wright is not trying to convert anyone, yet he is making a significant attempt to bring humans to higher consciousness.  And, this is what Buddhism seeks.

Perhaps it is time to reconsider the nature of world religions and formulate a new paradigm that celebrates and respects the beauty of all living things on this planet.