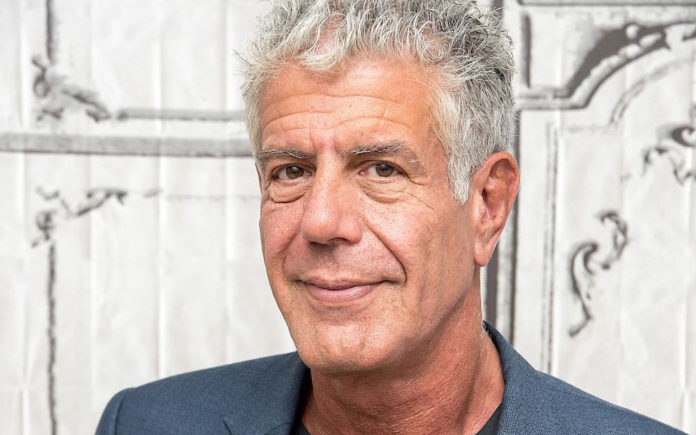 It was always a welcomed sound coming from the TV, something that I would look forward to with great anticipation as part of my television watching repertoire. The sound of Anthony Bourdain’s voice, then the sound of him sliding on the ice, finished by a couple guitar twangs, I knew it was time to travel and eat vicariously through him on his show No Reservations.

He was more than a traveler and food connoisseur, he was an incredibly gifted writer, and I think I relished more in his formation of words than anything else, often keeping a pad and pen near me to jot down text that would make my skin rise with emotional awe. I trusted him, his words always conveyed honesty, as if they were formed together long ago, introduced to create a harmonious friendship to layout his sentiments with cavernous color and tone….beautiful. Coupled by the fact that he would often exercise expletives, made me trust his authenticity even more (I’m always cautious of people who don’t cuss).

I am one of millions who have been affected by his tragic death with heartbreaking sadness. It is a loss of unmeasured proportions, one that will have long reaching consequences for his family and the world. His shows weren’t just about entertainment, but were infinitely educational. Intertwining geography, cuisine, politics, friendship, love and humanity. It was a college course in of itself, one that benefitted all who watched.

For me, the list of the things that I have learned from his shows is lengthy, and one that has merged into my sub-conscious whether I realize it or not, they are just a part of me now. The lessons shaped the way I look at food, kind of like Remy in the animated film, Ratatouille, when he is influenced by the ghost of Chef Gusteau, forever opening his mind to the magic of it. The reality is, is that you will see fireworks when eating really good food, and if you haven’t yet, keep opening your mind and you will.

It is with that influence, and my own family background and love of food, that I do my reviews with passion….I love it!! Many of the restaurants that I have reviewed and enjoy the most, are ones that I think perhaps that Bourdain would have enjoyed too. I sometimes try menu items and measure them by an assumed scale of his creation, always recognizing and celebrating umami when I experience it. It is with this expression that I pay tribute to him. The following is a collection of some of the Coachella Valley restaurants that I absolutely adore, (only some as this is an article and not a novel), and I would have loved to have brought Bourdain to them as a local restaurant foodie guide.

La Brasserie-La Quinta- This little French haven is cozy, quaint and has delicious menu selections that will give you visons of the Eiffel Tower dancing in your head. A couple of their stand outs for me is their Crater Lake Vodka and Citrus “Gavlax”(house cured salmon over toasted brioche, horseradish cream and whole grain mustard emulsion) and a dish that was often featured on Bourdain’s show in different incarnations, Pan Seared Foie Gras au “Pain D’Espice” (sautéed apple & pear, compote d’onion, sherry demi-glace). The oo-la la experience would not be complete without one of their off the chart intoxicatingly fabulous Grand Parisian Manhattans. www.labrasserielaquinta.com 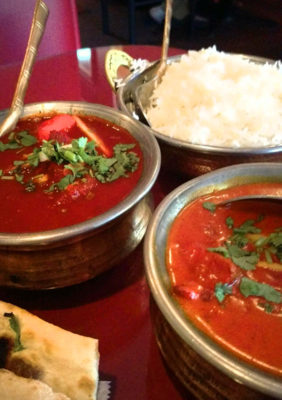 India Oven-Cathedral City– Every time I visit this little gem, I feel like I’m in New York City. It’s super tiny, and loaded with ambience and a hurricane of aromas that almost knock you out as you enter the door, fantastic! There are many dishes that bring my mouth to water at this place, and many that I have yet to try. One item that I did dive into recently was their Mulligatawny Soup (lentil soup with a special chicken broth and herbs/spices, level of heat requested). I’m not a big soup person per say, if it’s a choice between soup or salad, and Lobster Bisque is not an option, I’m going for the salad ever time. But in the spirit of Bourdain, I know the importance of getting out of your palatable comfort zone, and trying something new. This soup is phenomenal! It’s really a meal….no doubt! www.india-oven.com

Macarios Grill-Indio- It is a local treasure kind of place off of Indio Blvd, in a converted house with a dirt parking lot, and the food is sensational! Macarios is actually big on seafood beside authentic Mexican food, and specializes in different dishes of the deep. A fave of mine is their Chiles Gueritos, an out of the box dish that would easily be featured on one of Bourdain’s show. They are yellow peppers stuffed with seasoned octopus and shrimp, topped with melted jack cheese, with a side of Soy Sauce. The first time that my boyfriend and I tried them, we didn’t know what the soy sauce was for, and actually thought strangely enough that it was balsamic vinegar. But after ordering it over and over again, and noticing the sauce kept showing up, we thought that perhaps the chef knew better than us and that we should tried it on the dish. It was ridiculously good with the soy sauce, and we wondered what the hell we were thinking by questioning it before. It’s all part of trusting the culture of the cuisine that you are trying and just go going for it. Yet another Bourdain lesson. www.macariosgrill.com 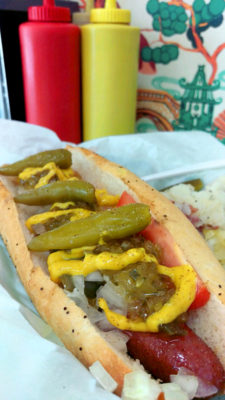 Frankinbun-Palm Springs- When I heard of a place in the desert that specialized in tubed meat, I was excited and somewhat pissed off that I had not known about it before, as my hot dog cravings had been left unsatisfied ever since the hot dog lady at Lowes in La Quinta closed down. I mean really? But it didn’t matter any longer, as my cravings would soon be sated. The teeny spot has big sausages, and outstanding Detroit style chili, some of the best chili that I have ever tasted! As Bourdain would often emphasize, it sometimes the simplest foods that can bring a heightened level of happiness. Upon entering Frankinbun, I immediately ordered the Chicago Dog, as it has become my fave ever since trying it in the windy city itself. The creation had all of the elements, the juicy sausage, pickle spear, tomato, pepper, onions, celery salt, mustard, relish and fresh bun all attended my party. Simply Frankintastic! www.frankinbun.com

Counter Reformation-Palm Springs- I love everything about this place. I mean, I really love it. From it’s clandestine, speakeasy ambience, to the small plate options, head scratching affordable wine offerings and personal service, Counter Reformation needs an adjective all of its own. Located inside the Parker Hotel in Palm Springs, one can already establish some high expectations, which will be delivered in every way. The counter only dwelling flourishes in its intimacy with its guests, offering an experience like no other in the Coachella Valley. When I reviewed the restaurant, I was treated with extraordinary accommodation by Kathleen Brown, who runs the kitchen there, and the other attentive staff members. They, along with the insanely incredible food, made me put Counter Reformation high on the pedestal of desert restaurants. It is there where I tried the creation that had lured me there in the first place, the Foie Gras Macaron (Foie Gras mousse, loosely sprinkled with truffle chimichurri). It is fitting that I close my tribute to Anthony Bourdain with this exceptionally cruel confection, as I started with Foie Gras at La Brasserie and will end with it. He often featured the delicacy on a myriad of his shows, and I would be glued to the screen every time. The Foie Gras Macaron at Counter Reformation paired perfectly with Charles de Cazonove Champagne, as I came to find out by the suggestion of Shavonne, one of the uber knowledgeable counter attendants. I indeed found foodie salvation at Counter Reformation. www.theparkerpalmsprings.com

If there is anything to be learned or is positive about this tragedy, is that we as a society are coming to understand that we need to be more aware of the mental state of our loved ones, our friends and family who may need help, but don’t know how to seek it and are too embarrassed to ask for it. It is imperative that we listen!! Although I didn’t have the pleasure of knowing Anthony Bourdain, his death for some reason seems personal. I wish I could have helped, and that he knew how much he had influenced me and millions of others for the better, how much that he meant to us. Maybe that would have made a difference.

This local foodie will forever be grateful for what he has taught me through his shows. I will continue to explore food with zeal, and travel with an open heart and mind. And to add some more Pixar positivity, as Anton Vigo, the food critic from Ratatouille said, “He has left me wanting more.”

“Move. As far as you can, as much as you can. Across the ocean, or simply across the river. Walk in someone else’s shoes or at least eat their food. Open your mind, get up off the couch, move” –Anthony Bourdain