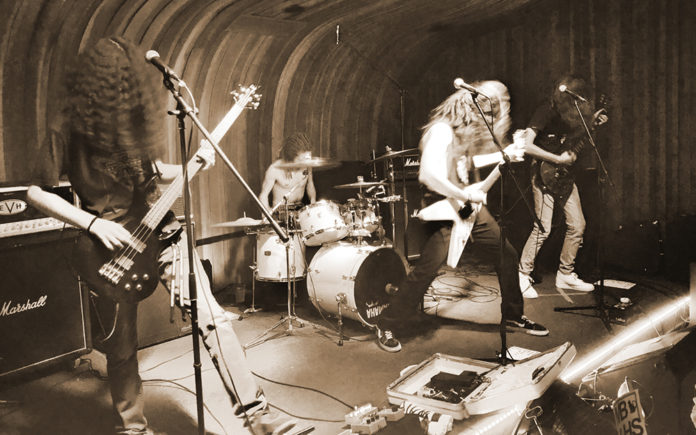 With two of its members having graduated last year and the remaining two now seniors at La Quinta High School, metal champions Instigator are becoming more experienced in both life and music. CV Weekly spent a late afternoon with Mark Wadlund, (lead guitar and vocals), Jaxon Fischer (rhythm guitar and vocals), Garrison Calkins (bass) and Joe Boomer (drums) at The Coffee Bean and Tea Leaf in La Quinta to discuss their forward march.

On November 10, 2018 Instigator will be performing at STICKY FEST at The Palms located at 83131 Amboy Road in 29 Palms with Throw the Goat, Sticky Doll, Sleazy Cortez, Brain Vat, Mega Sun, Aboleth, The Wastedeads, Generic Response, Karr, Drop Mob, Ormus, The DirtBays, Satanic Johnny and UU. The outdoor Punk/Metal/Alt music event is all ages and offers free camping. Tickets can be purchased for $12 online or $15 at the door. Military and children under 16 with parent receive free admission with identification. You can purchase tickets now at accelevents.com. Read the interview here:

The rundown on Instigator:

“We’re in the writing phase right now to put out some new material. We have a lot of upcoming shows with bigger acts. We’re excited. We have a decent show now. The songs flow better. The energy is becoming bigger in our shows. We have people slam dancing and moshing. People are starting to get more energized.”

On the Instigator sound:

“We’re becoming very practiced and articulate. Our music is aggressive, fun and complex. We play a lot more tighter live. We’re getting better with every show. Our tone is a lot better. We know how to dial in the tones so that we complement each other better.”

On how they have changed impressions about metal:

“Some of our family members didn’t even like metal then we started playing. We’ve changed opinions about metal. We’ve ‘instigated’ people’s perceptions in how they view metal and in a broader perspective. You just have to get in front of these Marshall cabinets.

Most of our lyrics are dedicated to enlightening others on crime, corrupted leadership, and other topics, it’s gnarly.”

On what separates Instigator:

“We have a range of influences that inspire each and every one of us. We contribute a lot of music to each other and what we listen to. We have changed each other’s playlists. We listen to all kinds of metal and all of that goes in consciously and subconsciously into what we play.

Blues is a big part of what we do because of the feelings and the rhythms. A lot of what separates us is the guitar work, drums and rhythms. It’s technical metal. The chemistry of the band is always there. We’re all musicians at heart. We all grew up with music, listening to music and practicing our instruments. We got together and developed a bond.”

On participating in STICKY FEST:

“Greg Gendron is putting a lot of bands together throwing an all day festival that is really opening the entire sphere of the desert rock scene.”

On the mobilizing the metal movement: 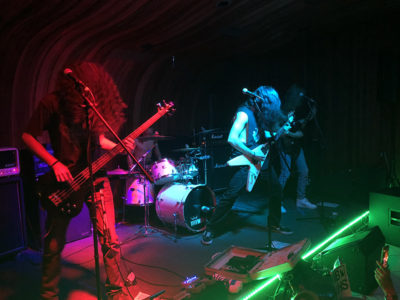 “It’s in our name. We have ‘instigated’ the movement. We are the future of this metal scene out here and our generation is not yet complete but we don’t necessarily fit in. You listen to pop songs now and they glamorize drugs, sex and money and all you hear about is how cool this guy is and how many clubs and parties he goes to. You can get a history lesson out of a metal song.

We want our music to be an audio representation of a piece of art. If they listen to our music and lyrics and apply the ones that are important to them that’s the point. We can help others be intuitive.”

“We met Brian earlier this year. Recording Built To Defy would not have been possible without Brian. He was such a character to us as well as the rest of the Throw The Goat. Puke has been an older brother kind of mentor. I don’t know why they were ever so cool with us. They are so creatively punk. You can tell by just looking at them. They represent that rock and roll attitude, like no compromise, they don’t’ give a shit.”

“I first saw Instigator perform last year at the Date Shed, opening for Nick Oliveri’s band Mondo Generator. They really brought down the house; great performance. They were just an instrumental band at the time, but you could tell there was tons of potential. What these guys lack in age they more than make up for in musicianship.

The guys were a pleasure to work with. We started recording around this time last year. They all spent the weekend at my place and we got virtually everything down in just the first two days. I was kind of surprised that the band’s parents were all okay with their kids staying up in Idyllwild at a dude’s house that they’d barely met once. The boys came up a few times after to track more instruments and do their vocals.

Anyway, things got a little hectic in the studio when we started recording the new TTG album in October, then I started tracking the 5th Town album right after. Plus, before any of that, I’d been working on finishing an album for local Idyllwild super group, Johnny & The Competition, which came out in November of last year. Then the TTG album came out in January and by early March we finally got the last of the vocals tracked for Instigator. I started sending off mixes to them after that, then getting notes back and adjusting accordingly. All the while, the Instigator guys never complained once and they were super stoked on the results. It was a lot of fun working on Built To Defy, and I think they’d all agree.”

You can pre-order BUILT TO DEFY from https://instigatorusa.bandcamp.com/ in either digital or CD format.