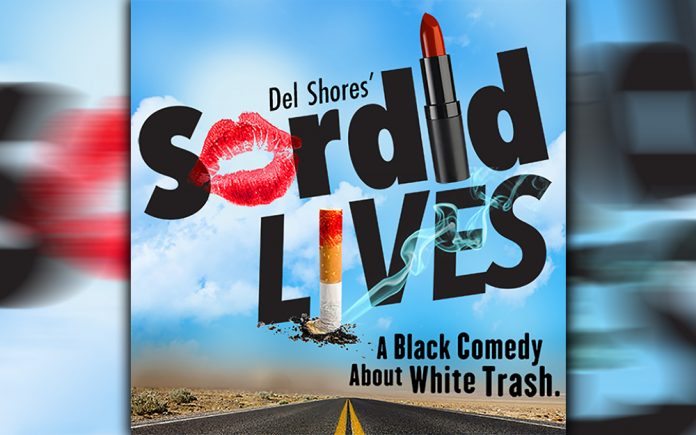 1996 was a memorable year for the American LGBTQ community.  The Defense of Marriage Act (DOMA) was passed.  DOMA was a federal law that defined marriage for federal purposes as the union of one man and one woman, and allowed states to refuse to recognize same-sex marriages granted under the laws of other states. The result was a great inhibitor of civil rights.

Premiering on May 11, 1996 in Los Angeles, Sordid Lives, was Shores’ fourth play, it opened in Los Angeles in 1996 and ran for 13 sold-out months. The play went on to win 14 Drama-Logue Theatre Awards, including three for Shores for writing, directing and producing. There have since been over 300 additional stage productions of the play. It has become a cult classic in the LGBTQ community and became a film in 2000 and a TV series produced by Logo, in 2008.

The latest incarnation of this classic show is now running as a part of the 25th Anniversary season of the Palm Canyon Theatre.   Sordid Lives, is the tale of a southern Texas family who has just lost their matriarch, Peggy, in a ‘sordid’ kind of way and as family and friends come together in their grieving and funeral preparations, closet doors are kicked open, and dirty secrets are left bare.  Described as “A black comedy about white trash,” it’s a fitting description for this moving and uplifting story.

The first wonderful surprise of the performance was Francesca Amari, as Bitsy Mae Harling, a singer with a ‘reputation.’ I’ve long been a fan of Amari’s talent, and I did not initially recognize her as she made her way down the theatre aisle singing the opening tune,

Amari, opened the gates for a flood of talent who fills the stage with fun and mesmerizing performances.  Ty Williamson, (Cameron Keys) is the narrator, telling his 27th therapist about his family’s antics and building up the courage to finally come out of the closet.  Keys, is a talented young actor, charming, handsome and the perfect fit for the only seemingly normal person in this cacophony of dysfunction. Judith Chapman, brings her incomparable skills and comedy chops to the show as Latrelle Williamson, Ty’s mother, and a proper (tight-ass,) southern woman who must cope with the embarring death of her mother, contend with her sister, LaVonda, ( Tiffani LoBue,) who has decided to reenact scenes from ‘Thelma and Louise,’ right before the funeral, and a son who has come home to bare his soul.  With her usual aplomb, Chapman rocks this performance.

Michele Davis, portrays Sissy Hicky, Peggy’s sister and Latrelle and LaVonda’s aunt.   As someone who has been through the process of quitting smoking, the opening scene with her quitting efforts especially resonated and made me laugh out loud. Shores’ dialogue gives Sissy some of the best one-liners, (“Good Lord, Latrelle. Don’t you know better than to sneak up on someone when they’re talking to a corpse?”)

A seriously stand-out performance, was Michael Hadley’s, Earl, “Brother Boy,” Ingram.  Not since Leslie Jordan, who originated the role, have I seen an actor present this character with such authenticity.  I cracked up, I teared up and was completely mesmerized by Hadley’s moving presentation of a character who has been mistreated his whole life and yet manages to find his own humanity.

SE Layne (as Dr. Eve Bollinger, the woman you love to hate,) took on a role that was not a lead, and made it one of the most memorable characters in the show. Layne, also directed this production and delivers a show with spot on comedic timing, belly laughs and top-notch audience engagement. (baggies filled with tissues, rubberbands and valium (fake,) are handed out upon entry into the theatre.)

David Brooks, (Wardell “Bubba” Owens,) and Morgana Corelli (Juanita,) are always two favorite performers of mine. I enjoy them in everything they do.  Richard Marlow as G.W. Nethercott, Laurie Holmes as Noletta Nethercott and Nick Edwards as Odell Owens, round out this stellar cast.

Though the 1998 (circa 1958) story comes across as a bit dated in places, Shores’ script is fun, moving and heartwarming.  His characters are dysfunctional as hell, but lovable and this production does great justice to a show that is beloved by audiences across the country.