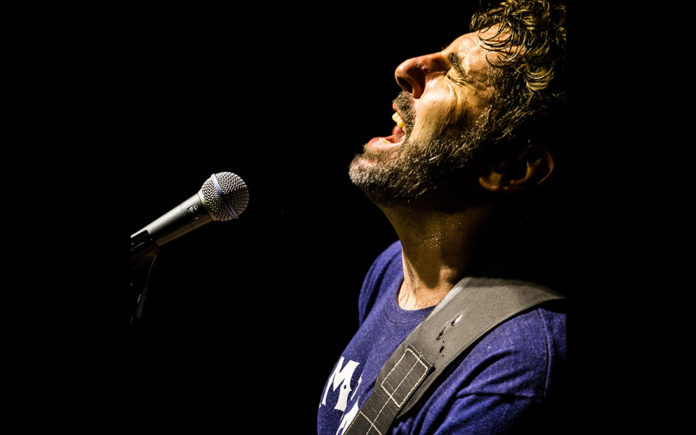 Jonah Matranga is a singer, songwriter, guitarist and author who has flourished as an independent artist. His bands Far, onelinedrawing, New End Original and Gratitude have been the vessels to transport him to his ubiquitous and unequaled solo work.

Far’s release Water & Solutions (1998) was an album that Alternative Press magazine named as one of the most influential records of 1998.

Matranga will headline the Brew Pub Stage on Friday, August 16, 2019 at 10 p.m. at the 2nd Annual Idyllwild Strong Benefit Festival.

Coachella Valley Weekly communicated with featured artist Matranga about what he’s been up to and his participation in the event.

On His Involvement with the 2nd Annual Idyllwild Strong Benefit Festival

“I have always made it clear that I want my music to be involved in things larger than music, so when someone called and asked me to be a part of this, I was really happy to say ‘yes’.”

On His Approach to His Wide-ranging and Thoughtful Music

“A long time ago, one of my favorite people ever said, ‘be serious enough to have fun’. I have pretty much lived by that since then, and that has guided my musical wandering as well. I really just want to write and sing things that make me feel like I’m 14, playing Zeppelin covers in the basement with my friends. It really is that simple, and I just keep following that idea. And it keeps working out.”

“That was one of my favorite shows ever, because it was just a bunch of incredibly loud Hardcore bands and me, and we had such a blast. I’ve always felt at home in the Punk/Hardcore community, and I’m grateful for it.”

On the Motivation for HIs Book Alone: 23 Years of Fatherhood & Music

“The impetus for writing the book was to tell the story as best I could, so that my daughter and the rest of my family and anyone that ever cared about the music will always have it. It was an incredibly challenging, emotional, and satisfying experience to write it.”

On the Status of His Band Far?

“All the guys in Far are doing their own thing, they will be family for life, we went through everything together. If we ever play together again it will be because it feels fun, plain and simple.”

On His Solo Tour and the ‘On the Road’ Environment

“There is a lot about touring and the music industry that I really don’t enjoy, and again, I’ve just kept editing that part out and focusing on the fun parts, and it’s led to where I’m at right now. I really like playing in people’s homes more than regular clubs these days, and so if I play a club, I just want to make it feel like a home. It’s fun to try.”

On Where He Goes from Here

“Since I’ve been focusing on writing the book for the past bunch of years, a lot of songs have built up, and I’ve got to figure out fun ways to release them. After I get done with these tours, that’s going to be my focus. We’ll see what happens.”

“Just thank you, sincerely. I never take it for granted when someone wants to talk to me about the music. It’s been the only job I’ve really ever had, and I’m forever grateful to everyone and everything that helped me along. Including this very conversation. See you at the show, hope we help some people and have fun doing it. That’s what music is for. Take care.”