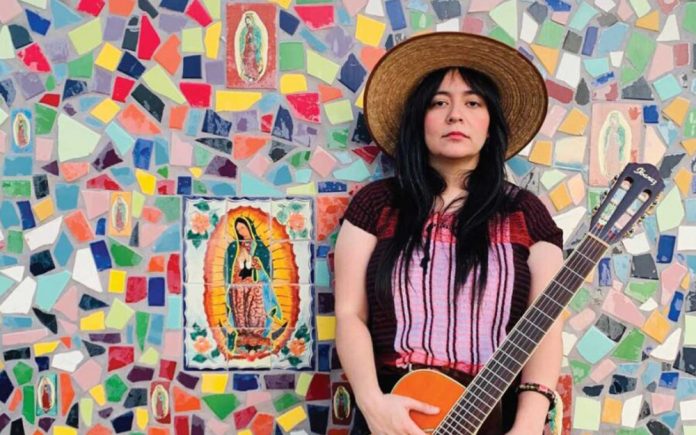 Coming off of two solid shows at Coachella Valley Music and Arts Festival, desert darling Giselle Woo heads to two more local stages as Joshua Tree Music Festival and Oasis Music Festival welcome her passion and joy to perform once again. I was able to catch up with Giselle by phone and chat about her recent success. She was learning a bit more about the business of being a musician and appreciating the process of learning. Luckily, she says, she “likes to learn sh!t.” A self-proclaimed “forever student” at COD, she is grateful to have access to classes and teachers to help her learn and grow.

“It felt amazing,” she says of her back to back Coachella shows. “We had artist parking passes!” When she looked out and saw the size of the growing crowd, she thought her eyes were playing tricks on her. “After two years, we were the first band to play Coachella. The first band,” The moment weighs significant. “We got the whole fest to rock out! There were a lot of people there for the first day. We were able to have Bryanna Evaro as our manager and handle all the things we normally do ourselves. Having a team to help us was really nice. Being able to cross load and having a guitar tech, and all the support allowed us to really enjoy the show. We even had a trailer with AC and a shower!” She says the best moment for her was having her father come on stage and play with her and inviting her mom up later as well. “They were the ones that let me flourish, in church and music. I mimicked them. My mom is so amicable and my dad is so approachable. They do what they love with passion and joy and I try my best to do the same.” Pride and respect fill her voice. “I felt like I owed them and thank my band for letting my dad play a song with me.”

Giselle says she and her bandmates learned a lot from the Coachella experience and gained a lot from the process from creating a stage plot to sound check. “The more prepared you are, the better it is for everyone that has a job to do to make your performance shine. I have a lot of respect for the process.” One of her favorite performances was Karol G. “Her tribute to the number one Latin Hits, starting with Ricky Martin in 1998, all the way to now was incredible! It made me cry.”

Now as she turns her attention to Joshua Tree, Giselle reflects on the differences between the experiences as she returns to the calmer arena she first entered with her band back in 2018. “It will just be me, by myself as a part of a singer-songwriter thing.” She says it’s a reflective moment for her as she thinks about how far she has come in her journey. “It’s a reminder for me about where I have gotten to. I think about where I would be if I never picked up a guitar or wrote songs. There’s a lot I wouldn’t have experienced,” she ponders her growth and her journey. “I met Jose and Marco (Drummer, Bassist) and we played Joshua Tree (Music Festival) in 2018. It was our first big gig. We played for 90 minutes! We prepared a lot for that show.” Giselle Woo will bring her signature smile and songs to the Songwriter Sessions on May 12th from 12:30-2 pm. For more info go to: https://joshuatreemusicfestival.com/may-2022-schedules