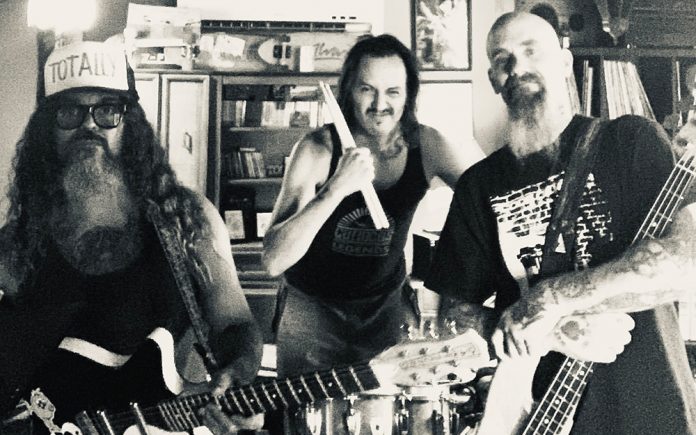 As published in Joshua Tree Voice/JoshuaTreeVoice.com in partnership

There ought to be a Steven King novel-turned-movie about this group of teenage boys growing up in a desert town with a population of little over 11,000. It would read like a Standby Me, Dream Catchers mashup. Except this story is real. 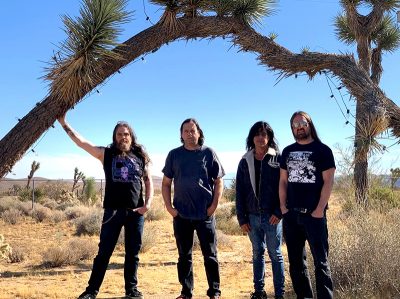 Nick Oliveri: “I’ll never forget that day – my first musical conversation. It was at Brant’s (Bjork) house, him on drums, Josh (Homme) on guitar and Chris Cockrell on bass. John (Garcia) didn’t show up at first and came in late. I’d already sung with them. I showed up with “New Rose” by The Damned, “I Don’t Care” by the Ramones, and “She” by Misfits. I had showed up with some covers I wanted to play, and Josh and Brant had 2 or 3 originals. They maybe weren’t the greatest songs, but I still remember them to this day. They were catchy, and they didn’t suck. Brant had a really long one called ‘Communion Youth’. It was 1987. They were 12. John and I were around 14 and 15 at the time. We played a party for Chris Baker with Sean Wheeler’s band. We were pretty much the first version of Kyuss. I played two parties with them before leaving the band. They asked me back to play bass, about a year or two later, and that’s when I became a bass player.”

Meanwhile, stuck back in the underdeveloped La Quinta cove, a small gathering of friends, bonded by their passion for the hard-core punk scene began to jam at their house.

Gary Arce: “We were hardcore punk kids in the early 80s, going to LA, watching Bad Brains, Discharge and DOA, and all the hard-core bands that were touring back then. For us the hardcore punk scene ended in ’84. All the bands we liked stopped touring and we got bored with it. So, we just started jamming and playing guitar. We weren’t really influenced by anything. We were influenced by God, and by what we liked. I started liking a lot of other musicians in jazz, like Coltrane, and everything really. My style evolved out of a mish mash of different kinds of world music – whatever I felt.”

“I lived with Mario (Lalli), our drummer, and a couple of other friends. Me and our drummer weren’t working. We’d wake up at 9 am and start drinking beer; we were just bored. We’d start playing music, just guitar and drums. I started honing my sound off that. I wrote a lot of the music just like that, without a bass player. That’s how come you get this sound from Yawning Man that is so unorthodox. We played like that for 6 months. Finally, I said, ‘Hey Mario, we need a bass player.’ And that was pretty much it. Next thing we’re playing out in the middle of the desert with a generator. Our last generator party was at Edom Hill.”

Brant Bjork: “Yawning Man was the sickest desert band of all time. You’d just be up there in the desert, everybody’d just be hanging, partying. And they’d show up in their van and just, mellow, drag out their shit and set up right about the time the sun was goin’ down, set up the generators, sometimes they’d just go up there and drink beers and barbecue. Sometimes it would be a scene; sometimes it would be very intimate. It was very casual and loose, and while they were playing, everyone would just lounge around. They were kinda like a house band. It wasn’t militant like Black Flag. It was very drugged, very stone-y, very mystical. Everyone’s just tripping, and they’re just playing away, for hours. They were the best band I’d ever seen.” *The Yawning Man song “Catamaran” was recorded by the world renowned, hard, desert rock band Kyuss (thanks, in part, to Bjork’s love for the band), putting the band on the world music map. The first full length LP from Yawning Man, Rock Formations, released in 2006, came almost 20 years after the band’s organic beginnings

The music these kids would make, and the ripple effect it would have on the sound waves of rock and roll on an international level could not have been foreseen. Once they got their first taste of rock and roll, they fell on the sword hard. There was never a plan b. The amount of shit they went through, together, apart, together again, never together again, would have broken weaker men. Considered demi-gods in Germany and Europe, they have experienced near obscurity in their hometown; they never quite fit their own hometown’s demo. They have fought dragons, in isolated darkness and on public display. They have bled for this.

The creative force born from these things is only lost on the mentally deaf. Awe-Bar is showcasing these desert rock legends in their current projects. Kudos to them. If you don’t already have your tickets to this show, then maybe rock and roll isn’t for you. There’s probably a Taylor Swift docuseries on Netflix calling your name.

Mario Lalli: “I am so excited about this show and about this new venue, a venue that nurtures the local music scene, gets behind it and supports its creative growth. It is special. It inspires. Since we opened our club, Rhythm and Brews, in the early 90’s, there’s only been one or two venues that truly invested in that vision. This show is a perfect celebration of that … all these guys are from here, and grew musically from desert roots. All the musicians playing this show have been making noise together for 25 plus years, in one way or another.” 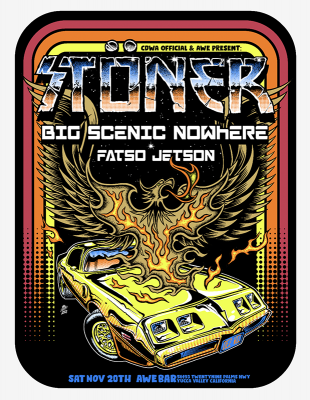 BIG SCENIC NOWHERE (World Debut): Gary Arce (Yawning Man), Bob Balch (Fu Manchu), Tony Reed (Mos Generator), Bill Stinson (Yawning Man). Formed in 2019 by Gary Arce of Yawning Man and Bob Balch of Fu Manchu, the music perfectly reflects the musical bromance between each of the representing bands: Yawning Man’s covetable, lonely Pink Floydian guitar wails, partnered with the intensity of the heavy Bos Generator darkness, infused with Fu Manchu’s eternal punk rock heart, had talent buyers on the phone booking them on tours, pre-pandemic. This is going to be one hell of a thing to hear live for the first time.

FATSO JETSON: In 1994, Mario and Larry Lalli opened the desert’s first “rock club,” Rhythm & Brews. It was at this club that the three decided to form a band. They played their first show in September 1994, opening for former Black Flag guitarist, Greg Ginn. Ginn released an album with the band on his label, SST Records. The band then went on to play as many shows as possible including a small 6 show tour with fellow desert dwellers Kyuss. Bjork played rhythm guitar with them for a short stint. In August 1998, Gary Arce joined the band as a rhythm guitarist for a tour up the coast with Queens of the Stone Age until 2000. The band continues today as a four piece, adding Vince Meghrouni on the saxophone and harmonica, and Mario’s insanely talented son, Dino, joining them in leu of Larry Lalli.

Joshua Tree Voice, Publisher’s Note: Some of the quotes in this article are excerpts from interviews and articles I have written for Coachella Valley Weekly over the past 9 years. You can find them in the Coachella Valley Weekly archives under their titles: Half Astro, Dali’s Lama and Yawning Man ~ Desert Rock Roots, April 3, 2013; Gary Arce & Yawning Man, August 28, 2013; Front Porch Conversations with World Renowned Rocker, Nick Oliveri, October 8, 2014; Nick Oliveri’s Uncontrollable Hometown “Pre-Queens of the Stone Age Reunion” Concert, October 22, 2014; CV Music Awards 2016-Gary Arce 2016 “Trailblazer Award,” May 2016; Fatso Jetson’s Not So “Idle Hands,” November 9, 2016.