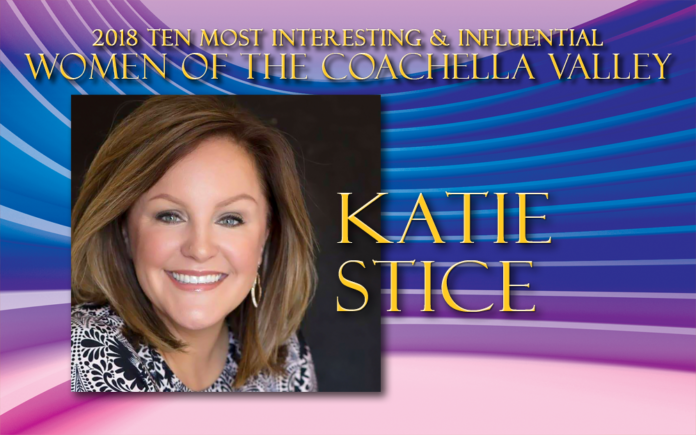 Katie Slimko-Stice IOM, ACE, has always been dedicated to her community. Through her work with the Children’s Discovery Museum of the Desert, the Palm Desert Chamber of Commerce and now as the Chief of Staff at the Greater Coachella Valley Chamber of Commerce, community has truly been her focus.

Stice arrived in the Coachella Valley via San Diego in 1993, just in time to finish out her high school years at Indio High, and took pride in being a Rajah! She quickly became involved in the desert community, which thwarted her thoughts of someday returning to San Diego. While attending College of the Desert, she realized her passion in working with children as she became involved with them at the YMCA. It would turn out to be the prelude to her path at the Children’s Discovery Museum of the Desert.

It was there at CDMoD, where she could implement what she saw as a need for children’s services in the desert, “There was not much to do in the desert back then. I felt like families needed support and I absolutely loved doing it,” said Stice. She served as the Operational Director at the museum where she ran teen programs, camps, the hands-on museum gallery and worked on fundraising events with major donors. Her affinity for the museum is clear, as it remains one of her favorite places in the desert, and one that she holds dear to her heart. 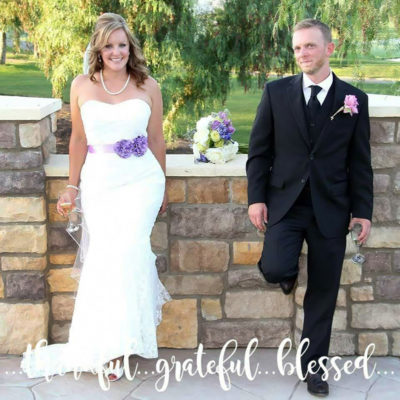 It was through her volunteer work with the Palm Desert Chamber Golf Cart Parade, where she become interested in working for the chamber. After a couple of years of volunteering, Stice began working for them in 2007. Although during that time the economy had challenges, Stice saw it as an opportunity to rise above it and to make the Palm Desert Chamber of Commerce the best that it could be and to provide businesses better value. The work of the chamber team paid off as they earned a 5 Star Accreditation two times over, and the executive staff  became certified with their IOM (Institute for Organization Management) and ACE (Accredited Chamber Executive), which brought the Palm Desert Chamber into the top 1% of the chambers nationwide.

When the Greater Coachella Valley Chamber of Commerce was formed in 2016, Stice left the Palm Desert Chamber to be part of the ground breaking organization, which incorporates the chambers from Cathedral City, La Quinta, Indio and Coachella, as well as the Cabazon Band of Mission Indians and Twenty-Nine Palms Band of Mission Indians, “I was offered a position to again fill a need in our community and help build a regional chamber, it just makes good business sense to merge and connect all of our Members,”  said Stice. The merged chamber combines resources, making them more efficient to serve the business community, bringing the valley together and disintegrating city and neighborhood lines. Her passion for the community shines through her work, as she puts forth her energy to help local businesses thrive. 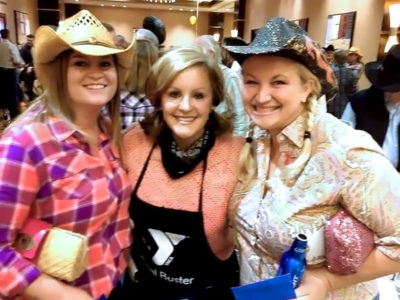 In her personal life, Stice married John Stice in 2013, who is the Food and Beverage Manager at Bellatrix at the Classic Club in Palm Desert. Her husband along with their dog Gill Grissom, bring peace to the hustle and bustle of her daily life, “John supports all of my crazy ideas and numerous work events, he is the best thing to ever happen to me,” says Stice.

For entertainment, Stice’s favorite band is Pearl Jam, her movie choice is Mary Poppins and her top book pick is, The Power of Now.

There are many women who have and continue to inspire Stice, which include her moms and sisters, Saundra Straight, Marla Markes Slimko, Julia Cavin, Betty Slimko, and Anne Ebert. She is blessed to have their love and support and grateful for how the have helped to mold her into the person that she is today. She is also grateful for her sister-in-law Sara Stice, who recently passed away, noting that she was both the kindest and bravest person that she has ever met. Barbara deBoom, IOM, ACE, who served as the President and CEO of the Palm Desert Chamber was Stice’s leader and continued mentor, “Her support and guidance is everything to me,” says Stice. She also gives thanks to Heidi McArthur, owner of Jadabugs Kids Boutique in La Quinta and Rancho Mirage and a member of GCVCC, “Heidi is always lifting up other women and families in the community,” said Stice. McArthur also runs a Facebook Group called: Real Moms of the Coachella Valley. And Cindy Burreson, of the Renaissance Indian Wells Resort and Spa, and a GCVCC Board member, is also a source of inspiration for Stice, “Cindy is one of the most positive people that I have ever met. She shares her light with her community and reflects the light of others as well,” says Stice.

It may seem that being in the public eye and touching the community the way that she does, that Stice would be the ultimate extrovert, but indeed that is not the case, and something that would surprise people about her, “If it weren’t for my job, I would not be in the public eye as much as I am. I am actually pretty awkward and am a total unintentional comedian,” admits Stice. 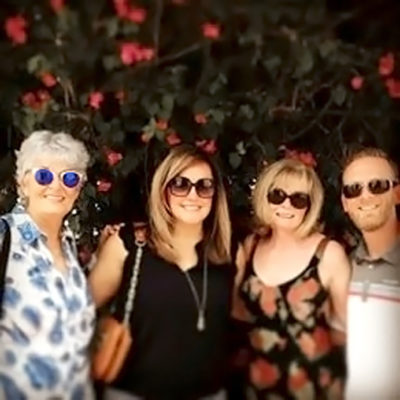 For Stice, living in daily gratitude is part of her being. As she has seen the darker side of life before moving to the Coachella Valley, when her and her mother and sister lived in a battered women’s shelter in San Diego as a result of an abusive step-father, “I am so grateful for the people at the shelter that helped us. I guess that is a reason why I always want to give back, because I was on the receiving end,” said Stice. She is grateful for everything, therefore she is always happy. As one of her favorite mantras states, “Gratitude unlocks the fullness of life.”

Stice is a cherished member of our desert community, with her goal of bringing local businesses to the forefront and aiding in their success, as well as her passion for working for the betterment of children through the Children’s Discovery Museum of the Desert. Her bright spirit continues to inspire us all.  She will be representing Children’s Discovery Museum of the Desert as her charity at the event because she believes that “children are our greatest natural resource. Let’s invest in their futures – you will never regret it.”