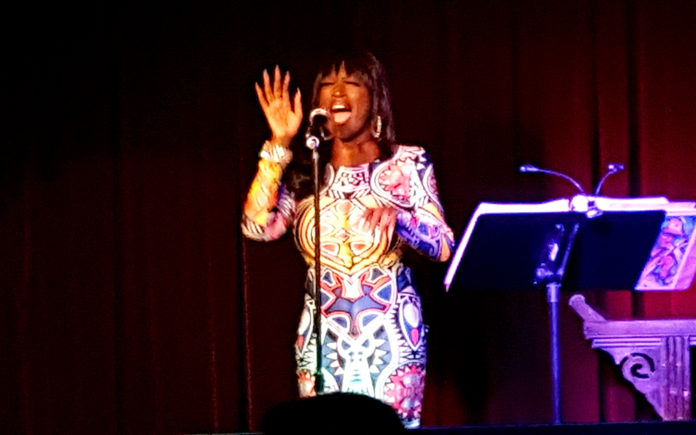 The definition of music is described as vocal and/or instrumental sounds that are combined in such a way as to produce beauty of form, harmony, and expression of emotion.  No other artist personifies the essence of this definition like Singer/Actress Keisha D.  She finds her inspiration from the greats like Ella Fitzgerald, Mahalia Jackson and Nina Simone. All of whom are powerful, beautiful, talented and inspiring, just like her.

Originally from Los Angeles, Keisha gave her first solo concert at the age of fourteen.  After an initial bout of stage freight and strong encouragement from her mother, she went on to receive a standing ovation and came to believe that, “God had a plan for her in music.”  She has been a beautiful force of nature since that realization.  After moving to the desert in 2004, she responded to an open call for vocals at the McCallum Theatre, won for Best Vocals and kicked off her incredible performing career.

My initial introduction to the talented Kiesha D, was in 2014 when she beautifully portrayed the Fairy Godmother, in Palm Canyon Theatre’s production of Rodger’s and Hammerstein’s “Cinderella.”   In 2015 and 2016 when I was looking to cast for a show that I had created called, “Conversations with…” she brought her incredible stage skills to her portrayal of the iconic Congresswoman, Shirley Chisholm.   In 2018 we had the chance to work together again when she performed in a production of “The Vagina Monologues,” that I produced and directed for national V-Day.  Yet in addition to her acting talent, she is most recognized as one of the greatest singers to grace a stage.

While experiencing her show at Wangs In the Desert, on Saturday night, I was once more reminded why this woman is recognized as a world class artist. From Rock in Roll to the blues and some jazz for good measure, her show included hits ranging from Bessie Smith to Stevie Nicks.  I was mesmerized by her voice and her engaging stage persona. She truly does tell a story when she sings a song. Her connection with the audience is a reflection of the fact that she is genuinely one of the nicest people you will ever meet.

So, it naturally follows that not only does Keisha D give generously to her audience, but to the community, as well.  She has established the Keisha D Music Scholarship through the PSUSD Foundation. Every year a college bound senior has the opportunity to apply for funds towards their education. To donate to the scholarship folks can go to the PSUSD website. PSUSD.org.

Her tireless dedication to her music has her engagement in non-stop performances exemplifies that she is truly the heart of the desert!

An event not to miss is “Jazzville,” October 16, 7:00pm at Wangs In the Desert, 424 S. Indian Canyon Dr.  This is a fundraiser for Keisha D’s Star on the Palm Springs Walk of Stars.

Tickets can be purchased at jazzvillepalmsprings.com.

No one deserves this Star recognition more than Keisha D!