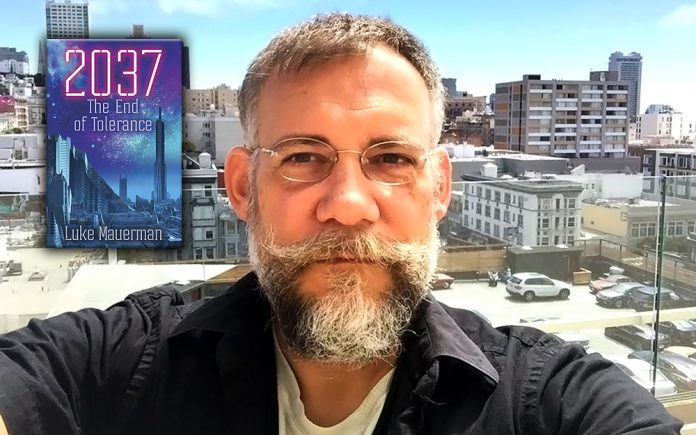 Many folks were stunned when Trump was elected in 2016.  It was a shock that a reality TV star could actually become Commander in Chief.   Now, the reality of his Presidency has set in and the country faces monumental challenges to its democracy.  In Luke Maureman’s debut novel 2037 The End of Tolerance (Beekman Place, 237 pages) human rights and a sustainable planet may not have a future.

Stephe Stafford is 14 years old when an earthquake devastates San Francisco.  Both his parents are killed and his aunt comes to live with him.  It’s 2020.  As Stephe copes with the loss of his folks, he also struggles with his sexuality.  He’s gay and longs to connect with someone.

But it’s not safe to be gay anymore and he’s afraid to come out.  After being beaten in the park because he may be a homosexual, Stephe tell his family.   They already know, which surprises Stephe.

As Stephe comes of age and explores his sexuality, he finds lovers and like-minded people.   He is inspired to become a journalist.  After college, Stephe gets a job and writes about the conservative Supreme Court rolling back the rights of the LGBTQ.  More and more states have not only banned gay marriage they have made being LGBTQ illegal.  While reporting a story in the South, Stephe is picked up and held in a detention center.

Meanwhile, China, Russia, India have become the economic powers of the world.  Technology has advanced, Mars and the moon have become colonies for the rich.

As the US continues to spiral out of control and the planet is further exploited, Stephe is offered a job he cannot refuse.  He is hired by the moon’s plutocrats to prepare and report about the upcoming “first contact.”   Human beings and the earth itself is at risk and there are extraterrestrials watching!

Stephe must first convince the “outer worlds” that humans are worth saving and then hope the people of Earth want saving.

This is an intelligent and thoughtful look into the future.  Through Stephe’s life, the reader gets to experience the horror and the heartbreak as civil liberties and human rights are denied and revoked.  The environmental crisis continues to ebb and flow causing mass evacuations, crop damage and refugee camps.  These events are part of Stephe’s everyday life as he reaches adulthood.

Author Mauerman has a good ear for dialogue, his writing style flows and he is never heavy handed or preachy.  He sticks to Stephe’s narrative.

The San Francisco setting is almost a character in the story and Mauerman does not shy away from sex scenes.

I especially appreciate that Mauerman uses the backdrop of the current administration and political climate to begin Stephe’s story.  Stephe is too young to vote in the 2020 election, yet he pays dearly during Trumps’ second term and the subsequent conservative right Presidents who follow.

The ending is provocative and perfectly ambiguous.  When Stephe is chosen to report the facts about life on earth and defend human behavior, he makes a compassionate decision to act on behalf of his fellow human beings.   Believing in a “Grand Society,” he is willing to report the ultimate news story to his fellow Americans in the hopes of a bright and beautiful future – a world made new.

This story made me consider: Is the end of tolerance because humans finally accept life with total universal equality for all living things?  Can the word “tolerance” become an antiquated word from our history’s dark past?  Or, is the end of tolerance, the loss of all human compassion?

We can hope 2037 The End of Tolerance is only a science fiction story something only imagined and not based on any reality.  Orwell’s 1984 was a work of science fiction.   We are already living in the future.   The year 2037 is less than one generation away.   Laws and technology change at a rapid pace.

Human rights and civil liberties – LGBTQ — must be respected, coveted, and protected.  The 2020 Presidential election may be one of the most critical in US history.  Will Trump be tolerated for one more term?