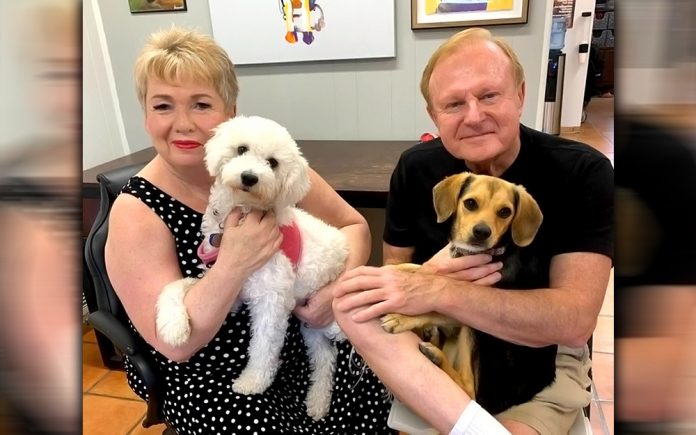 Sometimes a rescue dog orchestrates its own second chance adoption against the odds.  Lily, a stray unclaimed Beagle mix pup, was rescued by Loving All Animals and housed at their Coachella shelter.

Lily waited at the shelter for a home, receiving all her vet work including vaccinations and spaying.  When she was in a yard alone during initial quarantine period, Lily looked forlorn and anxious for canine and human companionship.  She loved visits from the volunteers who would sit with her and start a game of fetch with a tennis ball.  No one called to meet this happy and healthy young 1-year-old pup.  Everyone seemed to want a fluffy poodle type dog, and even the Chihuahuas were adopted before sweet Lily.

Beagles are a breed that love company, be it other dogs or people, and they can bark excessively if left alone too long.  They are brave, intelligent, social, sweet, even tempered, determined, and great with children.  Along with the deep howl associated with hound breeds, they are known for their musical voices and sometimes sing along to outside noises.

On Saturday, June 11, Karen and Russ Bisgaard arrived for their appointment at Loving All Animals to meet small dogs and potential companion to their 1-year-old Maltipoo Lexi.  They previously owned Maltese, Bichons and small poodle breed dogs and were emphatic about choosing one that resembled Lexi.  Lexi was lonely after the couple’s other dog passed away and it was important that she be part of the selection process.

The couple and their dog Lexi met two cute fluffy female pups they spotted on the Loving All Animals website.  Both did fairly well during their meet and greets.  However, it was explained to the Bisgaards that those pups would require assistance from our volunteer dog trainer to address behavior issues.

Russ was emphatic about his preference for a fluffy poodle type dog but did agree to meet Lily.  The smart young dog bounded happily out of her yard, raced into Russ’s arms and gave him a kiss!  Sometimes sealing it with a kiss seals the deal!  She then turned towards Lexi, the two checked each other out and began to play.  We suggested the family spend some time alone to get to know everyone well and talk privately about this important decision.  They were provided with an ample supply of dog toys.

Another amazing thing happened next.  Lily picked up one of the toys and Lexi snarled at her.  Russ verbally reprimanded his dog.  Then Lexi picked up another toy, walked over to Lily and placed it directly in front of her as if to make amends.  The two dogs happily played during the rest of the visit.  Russ and Karen saw the magic between the pair and came to the happy decision to adopt Lily.  Everyone was thrilled!

This dog loving couple explained they had several social events over the weekend.  They did not want to leave a new dog alone so soon and made arrangements to pick her up the following Monday.  Then another amazing thing happened.  Karen called the next day to report that Lexi appeared depressed after expecting her new sister dog to come home with them, texting a photo of her despondent dog.  Karen and Russ cancelled their social engagement and headed for the LAA shelter.  Lexi happily showed her new sister pup around the Bisgaard’s home.

These days the two bonded pups have more toys than you could imagine.  Now Lily and Lexie joyfully share their toys, often holding the same one at the same time.   Karen reports, “We absolutely love Lily!  The dogs are always together, they wrestle and play bite, and chase each other in the yard.  Lexi became stronger and more muscular from all the exercise.  They are the same age, one year old, and the same size.  They always look for each other if separated even for a minute!” 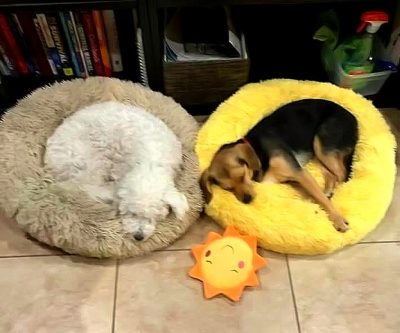 Russ advises us, “When you meet a prospective dog for adoption, you need to sit down on the ground and carefully watch what they do.  Keep an open mind about the breed and type of dog you want.”  Karen adds, “I am so grateful to Loving All Animals.  I tell everyone to contact them if they want to adopt a dog.”  Check out the LAA website for more information, www.lovingallanimals.org.  Like them on Facebook at LOVING ALL ANIMALS INC.

Sometimes fate takes us to pets and to people we might not have initially selected.  Sometimes spending a little time and looking deeper, we get more information to make the best decision.  Often personality wins over a “certain look”.  It’s all about happy endings.  This summer the Bisgaard household is brimming over with joy brought by a small rescue dog named Lily.  No doubt Lily won the adoption lottery with this wonderful home, proving once again that good things come to those who patiently wait.