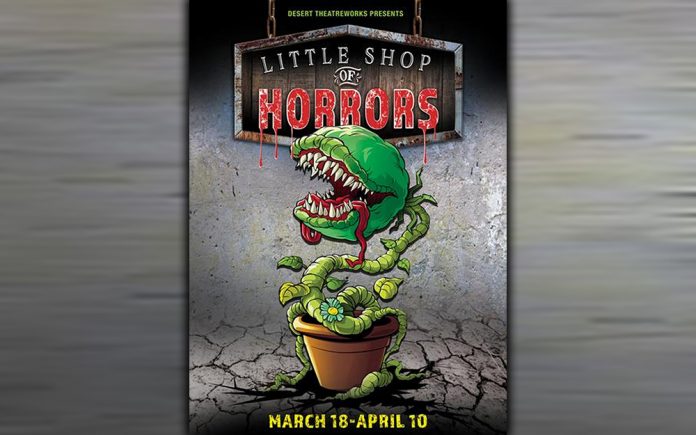 In all honesty, it would never have occurred to me that a Skid Row setting, a woman being subjected to abuse by a sadistic boyfriend and a carnivorous, human blood seeking alien plant, would have the makings of a an outrageously entertaining, sometimes funny and extremely thought-provoking musical.  But Little Shop of Horrors, the hit Broadway musical currently in production with Desert TheatreWorks at the Indio Performing Arts Center, is definitely not your typical show.  And that’s a good thing! 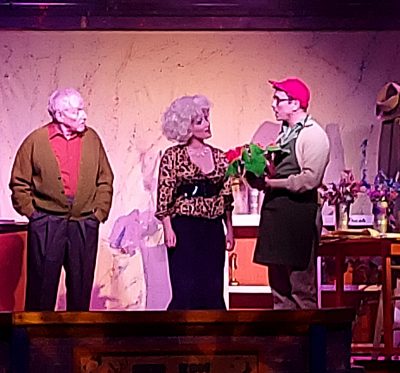 Based on the 1960 cult film of the same name by Roger Corman, Little Shop of Horrors with book and lyrics written by Howard Ashman, and music by Alan Menken, is a singing, dancing, laughing out loud at the absurdities and thought-provoking musical, that will linger in your thoughts long after leaving the theatre.

The show originally opened off-Broadway in 1982 and ran for five years. It was the third-longest running musical and the highest-grossing production in Off-Broadway history. It went to Broadway when it was revived in 2004.

It has had numerous subsequent national and international productions, has been nominated (and won) many awards and was even adapted into a successful 1986 film.

With a background Greek Chorus of street dwellers, Little Shop of Horrors tells a story about the price of fame. Set in a failing little flower shop on Skid Row, orphaned, meek, plant store attendant Seymour, purchases a sickly plant in Chinatown during a solar eclipse. Seymour names the plant Audrey II, in honor of his co-worker Audrey, with whom he as an unrequited love. Seymour then proceeds to nurture the plant, unsuccessfully, until he discovers that Audrey II has a taste for blood.  She’s a man-eating plant that threatens humankind and the world as we know it.  As the plant keeps growing larger, Seymour, becomes a star due to his discovery of this oversize creature, while keeping the plant’s deadly nature a secret. But maintaining fame requires sacrifice, human sacrifice. 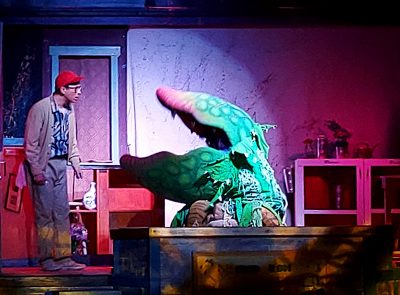 Anthony Nannini, perfectly portrays the love sick Seymour. With a powerhouse singing voice and a superstar talent, Nannini leads this cast with a nerdy charm that allows the audience to forgive all of his homicidal transgressions.  Cydney Krone, as the stereotypical, low-self-esteem Audrey, manages to out-perform the scripted limitations of this character and capture hearts and empathy in her portrayal of a woman dreaming of something better, but not believing she deserves it.  Shel Safir, as Mr. Mushnik, is authentic as the struggling shop owner who knows how to take advantage of a good situation when it presents itself.  And Kellen Green, as the sadistic dentist, has the audience loving to hate him with his narcissistic charm, good looks and fateful demise. The mega talented Ms. Keisha D., is the soulful and brilliant voice of Audrey II.  Jeremiah Garcia, Jessica Schuler, Malcom Stanley and Stephanie Jauregui round out this incredibly talented group of singers and performers. 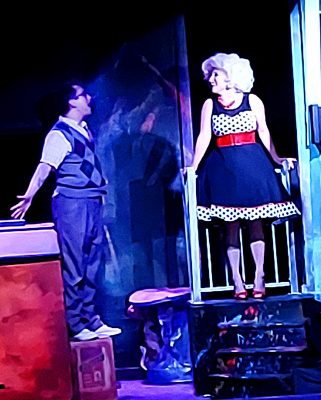 Bravo to Director Richard Marlow, whose staging of this show is captivating and engaging from curtain up to curtain down.  This production team proves exactly why theatre is a collaborative art. Toby Griffin’s set design is creative and eye catching, showcasing each scene with perfection.  Rebecca McWilliams costumes, Violet Feath’s choreography, Jeff Mazer’s sound and lighting, all came together in perfect harmony.

There is a moral to this story, how far is one willing to go to achieve fame and notoriety? And are all ambitions, man-eating plants who demand to be fed on a regular basis?  Go check out this fun and entertaining show for the answers to these soul-searching questions.

The Little Shop of Horrors is running through April 10, 2022, and is highly recommended for audiences of all ages.