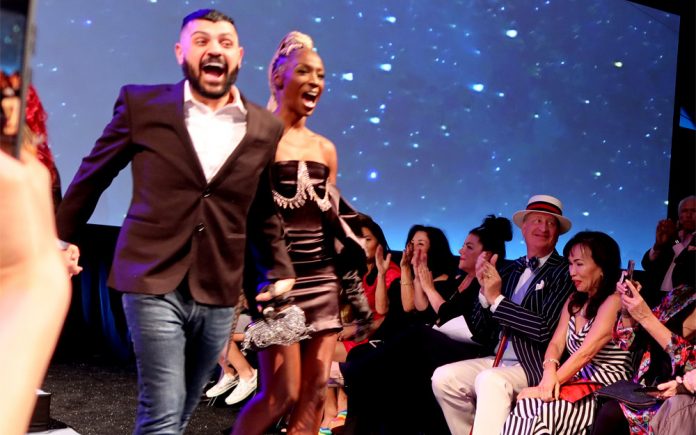 After taking a pandemic hiatus, the cornerstone event of high-end style—Fashion Week El Paseo—has returned in full swing to celebrate 15 years as the West Coast’s largest consumer fashion show. Fashion Week El Paseo will be held on March 19 through 26, at The Gardens on El Paseo in Palm Desert.

This world-class event provides an inspiring, immersive fashion experience and features cocktail receptions, trunk shows, celebrity meet-and-greets, and much more. Highlighting fashion trends and showcasing a who’s-who of the country’s top design talents (including some stars of tomorrow), Fashion Week El Paseo takes one of the world’s most relatable art forms and brings it to the desert in style.

On March 20, Fashion Week favorite and returning designer Michael Costello wowed the audience with his dramatically elegant clothing collection, “Midnight Sahara”. The night started with a cocktail reception at 7:30 p.m., followed by the fashion show at 8:30 p.m. The Michael Costello Pop-Up Store and Trunk Show opened at 9:15 p.m. at the Reception Tent at Fashion Week El Paseo. The pop-up store was free and open to the general public, where Michael Costello presented his collections to peruse and purchase, offering personal consultations.

Michael Costello grew up in Palm Springs, and much of his inspiration comes from the beauty of the surrounding nature. With visions of elegant women draped in flowy fabric and mystical figures roaming through an arid landscape, Costello created a collection that evokes the ultimate desert fantasy. The Midnight Sahara show took the audience into a starlit world of sand dunes that glistens with beautiful beading and sheer illusion.

“I am very much inspired by the desert. In this collection, the colors and movement were also influenced by Egypt. I love the people, culture, and fashion there, and I wanted to create something in tribute to it,” Costello explained in his introduction before the Midnight Sahara fashion show.

Costello started designing clothes at the age of two by drawing dresses on his bedroom walls. At the age of 15, he opened his first store at 286 North Palm Canyon Drive in Palm Springs. It was at his first store in Palm Springs where Costello started making custom pieces for celebrities including Céline Dion, Jennifer Lopez, Toni Braxton, Barry Manilow, Suzanne Somers, Faye Dunaway, Florence Henderson, and more.

Costello later made headlines for designing a matching hat and dress for rapper Cardi B for Paris Fashion Week. Kylie Jenner even wore one of his dresses for her birthday magazine cover and his dresses were featured in Nicki Minaj’s game app, Nicki Minaj: The Empire. He also collaborated with Essie nail polish and designed his own lipstick and eyeshadow shades for Inglot Cosmetics.

Costello garnered nationwide attention in January of 2014 by dressing Beyoncé in a white lace dress for the 56th Annual Grammy Awards. Costello credits that moment as the turning-point of his career. Since then, Costello has continuously dressed her for On the Run Tour, The Mrs. Carter Show World Tour, the Grammy-sponsored Stevie Wonder tribute, and the Wearable Art Gala at the California African American Museum.

In 2016, Costello collaborated with award-winning costume designer Lou Eyrich to design gowns for Lady Gaga for the TV series American Horror Story, leading up to the team’s Primetime Emmy Award win for Outstanding Costumes For a Contemporary Series, Limited Series or Movie.

To see the schedule for the rest of the Fashion Week El Paseo event or to purchase tickets, visit the event’s website at www.fashionweekelpaseo.com.