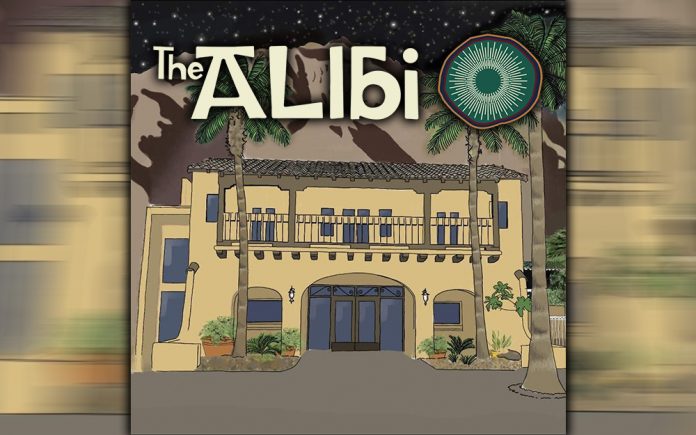 Finally, finally, Finally, The Alibi will re-open to the public the first weekend of April with a couple of stellar shows. Friday, April 1st, ex-Husker Du and Sugar front-man Bob Mould takes the stage. On Saturday, April 2nd, ‘90s alt-rock icons The Lemonheads will be on hand to celebrate the 25th anniversary of their breakthrough “It’s A Shame About Ray.”

The Alibi first opened their doors in 2019, located at 369 N. Palm Canyon at the historic, 1934 building that originally housed The California Water & Telephone Company. They immediately became the go-to venue for live music, booking nationally known acts as well as local favorites. Of course, as the club began to gain real momentum, the pandemic hit, effectively putting the kibosh on live entertainment, and like countless other venues across the country, The Alibi shuttered their doors.

In the interim, Owners Melanie Tusquellas and Liz Garo partnered with former WME exec. Marc Geiger’s company SaveLive, enabling them to stay afloat during the closure. It also allowed the time to make improvements to the décor along with installing a new stage and state of the art sound system.

Liz and Melanie both come to this endeavor with decades of experience between them. Liz booked talent for well-known L.A. venues like Spaceland, The Echo and The Echoplex. Additionally, she’s curated talent for the Getty Center and was a co-founder of the Echo Park Rising Festival. Melanie is the former developer and co-owner of the historic Edendale Grill & Bar and El Chavo Restaurant. Her first gig in the restaurant business began at age 16, when she worked for her dad, Bob Tusquellas, founder of the iconic LA Bob’s Doughnuts. Liz and Melanie became fast friends back in the early ‘90s when they both worked for the Restless Records label. They quickly bonded over a shared fondness for Mongolian BBQ and “7 vinyl.

When I met Liz and Melanie at The Alibi in 2019, I practically genuflected at their feet. I have been dreaming about an intimate club in the desert that showcased national and international acts AND also made room for local bands, since I was a teenager. That happened briefly in the early ‘90s with Mario Lalli’s late, lamented Rhythm & Brews club. But that occurred so long ago it almost feels like a musical mirage or a not-so-urban desert legend. I caught up with both of them recently to discuss what we can expect once The Alibi reopens.

Eleni P. Austin: You have made a name for yourself booking premier talent for the Echo, as well as other well-known music venues in Los Angeles, what made you want to open your own place in Palm Springs?

Liz Garo: “Palm Springs found us! Melanie and I had been looking at places in L.A. off and on over the years. We got close on a few, but for whatever reason, it never connected. A friend of Melanie’s told her about this building available in Palm Springs, as soon as we both saw it, we were both like, “uh-oh….. this is the place.” It wasn’t our intention to be in Palm Springs, but the deeper we dug into it, it started to make a lot more sense than L.A.”

EPA: We bonded over the fact that you managed one of my very favorite indie bands, Downy Mildew. How did you get your start in the music business?

LG: The best gig I ever had in the music business was working at a record store. My start was just being there, showing up and asking questions, acting like I knew what I was doing. Working with Downy Mildew helped me with a lot of introductions. I made contacts at KCRW, L.A. Weekly, clubs, booking agents, etc. I originally wanted to be a music journalist and dabbled in writing, but I didn’t have the discipline to be a freelancer. I would book different bands at various venues- I booked Weezer at an Irish Pub called Molly Malone’s. I started as a publicist at Restless Records in the early ‘90s-which is where Melanie and I met. We bugged our boss about signing bands- Grant Lee Buffalo, Ozomatli. He promoted both of us to A&R, and we would basically take bands out to lunch and then record shopping. When you’re starting out, you just do whatever, say yes so you can get your foot in the door, and then, hopefully, things build from there through chance, opportunity and connections.”

EPA: The Alibi opened in 2019 and I was really happy to see that you were booking well-known artists like Jim White, Imperial Teen, Jon Langford, Phast Phreddie & Thee Precisions and Best Coast, as well local legends like Sean Wheeler, Jessika Von Rabbit and DJ Day. You also curated residencies for desert favorites like Giselle Woo & The Night Owls and The Adobe Collective. Will you continue to provide this kind of cross-cultural exchange between (inter)nationally-known headliners and locally-known support acts?

LG: “100%. The goal and purpose has always been to give both locals and traveling acts a place to play. And it’s really quite self-indulgent- I selfishly book things that I truly want to see and hear. Of course, there are definitely those acts that you may not be a big fan of, but still understand their importance and place in the big picture. We don’t want to just book artists that are on tour. We need to take care of local acts as well. Being at The Echo and The Echoplex, witnessing the transition of Echo Park, certainly taught me the importance of community. As well as having a scene, and how that can give people a sense of place that they want to contribute to.”

EPA: Obviously, when you opened in 2019, you couldn’t have foreseen a worldwide pandemic temporarily shuttering businesses for nearly two years. I know you were open for just a bit in 2020, as a bar, sans live music. How were you able to keep the business afloat when you remained dark for most of 2021?

LG: “The pandemic and ensuing lockdown were both very big challenges. Melanie and I responded so differently; she was very aware of what was going on worldwide with the pandemic, and I was like, ‘hey, we have some down time, let’s redo our marketing plan. But it was extremely challenging, she and I had to recommit to the idea of what we wanted to do and how we were going to do it. It wasn’t easy and financially, it was very stressful. We had both been in careers that were all about bringing people together, so being told that we couldn’t had us both questioning everything. We had to get clear on what we wanted to do with The Alibi, which pushed us to focus on the music side of things more. We were able to connect with a new partner who understood what we both wanted to do and was familiar with what we had both done. It was basically a lifesaver and put us in a position where The Alibi now can be a lot closer to meeting it’s potential.”

EPA: What drew you to Palm Springs and the desert in general?

LG: “My experience had always been in the high desert. The two are both two very different experiences. But when I am in Palm Springs now it is never lost on me how beautiful the landscape is. I just find myself stopping and just saying ‘wow.’ It’s a really special place and it’s fun to discover it-and I am still doing it. All the cliches about the desert- big open spaces, magic hour sunsets, stars at night, the slower pace- it’s all true and reasons why people love it here.”

EPA: What motivated you to utilize a historic, nearly 100 year-old building? Wouldn’t it have been a lot easier to deal with a newer location?

LG: “Location, location, location…The historic Spanish style building between downtown and the Uptown Design District is perfect for us-it reflects our personal aesthetic and our nod to vintage anything. Melanie’s first restaurant in Silverlake was a Fire Station built in the 1920s. We are both fans of historical buildings. We could have found something with a more modern flair, but that wouldn’t have been us. The location, a historical building that was a telephone switchboard for Palm Springs that was run by women- the Spanish style…those were all elements that signaled to us that this place was meant to be. Being in a strip mall or a place with vinyl windows would not have resonated with us.”

At this point, Melanie joined the conversation. I asked her to weigh in, giving me the lowdown on what we can expect from the front of the house, since that is her domain.

MT: “We’re planning on featuring young, cutting-edge ‘Culinary Guests,’ mostly established chefs. Nightly, we will be serving food until 1am. During the day, we will be open from 12pm to 5pm. We will be doing something called ‘Lunch Box.’ It’s a fun spin on the old-fashioned lunch bag filled with treats. In the evening we will have Casual Chic Cuisine with approachable prices. Menus will rotate and include vegan options, creative culinary specials, comfort food and BBQ.”

EPA: I am very excited to see some of my favorite musicians like (ex-Husker Du front man) Bob Mould, The Lemonheads, The Blasters and N.R.B.Q. Can you tell me who else you have scheduled to play in the upcoming months?

LG: “We’re going to be rolling out some surprises over the next few months. I’m really excited about artists we’ve already announced like Hermanos Guiterrez, Les Filles and Doug Kershaw. The calendar will be eclectic, but hopefully the throughline will be discovering new talent, the legacy of older artists, and maintaining that level of quality. So even if you aren’t familiar with someone that’s playing, you know it’s going to be good. As we like to say- ‘let us be your algorithm and tell you who you want to listen to!’”

EPA: Finally, what are you guys hoping to accomplish with The Alibi?

LG: “I think what we want to accomplish has always been the same. It’s just taken real dedication to get here. The pandemic and venues being shut down was extremely difficult for our industry, so just to be able to open our doors is an accomplishment. We’ve always wanted The Alibi to be a community, a gathering place and a space to showcase all kinds of music and artists. It’s always been about having a safe and comfortable space people can come to, share an experience and conversation, have a drink, hear some music and for a moment, feel a sense of belonging and all is right with the world. It’s actually pretty powerful and can have a lasting effect.”