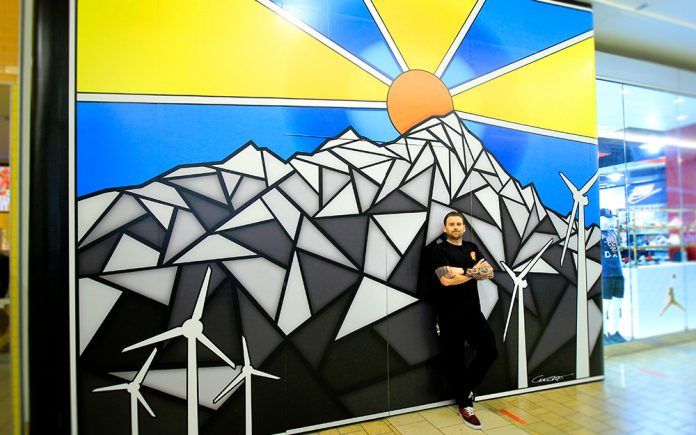 The Coachella Valley is home to several ornate murals strewn across its cities, providing a sense of colorful collaboration between the community and its artistic expressers. One local muralist, Cody Silva, a.k.a. Codezart (pronounced like Mozart), has been contributing original works on the surfaces of many desert locations, and as he prepares for his latest installment, CV Weekly has the scoop on this spray paint aficionado.

Silva was born in the San Francisco East Bay area, but considers the desert his home, as it is where he grew up and where he places his heart and memories. He originally started doing his current style of geometric, mid-century-esque murals about four years ago and over time his technique and style has evolved into the standard of which he showcases now. There are around 20 different Codezart murals in various businesses and personal dwellings all around the desert ranging from hotels, restaurants, barbershops, a metal fabrication shop, comic books stores, a pay roll company, and local Airbnbs.

“I’ve always been very fascinated by the entire art culture since I was a young child. What really got me into what I’m doing now is graffiti, originally. It’s nowhere near what graffiti actually is presently, but that’s where my love of it comes from. It influences me to only use spray paint for all the murals and canvases I’m doing to create the “street art” it has now formed into,” said Silva.

Silva’s favorite of his creations is located at the Westfield Mall in Palm Desert, situated at the Macy’s parking structure staircase going up from the second to the third floor. This particular mural represents a poignant and significant point in Silva’s life, when he made personal changes to better himself. The flow of movements coming out and through a very dark backdrop has been a spray painted symbol of redemption for Silva since it was made in 2019.

“When I truly get into painting a mural wherever it may be, I lose myself in it. It sounds cliché, but it’s where all the outside noise and daily stresses disappear completely for me. One hundred percent of my thinking is focused on painting. It’s really a beautiful thing,” explained Silva.

Currently, Silva has a new Westfield mural that is in the works. It is a digitally remastered version of another mural he recently completed, which is located on the bottom floor of the Macy’s parking structure. This piece is a collaborative effort between Silva and one of his close friends who digitized the design. The new mural will represent the trademark Coachella Valley sunsets against the peaks of the San Jacinto mountains. The location of the newest mural will be inside the mall on the second floor next to the Finish Line shoe store.

“Westfield and I have had a good relationship over the years. The owner of the local graffiti shop, ‘Flat Black’, is a guy named Pete. He was the one who originally introduced me to the mall’s potential. He orchestrates the annual STREET event on the third level of the Macy’s parking structure. He plays a big role with a lot of us local artists. The mall currently has multiple murals and canvases on display that myself and other artists have created throughout the building,” stated Silva.

Silva’s creative process has been described as ‘organized organic chaos’ because of the no-blueprint approach to his work. He organically uses different sizes of tape to start creating prismatic and triangular shapes until he naturally reaches a stopping point. Silva typically understands which colors he will be using in order to match whatever themes the businesses or homes he is painting for are requesting. Afterward, he spray paints the shapes with the various tones of colors either by blending the colors inside of each individual shape or having every shape be its own tonal color.

“The beautiful thing about this type of design is that it can really be used for any type of business because it’s so versatile…  I hope others get an understanding of what the desert feels like to locals that truly appreciate the valley for what it is when they see my art. I have lived in various places in various states, but nothing compares to the beauty of this place. I have grown to appreciate the desert very much over the years. So I hope they see its beauty as well with this particular representation,” said Silva.

Silva is always ready to challenge himself with his art, but his favorite memories to cherish are the times when he completes simple projects with his niece who wants to learn how to spray paint like her uncle. His ultimate goal is to have murals all around the world in different countries as well as getting his canvases into various art galleries.

“Find your natural calling on what type of art and tools you naturally like and just start doing it. Practice it for life. Things take time to get to where you want to be artistically, so be patient with yourself by understanding it’s a process. Use your art as a healthy way of expressing yourself through personal hardships instead of falling down a dark path of addiction or anything that can jeopardize your well-being. Art should be your drug,” advised Silva to aspiring artists.