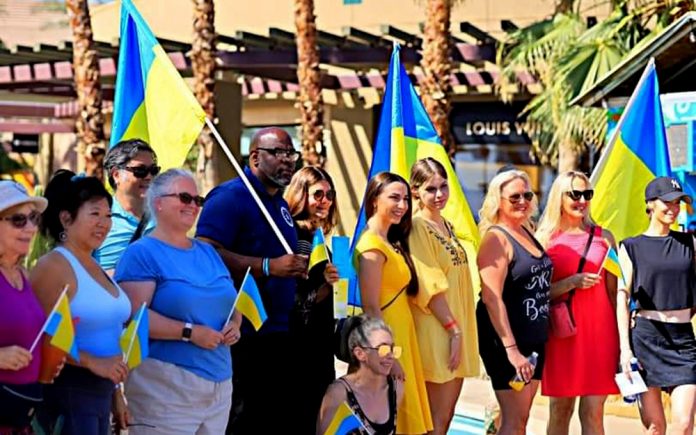 On May 14, a “We Stand With Ukraine” Walk on El Paseo took place to show support for the country of Ukraine as it undergoes extreme devastation from the Russian invasion.

On 24 February 2022, Russia launched a large-scale invasion of Ukraine, marking a steep escalation of the Russo-Ukrainian War, which began in 2014. As of this date, this has resulted in at least 46 thousand deaths, approximately 13 thousand non-fatal injuries, 600 billion dollars in property damage, and 14 million displaced Ukrainians, triggering Europe’s largest refugee crisis since World War II. 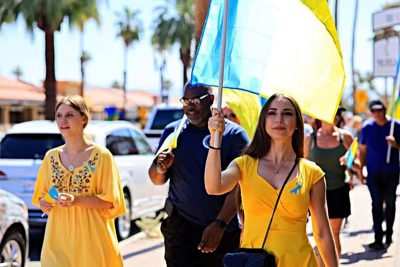 In the March 30, 2022, edition of Coachella Weekly, life coach and business owner at Send Me A Trainer Nadia Popova was featured, as her elderly mother and brother are still living in Ukraine. Since she cannot physically help her family leave the country, she extends her support by sending funds to them and sharing their story to others in support.

“I live here in the Coachella Valley. I know many people and thought my intention was to create awareness in the community,” said Nadia.

The “We Stand With Ukraine” Walk began at 9:30 a.m., in front of the fountains at the Gardens on El Paseo. Ukrainian flags were given to attendees for them to hold as Nadia gave a speech about why this was an important moment for her.

“I was very touched by the movement I was able to create. There were some people who didn’t know me personally but showed up anyway to show their support for Ukraine,” stated Nadia.

San Jacinto city council member Pastor Brian E. Hawkins was also in attendance to show his support for the cause and spoke before the walk began. 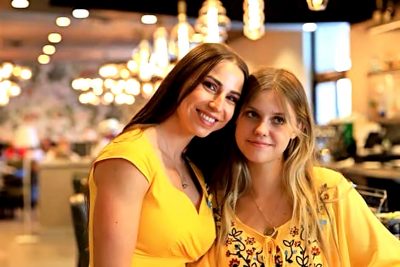 “When you look at the current condition we are in today, we are losing the war against humanity. We have become the divided states of America,” said Hawkins.

After the speeches, the group walked from the Gardens on El Paseo to Wildest Restaurant + Bar for brunch at 10:30 a.m. At the restaurant, a dance duet was performed set to Ukrainian music by the Nickerson-Rossi Dance company, choreographed by Michael Nickerson-Rossi, at 11:30 a.m.

Attendees of the Wildest brunch were informed about fundraisers and invited to donate to help families and children in Ukraine. Nadia is working directly with the charity “Zberezi Ditinu,” located in Ukraine, that sends help to those who are in need. The charity helps orphaned children, single mothers, and maternity hospitals in Ukraine that are in need of food, supplies, and support due to the Russian attack.

Sunflower greeting cards by Lynne Rachel Tucker were also available for sale, with every two dollars for every card sold going to help families in Ukraine. The cards are size 5×7, costing five dollars per card plus shipping and handling if applicable with no minimum. Zelle is accepted and can be shipped anywhere.

“It was my first event I have ever organized. I loved it. I love to take on a leadership role and create a movement. Speaking to the community through attending events, giving out the flyers and reaching out to people who I didn’t know was the most exciting,” shared Nadia.

Donations for Nadia’s GoFundMe pages can be found here for her family: https://www.gofundme.com/f/2kptnh-help-me-save-my-family?utm_campaign=p_cp+share-sheet&utm_medium=copy_link_all&utm_source=customer

The GoFundMe page to help Ukrainian children and families in need can be found here: https://www.gofundme.com/f/we-helping-refugee-children-charity-in-ukraine?utm_campaign=p_cp+share-sheet&utm_medium=copy_link_all&utm_source=customer