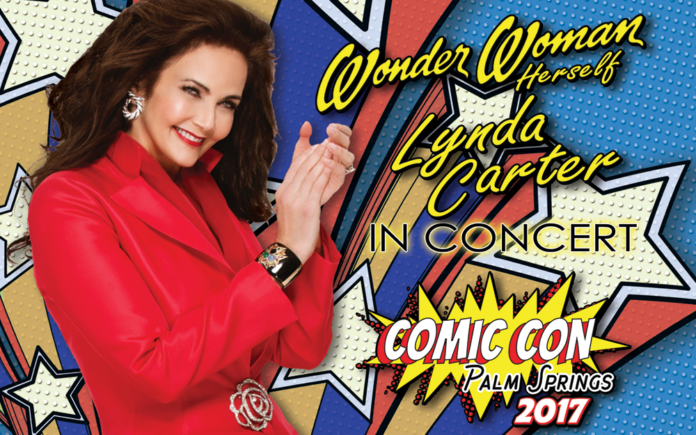 One of the most exciting and anticipated events to take place at this year’s Comic Con Palm Springs is the musical performance of Lynda Carter, TV’s original Wonder Woman. The event will take place on Saturday, August 26 at 8pm in the Convention Center.

This is Carter’s first time attending a Comic Con. She says she doesn’t believe in just sitting at a table and selling her autograph. She decided to do this Comic Con because founder Christopher Spellman offered her the opportunity to perform.

For those that are only familiar with Carter as the iconic TV character, Wonder Woman, from 1974 to 1979, you might be surprised to learn about all of her other endeavors and accomplishments. She started singing at the tender age of 14 and by the time she was 19 was singing in Las Vegas, even though she was too young to be there and gamble. Ironically, there are now slot machines with her face on them in most casinos.

In 1972 she was crowned Miss World. For over a decade she was the spokeswoman for Maybelline cosmetics. After taking time off to raise her two children, who now, are both successful adults, both with law degrees, she returned to performing. She has appeared in several other TV shows over the years including “Partners in Crime,” “Hawkeye,” “Law and Order” and “Two and a Half Men.” This year she has a role as the President of the United States on the popular CW series “Supergirl” and she will be seen in the upcoming “Super Troopers 2” movie.

She has recorded several CDs including, At Last, Crazy Little Things and most recently The Other Side of Trouble.

She is also involved in several charities and has been the recipient of numerous honors and awards including one given her this past May when she was presented with the Lifetime Achievement Award by the Alliance for Women in Media (The Gracies) for her pioneering role for women in television. A long-time advocate for equal and human rights, Carter has supported many charities including as a founding member of the National Race for the Cure (for breast cancer research), and for such other organizations as Father Martin’s Ashley, the U.S.O, Red Cross, Ronald McDonald House, God’s Love We Deliver, GLAAD and many other charitable organizations. Proud of her Hispanic roots (her mother, Juana Cordova Carter was of Mexican descent) she was presented the Raul Julia Award from the National Hispanic Arts Foundation in Washington, DC last year.

In April of 2018 she will receive a star on the Hollywood Walk of Fame, which she expressed much excitement about during an hour long phone interview we had this week. Much of our conversation was like two old friends hanging out and not like a typical interview. One of the things I came away with after our talk, is that Lynda Carter in her own personal life, is very much like the character she played on TV: strong in her opinions, a true supporter of other women, a nurturer, and a sense of humor I wouldn’t have expected.

Married to husband Robert Altman for 33 years, I asked Carter what the secret was to having a successful marriage that has lasted that long with her being in show business.

“Well my husband truly is a remarkable guy. He’s a well-educated, solid, brilliant, loving, tough, successful guy. We’ve been through a lot; trauma, difficult times, tremendous great wonderful times. When you go through things and you can talk about them and you both want the same things, you can get to the other side of it. If you can ask each other ‘what is it you need that you’re not getting from me’ and vice versa then you can get through anything.”

I asked her if it ever gets old being called Wonder Woman?

“Well now I have company,” she laughed. “We were trading emails yesterday (her and the current Wonder Woman Gal Gadot) and I told her ‘now I’m not alone. I’m not the only one.’ And she said ‘I’m so happy to be here for you.’ And we both laughed. Patty (Jenkins, the Director of the new Wonder Woman movie) and Gal and I have a soul sister triad.”

I mentioned that I had read that Jenkins had asked Carter for her blessing on the movie and Carter replied: “She didn’t need it. Patty Jenkins did not need my blessing. She was happy to have it, but did not need it. She has it all and so does Gal.”

When I mentioned that they couldn’t have cast a better successor for the Wonder Woman role Carter totally agreed.

“What is the equal phrase for bromance?” she asked.

I came up with ‘womance’ and the new term was coined as much laughter ensued between Carter and myself. 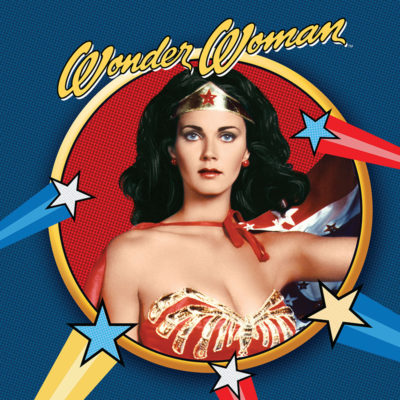 “I have a soul sister womance with Patty and Gal,” she said with much affection. “ My daughter said to me the other day ‘Mom it’s like you’re in love with Patty Jenkins.’ And I said ‘I am.’ As far as I’m concerned we are joined at the hip and friends forever. I am their champion forever. They are incredible women and mothers.”

I asked her what she thought of Gadot’s performance and what she brought to the Wonder Woman character.

“She brought the sweetness, the kindness, the realness and the humor to Wonder Woman. She was brilliant.”

Carter truly has the real Wonder Woman mentality in her own life as a role model and advocate for women’s rights.

“We don’t need men to be a feminist with us. We love our men and we want them to be who they are. We just want them to stand beside us and champion for us.”

I knew she had been writing her own original songs for years, but I was curious how she got started in the video game business.

“I started about 15 years ago. My husband bought a video game company and the guys over there asked if I would help them with voice overs and songs. So my husband said ‘I don’t know ask her.’ And they did and I said yes. Then they asked ‘what do we need to pay her?’ and my husband said ’you don’t have to pay her.’ And I told him…’Robert, I am a member of SAG. You have to at least pay me scale,’” she laughed.

I asked her if she preferred acting or singing.

“I enjoy both and get nervous doing both but I really do love the theatre and singing live on stage,” she shared. “There is no veil when performing live.”

“We have 10 musicians that will be on the stage with me at the Comic Con show and I have a special guest, my daughter, who will be performing 2 duets with me. She just passed the bar and will be joining a top tier Washington D.C. Law firm starting in October, so I’m really proud of her. Both of my kids performed on my latest album on a country song I wrote called “On the Other Side of Trouble.”

Carter continues, “I have the most amazing writing team and singers and musicians that I work with. They have all either won Grammy’s or performed on Gold or Platinum selling records. So when I do concerts if I can’t get all of them on board then I don’t do those dates. Once you’ve worked with the best, why work with anyone less.”

When I asked what genre of music she likes to perform most her response was interesting.

“I have been put in a box my whole life; too tall, too pretty, you’re Wonder Woman, a sex symbol, blah, blah, blah. So when I’m on stage I can sing whatever I want. I don’t have to stick to just performing my hits… because I don’t have any (laughing), so I can just enjoy. My last album is full of all types of music. When I bring songs to my band I give them an idea of how I want it to go and they run with it,” she shared.

She likes to do her own arrangements of popular hit songs. I was sworn to secrecy as she sang a song for me that she will be performing at the show. She asked me to guess the song. Being the huge trivia buff I am I was a bit embarrassed it took me a bit to guess the song. However, she took this popular Motown song and made it completely her own, which I loved! I can’t wait to see this iconic Wonder Woman perform in person.

There are several ticket prices and packages to see Lynda Carter. See details below and go to www.comicconpalmsprings.com to purchase before they run out.

• Champagne and Beverages at the table

• Autograph on any 1 item that you bring (Only 1 item)

• One Personal Photograph with Lynda

You can also purchase tickets to see Lynda Carter for 85.00, 55.00 & 35.00 at the Palm Grove Ticket Window in front of the Convention Center. These prices do not include entry into Comic Con, only the concert. Please go to www.comicconpalmsprings.com for more info and complete seating chart.