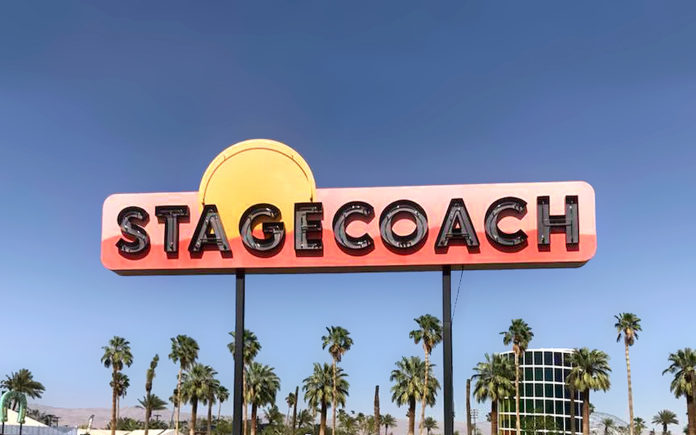 Had you asked me back in 1992, a soon to be single mother of four children, if I thought I might meet, much less speak to country phenoms, Garth Brooks and Trisha Yearwood one day, I would have giggled and moved on to the more realistic conversation about me becoming an astronaut.  Today, I am mailing in my application for NASA and packing for the moon, because Sunday, April 29, I met them.

Allow me to set this up for you so you can understand the impact this past weekend has had on this humbled writer. In 1992, both Trisha and Garth had made the “A” list in Nashville.  Trisha and blown in to Nashville, Tennessee from Georgia, and Garth from Oklahoma.  They were key players in the resurgence of Nashville after “Music City” had gone through a long season of lack-luster.  I on the other hand, was trying to set a record of my own having just had my fourth baby in eight years, and the reality of becoming a single mom was on the imminent horizon.

When my kids were down for their nap, I would sit on the bathroom counter (on account of the acoustics of course) singing to Reba, Bonnie Raitt, Maria McKee of Lone Justice, and of course, Miss Trisha Yearwood.  Her songs, “Wrong Side of Memphis,” “Walk Away Joe,” and “Down on My Knees,” were my anthems, and everything I needed to not feel alone during a very tumultuous time in my life.  Little did I know that by 1995, I’d be singing those very songs in clubs with a band of my own.

I saw Garth Brooks at the Selland Arena in Fresno in August of 1997.  I had never seen anything like him.  Neither had anyone else. The man left an impact like no other.  For an encore, he came out, just him and a guitar and sang Bob Segar’s “Night Moves.”  It was riveting.  It has affected me as a performer to this day.  The man went on to be outsold by only two other acts – Elvis Presley and The Beatles.

Let me now take you to the press conference that turned meet and greet with both of these people who unknowingly altered my life in an intensely positive way.

The country power couple walked towards us holding hands. I was a bit taken aback by… how should I put this… their “lack” of an entrance.  Their demeanor was that of a couple who had shown up just a couple minutes late to the neighbor’s house for dinner, hurried only because they understood that time was limited, and they wanted to be able to address and accommodate everyone.  As Lukas Nelson and The Promise of the Real’s music blared from the neighboring Palomino Stage, Garth addressed us, thanking Goldenvoice and set up the conference himself, saying, “We’ll just do questions and answers if that’s ok. It’s much easier for Miss Yearwood and I to talk ‘with’ you than ‘at’ you, if that makes any kind of sense…so if you can just identify yourselves so we know who we are talking to, that would be great.” 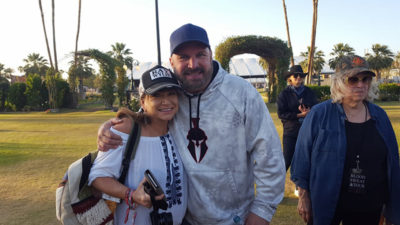 I was literally sitting on the edge of my seat had begun raising my hand and pulled it down a few times before the opportunity finally availed itself.  And then it happened.  Garth pointed at me and said, “Yes, ma’am,” as he gently touched his wife’s arm and moving her with him closer toward me. “Lisa with CV Weekly,” I announced, in a pitch that is not my regular speaking voice.  “Hi Miss Lisa,” Garth responded.  I stopped breathing.  Gasping and blurting (because I’m cool like that), “Are you planning on paying any fines tonight,” I asked.  He and Trisha both laughed, as did a few of the other press members. Garth stepped toward me again, smiling, “She wants to know if we are going to be paying any fines tonight.”  With his hand on his heart, he answered, “We are law abiding citizens so yes, if we go over, we will pay them.” At this point, I could die with no regrets.

The Q & A went on longer than the five minutes planned.  The couple made sure that every person seated had a question answered. Garth would move toward, shake hands or even hug the person he was addressing when questions were asked of him.  When a question was asked of Trisha, he would step way back, giving her the stage, so to speak.  Trisha spoke of her upcoming album, when asked. “I’m just having the best time.  This is the first time in a long time that I’ve had a chance to just to find songs I love and go back into the studio.  I’m back in with my longtime producer Garth Fundis, another Garth, who I made most of my records with throughout my career. I just feel comfortable; it feels right; it’s fun. He can tell you (gesturing to her husband) that I’ve come home at night and said, ‘I’m having the best day,’ it’s just so much fun. We have surprisingly found a lot of songs that we really like. I was thinking it was going to be a lot tougher. So hopefully it will be done sooner than later… I’m not making any wild departures, it’s Trisha music.”

The humor in their relationship glowed when they were asked which song they looked forward to performing most.  Garth, with gratitude for the songs he’s breathed life into, rattled off a rapid-fire list of songs during which his wife interrupted with, “Good God.” We laughed and then cheered as she began rattling off the list of her songs.  “Ease,” is the best word I can find to describe them both. They never tried to be gracious, they just were.  They didn’t try to be inspirational, they were simply inspired themselves.  And they were not trying to be America’s most ideal couple, they just are.

Eventually we got to the “One on One’s,” a term I pretended among my peers to be familiar with (it’s where we would each get to have a private moment with them). I had no idea what to expect when I arrived so yes, the idea of one on one time with Garth and Trisha was a mind bender.  But having gone overtime during the formal press conference, they began grouping people together as we waited in line.  I was luckily grouped with my friends Tommy Cee and Brian Garris of Alpha Media. I asked Garth who his favorite songwriters were. He went on to list the veterans he’s had the pleasure to work with including, “Kim Williams. I miss Kim Williams to death, but his stuff lives on… Guys like (Tony) Arata and Victoria Shaw – all those people that I was lucky enough to write with. Then there’s the newer guys like Ashley (McBride)…Karyn Rochelle (he and Trisha’s backup singer who has penned songs not only for Trisha Yearwood, but for George Jones, LeAnn Rimes, Ronnie Milsap, Reba McEntire, LeeAnn Womack among others) and there is a new kid, I’ve never mentioned his name before – get ready – this kid is unbelievable. His name is Randall King.  Be watching for him.”

It’s gotta be a hell of a thing to get a shout out from The Garth, but it may also be insight to what kind of music gets the attention of one of the most dominant forces in country music today. 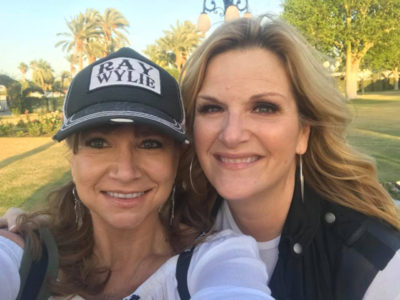 As things begin to wrap up, I had a moment alone with Trisha Yearwood. I was so at ease at this point, only because she was, it was like catching up with a longtime, beautiful friend.  I let her know the impact her music had on me and thanked her for helping me find my own voice.  She was clearly touched by that. The eye contact was intense. “Thank you for sharing that. That truly means a lot to me.  I know how much Linda Ronstadt affected me, so I know what that means.  Thank you.” Then we gushed together about Miss Ronstadt until she was pulled away.  I loitered.  I literally loitered, afraid to leave, not wanting to EVER leave, afraid of missing something. But alas, Aron who had the ominous job of keeping things on schedule, gently let me know it was time.

I stood way back in the “cheap seats” and watched the concert on the big screens, moved to the core of my being. Trisha was very much the same woman on that big stage as she was in the rose garden as we chatted, fighting the wind and her hair like any woman but with a voice as warm, pure and big as it ever was.

Garth on the other hand – something happens to him when he hits the stage.  He’s still the same guy, down to earth with a touch of restless energy. But on stage, it’s like he switches on the NOS.  He is what pure joy and love look like, fueled by a song.  “It’s all about the song,” he said over and over like a preacher at a tent revival and we all believed.  We drank that Kool-Aid and then we raised our glasses and drank more, singing every word to every song. I think Garth only sang half the concert.  The rest was all us, all one voice. We were with Garth and Garth was with us.

He yanked Lee Brice up on stage who was just there to see the show, bragging on him as a songwriter and how there’s nothing like hearing a song from the one who wrote it.  A flabbergasted Brice muscled his way soulfully, trading verses and adding harmonies to the 2007 Billboard chart topper he co-wrote, “More Than a Memory.” 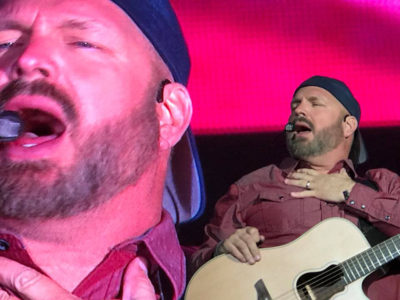 At the peak of it all, he reached out to those who were attending that had also been at the Route 91 Harvest Music Festival.  “Welcome to the healing process,” he shouted as we answered back with deafening cheers.

God bless the sound crew. The wind toyed with the sound, bending notes, pulverizing the low and high ends of the sound waves, but because Garth is who he is, and we love him for it, it truly had no effect on those of us who would have stayed with him through a tornado.  He and his incredible family of musicians gave us all they had until 11 pm.  There would be no fines paid tonight, but what we had been given was priceless. I walked away with a revival in my heart, not just for the genre, these two people and their music, but of hope and purpose. I was lifted and challenged with the idea that one person can make an incredible impact simply by being and doing who they are and doing what they were created to do, fearlessly and yes, “shamelessly.”