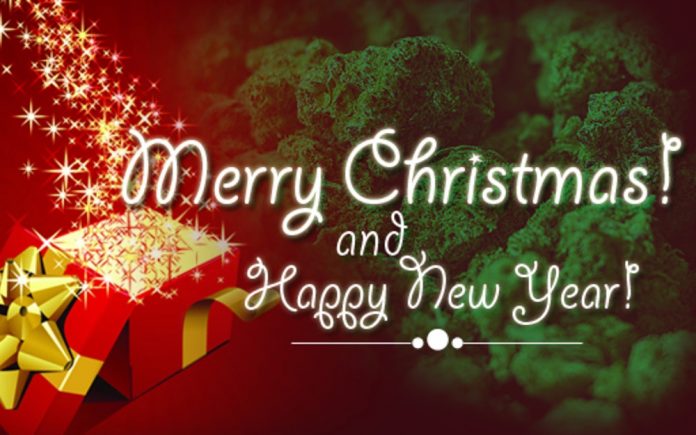 Christmas cheer to all my readers throughout 2021. Let us celebrate by partaking in a Christmas Tree strain of cannabis. The growers it is believed, took this beautiful batch of Pine OG, a unique OG phenotype that smells and tastes exactly like a Christmas tree and named it Christmas OG. The buds are beautiful and come highly recommended by some of the best medical marijuana growers in Southern California. Despite not knowing the strain’s parents, we can still learn a lot about where this strain came from and what to expect when medicating with it. For instance, the tight, condensed bud structure is reminiscent of popcorn. This is a tell-tale sign of any OG Kush phenotype. Most tend to be Indica-dominant, producing a heavy feeling, although each batch of OG will be different depending on the specific phenotype you have.

On a more serious note, Proposition 64 was passed into law to expand the growth and sale of cannabis in a way that drives out the illicit market, discourages use by minors, and abuse by adults. However, two dozen executives, and industry officials are claiming they can no longer compete with the widespread illegal economy when prices are far lower, and sales are double or triple the legal business.

These leaders sent a letter to Governor Newsom urging him to immediately lift the cultivation tax placed on growers, grant a three-year holiday from the excise tax, and an expansion of retail shops throughout much of the state. The letter has been published as part of a Change.org petition urging immediate action. SIGN THE PETITION. Hundreds of California cannabis farmers are choosing to let crops rot in the fields rather than risk a money-losing harvest or letting it return to the illicit market. Now, the California legislators are wanting to impose another cultivation tax of 5%.

Compare cannabis taxes to wine grapes almonds or raisins. It is not possible, because no other agricultural product has a cultivation tax. Other agricultural industries are supported by federal crop subsidies to protect family farms from market fluctuations that could put their homes and livelihoods at risk. We are a long way from expunging the stigma of the marijuana stoner instead of a miraculous medicinal plant.

The good news is 2021 saw a tremendous positive change in the industry. Ryan’s law was passed to allow terminal patients the use of cannabis if they become admitted to a hospital. Currently, due to federal law, health institutions that receive money from the government, prohibit the use of cannabis. Go to this website to see all the proposals and laws updated in the U.S. https://en.wikipedia.org/wiki/List_of_2021_United_States_cannabis_reform_proposals

We in the cannabis industry are hopeful for these ambitious goals in 2022. Sending letters to legislators does work to influence change. First the elimination of pre-employment marijuana testing on urine and hair should be enacted. These tests do not predict job performance. Second, the reason marijuana costs so much is the burdensome taxes. Let us vote to remove these taxes for medicinal use.

Next eliminate the prohibition of vaping marijuana at home if living in a government-subsidized housing. End this discrimination to the elderly. Write to your congressmen. The laws for cannabis should be no different than the laws for smoking. Elderly users of medicinal cannabis should not be prohibited from vaping or ingesting while living in assisted living facilities or subsidized housing. These apartments are their only home.

There are too many local bans on cannabis businesses. Local voters should call their supervisors, mayors, and council members to share their views that medicinal cannabis should be equally accessed. There are several bills in the Senate and Congress that have very few cosponsors. Senator Feinstein has not cosponsored all the bills pending on cannabis reform. Make your representative accountable. Ask why he/she is not supporting removing federal prohibition.

In the spirit of the season giving donate some medicinal cannabis for an elderly person or veteran living in your neighborhood. Merry Christmas and Happy New Year.

Ruth can be reached at cannabis16@gmail.com