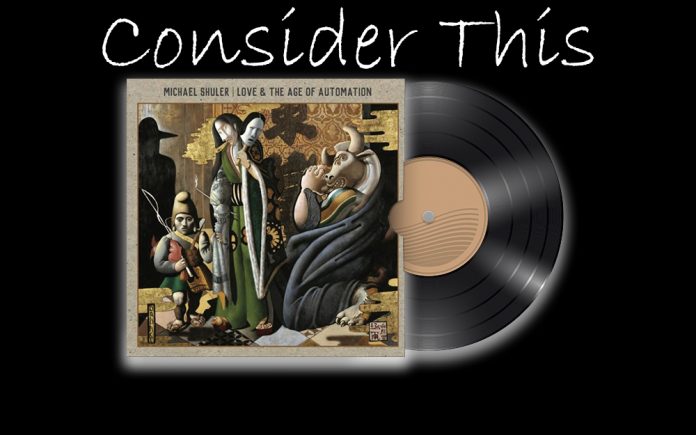 Michael Shuler was born in Portland, Oregon, but he grew up in the shadow of the aerospace industry in Los Angeles. Although his parents’ musical tastes leaned toward Country, Folk and Classical, like most kids his age, Michael was blown away by the Beatles and the subsequent British Invasion. He refers to his seminal musical influences as “The Four B’s: Bob (Dylan), Brian (Wilson), The Beatles and The Band.”

Michael was a restless pupil, but thanks to the patience of a his worldly teacher, he picked up the rudiments of piano while he was in elementary school. He taught himself guitar a couple years later. Something of an autodidact, his learning curve took place between “Like A Rolling Stone” and “Anarchy In The U.K.,” and he soaked up everything in between. Relentless woodshedding meant he mastered a variety of musical idioms. His hard work paid off; he was able to shred like Clapton, nail 12-bar Blues, or finger-pick intricate Country licks.

A singer-songwriter at heart, he was quickly sidetracked by L.A.’s thriving Punk scene. Forming a band that started life as Lt. Elmo and then became Radio Bandits, they gigged at (soon to be infamous) spots like Hong Kong Café, Madame Wong’s, Club Lingerie and The Londoner. A debut EP was released in 1982 and featured two infectious anthems, “Suzy” and “Cellophane Girl.” Although they should have been hits, the songs never really caught fire. The band persevered, their sound evolving, becoming more dense and intricate. But they couldn’t catch a real break and broke up in the late ‘80s.

By then, Michael began honing his craft playing acoustic gigs around town, which resulted in his first solo effort, Montgomery Road. He managed to earn his keep as an in-demand studio musician. Ready for a change of scenery, he relocated to Seattle just ahead of the Grunge explosion. In full singer-songwriter mode, he plied his trade live, opening for luminaries like Mark Eitzel, Gillian Welch, Peter Case and Rosanne Cash. He fell in with an ad hoc wolfpack of players that straddled the line between Rock and Country and added album production to his musical resume.

For the next several years he worked behind the scenes, producing and engineering music almost exclusively for the Glitterhouse Records label. He formed a lasting working relationship with Scott McCaughey (Young Fresh

Fellows, R.E.M., Minus 5, Tuatura and The Baseball Project) He started work on his second solo album, but health issues sidelined him for a few years. Edge Of The World finally surfaced in 2009. Not long after, he returned home to Los Angeles.

Back in L.A., he established a studio in San Pedro, reconnecting with old friends and playing events like the Wild Honey Tribute concerts. Pretty quickly, he began concentrating on recording his new solo material. Although he handled most of the instrumentation himself, Michael recruited Gary Ferguson and Dean Moore on drums, Scott McCaughey, Fernando Perdomo, Gene Libbea and John Pierce on bass, Marty Rifkin on pedal steel, Jeff Watson on lap steel and Lou Mannick on musical saw. John Ramberg, Bill James, Will Matthews, Carolyn Wennblom and Sheila Harley added backing vocals. The result is his third solo outing, Love & The Age Of Automation.

The record is front-loaded with the first two singles, “T-Shirt, Blue Jeans” and “Never Girl.” The opening track is a slice of primitive cool, powered by chunky rhythms, rubbery bass lines and rumbling guitar riffs. Michael’s vocals sound sinister one minute, sincere the next, with his intonation, sandwiching somewhere between Lou Reed’s sneer and Tom Petty’s nasal drawl. The lyrics lean toward “just the facts, ma’am” reportage. The opening couplet deftly sets the scene; “She had Neil Young on the Hi-Fi, ‘Last Trip To Tulsa’/She put on ‘Blood On The Tracks,’ I wanted to cry, Lord, she made my pulse run.” The sultry and subterranean feel is accented on the break by prickly guitar licks, and a “Peter Gunn” flavored throb.

The melody of “Never Girl” is sort of a kissing cousin to the classic Paul Collins Beat cut, “Different Kind Of Girl.” What Michael lacks in Snap, Crackle, Pop, he makes up for with guitars that attack and retreat, pensive bass, slightly squeal-y keys and a click-clack backbeat. The mood is melancholy as he obsesses over the girl who never was; “I walk the streets and see you everywhere, I turn and you vanish in the air/I look to find you but you’re not there, you’re nowhere, Never girl.”

Musically, this album skillfully cycles through a surfeit of styles. There’s a thin, wild, mercurial quality to both “The Ballad Of The Great Wheel” and “You (The Shudder Of Impermanence).” If the Partridge Family and The Band ever collaborated, it might sound a bit like the former. Loose-limbed and Folksy, the whole enterprise is powered by filigreed fretwork, nettlesome keys, sly accordion and a mid-tempo meter. Slightly cryptic lyrics cast a suspicious eye on progress; “Man was meant to walk on stone, like birds were meant to fly.” But the arch skepticism is nearly washed away by the tune’s rustic Pop prettiness.

The latter opens with ringing bells and ambient street sounds that fold into an arrangement featuring razor-sharp guitar riffs, fluttery ukulele, tart piano, see-saw accordion, Stylophone and Moog accents. The wordplay is labyrinthine and Michael curls his lip over each syllable, as he addresses an ex; “You, with my head on your platter, your invisible chatter, smiled your Mona Lisa smile…You, with your fratricide breath, your parasite mouth and your disdain for all that’s true.” This ruthless excoriation is matched on the break by slashing guitars, keys that bleat, pulsate and swirl and some rather incongruous choir boy harmonies.

Both “Slinger” and “Belle Starr” walk the (fine) line between Country and Rock. Lyrically, the dusty tone poem of “Slinger” takes its cues from Zane Gray or Louis L’Amour, by sharing the cinematic saga of a conflicted gun fighter; “To some he is a hero, though admired, he kills for hire, what kind of man would go that route.” Plucky banjo notes and gilded slide guitar connect with mandolin, whispery strings, keening saw, all atop a thudding down beat. Beatlesque harmonies at the close give the song an ethereal edge.

On “Belle…” the ghost of Belle Starr, of the Queen of the Oklahoma Outlaws, is summoned as something of an avatar. Barb-wire guitar riffs ride roughshod, tethered to gnarled bass lines and a measured beat. The lyrics offer a rotogravure portrait of a woman who “Could be a queen, covered in garlands and pearls, but a flea market soul keeps calling her home.”

The best tracks here arrive back-to-back in the middle of the record. Both feature the sui generis vocal talents of Syd Straw. Although she has only recorded three critically acclaimed solo albums over the last 30 years, Syd has made her mark, singing with everyone from Dave Alvin, the dB’s Los Lobos, Jimmer Podrasky, Rickie Lee Jones, Loudon Wainwright and Wilco. Something of a musician’s musician, she calls Vermont home, but she typically spends each Spring in her Hollywood hometown, recording with old pals and headlining at McCabe’s and other venerable venues. She also participates in the annual Wild Honey extravaganzas. It was at one such shindig that she connected with Michael. He had a song that cried out for duet treatment, that song is “The Dividing Line.”

Something of a high lonesome lament, the song blends plaintive pedal steel, stately keys and wistful guitars, buttressed by tensile bass and a tick-tock beat. Michael and Syd trade verses, George Jones/Tammy Wynette style, inhabiting a couple at a crossroads. Unable to articulate their marital misery; “We used to talk all the time, we used to talk until dawn, there was never a question of whose side we were on/You can hope for the better, you can hope all night long, but they don’t call them memories until they are gone.”

Less bleak and more sleek is “In A Talking Dream.” Here kinetic percussion is wed to walking bass lines, supple clavinet, shimmery keys and cascading guitar riffs. Syd’s harmonies shadow Michael’s as he unlocks a Noir-ish fever dream; “I saw you at the window, in a blood red satin gown, I curse these broken hands, I curse the modest husband, buried in the river sands.” The arrangement and instrumentation idles at the same early ‘80s intersection where Tom Petty got lucky and Romeo Void’s Debora Iyall obsessed over her sister’s new shag haircut and limp white sweater.

Other interesting songs include the brittle instrumental “Hubble” and the lovelorn Reggae of “Step Up.” The album closes with the dystopian lullaby that is the title track; electric and acoustic guitar lattice slide guitar, plinky keys, wily bass lines and a feathery beat. Slightly opaque lyrics sketch out a love story thwarted by technology.

Love In The Age Of Automation is Michael Shuler’s finest hour, distilling his seminal influences into a heady, and wholly original brew. The melodies are crisp and memorable, meanwhile, arrangements and instrumentation veer from economical to extravagant and the lyrics are rich and nuanced. 10 years is a long time between records. But it was worth the wait.