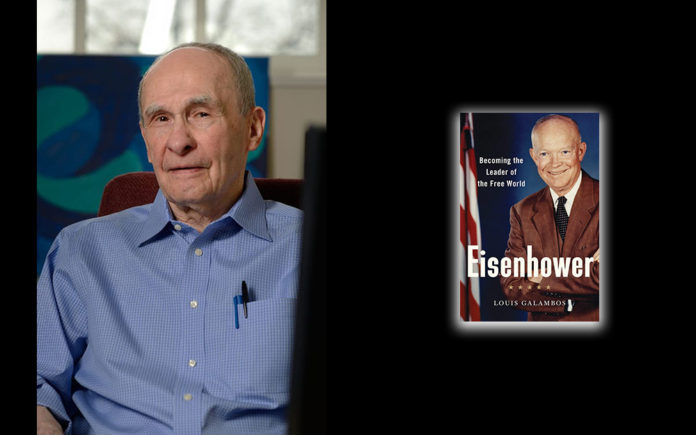 Divisive politics saturates our culture.  The Federal government shut down!  While history is being made, it seems it’s also being forgotten.  Eisenhower: Becoming the Leader of the Free World by Louis Galambos (John Hopkins, 280 pages) reminds readers of the qualities it takes to become a respected world leader.

In celebration of the 65th anniversary of President Dwight D. “Ike” Eisenhower’s inauguration, it is apropos to revisit the man who became a five star general and the 34th President of the United States.

Author Galambos is a history professor at John Hopkins University and the long-time editor of “The Papers of Dwight David Eisenhower.”  The biography reveals the details, turning points and changing circumstances that formed Eisenhower as a person, his career in the military, and his political life.

The book begins with Eisenhower’s parents and early family life in Abilene, Kansas.  Ike’s mom and dad met in their second year of college and then dropped out.  Finishing high school and having any college education at all, was more than most people had accomplished at that time.  Ike’s dad worked 14 hour days, six days a week for $55!   The family literally lived on the wrong side of the tracks.

Born in 1890, Ike grew up with five brothers who were tough and competitive.  His sibling rivalry with his older brother Ed and his father’s harsh judgment significantly impacted the boy as he became a man.   His mother encouraged patience, self-control and education as a way to better one’s self.   She was loving and kind.

Ike realized that the only way out from his life of poverty was hard work and a college education.  He turned to the military and was accepted at West Point.

According to Galambos, Ike had a problem with authority and found the strict rules unjust.  But, Ike was well-liked by his peers and was a good student.  After graduating, Ike was regularly assigned to small military training bases where he was always appointed the football coach.

Frustrated with his position, Ike and his recruits were ready for WWI, but never had a chance to go overseas.

Ike wrote a paper on tank warfare and saw the need for new techniques to prepare for another war he saw was inevitable.  His ideas were not always appreciated.

Eisenhower’s future changed when he served in Panama with Fox Conner who became a mentor and father figure.  Conner helped Ike understand the army’s insider politics and taught him the discipline necessary for a military career.

Eisenhower also served as Douglas MacArthur’s assistant in the Philippines where he learned valuable lessons.  Ike was pals with George Marshall, Omar Bradley and George Patton.

Ike believed in planning and strategy and after years of service was given a role in the war against Hitler and his army.  Ike loathed Fascists!

Starting in North Africa, Eisenhower took the reins and became a commanding officer proving he was a strong and skilled leader.  Ike rose to Supreme Commander, orchestrating D-Day and leading the Allies to victory on the Western Front.

Eisenhower: Becoming the Leader of the Free World is a fascinating read that brings history to life in new and refreshing ways.  I rooted for the young boy and identified with his resentment towards authority.

At times, the book reads like a thriller as Eisenhower is faced with tremendous decisions all while juggling political rivals, global power struggles, bad weather, lack of supplies and risking the lives of thousands of men.

I respected Eisenhower as a warrior.  He never took for granted the death of a single man under his command.  He was not egotistical and disliked those who put their personal interests before the Nation’s.

As a politician, the lessons from the World Wars and his time as the leader of NATO, gave Eisenhower new insight into global politics and problems.  He had two major goals for America: the pursuit of prosperity and peace.

Eisenhower always took responsibility for his decisions and owned his mistakes.  Serving as Commander and Chief from 1953 to 1961, many of the pressing issues during his time in office — the Cold War, North Korea and the Middle East — continue to foment today.

Galambos does a wonderful job presenting the challenges Eisenhower faced in his personal life and career often using Eisenhower’s own words.  The author reveals a man who was able to carve out a path for himself, and for those he served.

Ike believed in coalition building.  He sought a middle way with compromise and he led with optimism, wisdom and a big picture view of a changing world.

Local residents are familiar with the superb nonprofit hospital and its medical facilities across the Coachella Valley that bare Eisenhower’s name and the iconic red, white and blue five-star logo.

Galambos’ biography provides a wonderful opportunity to better know and understand the great man Eisenhower was.  Reading about Ike and the world that shaped him, and that he in turn helped shape, is inspiring.